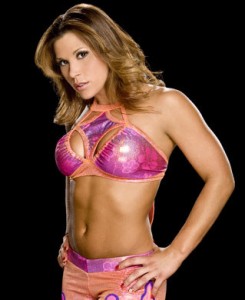 Ahead of her big title match with Tara at TNA’s Final Resolution pay per view on Sunday, Mickie James joins Diva Dirt to discuss her recent comeback to the ring after a major health scare, her illustrious career in wrestling as one of the most decorated women in the sport, her latest music video featuring WWE icon Trish Stratus, her thoughts on Beth Phoenix‘s retirement and much more.

Mickie also opens up to us about working with Trish in that memorable feud in 2006, working with Lita, and how she was almost paired with CM Punk on WWE television.

Listen to the interview here: http://www.diva-dirt.com/2012/12/08/mickie-james-interview-tna-wwe-trish-stratus/

Speaking for the first time about having a benign tumor removed, she said: “It was pretty scary. I didn’t get into a whole big ordeal as far as my surgery went because it was so scary and very personal, and kind of humbling in a sense. In this industry, we’re so accustomed to fighting off pain or negating it, and working through it, sometimes we don’t take little things very seriously. Most times when we think of getting hurt or having to go to the hospital, it’s usually for to do with an injury in the ring, so for it to be for something personal and to have this mass… and thank God it was benign.”

On possibly winning her ninth major championship at Final Resolution: “It would be incredible. They always say though, if you’ve won the championship eight times, it means you’ve lost it eight times. At the same time, I can say anytime I’ve won the championship, it’s been monumental for me, for my career. The matches have been incredible. And anytime I’ve lost it, I can say the same. I’m definitely going to go into this Sunday full steam ahead with a purpose. I really want this Knockouts Championship. […] It’s often negated how much that championship means to us, because it truly means at that time, at that point, you are the best.”

“I know that Trish’s record — no one will ever capture that, winning the Women’s Championship seven times, especially now it’s retired, but hats off to her. She’s an incredible woman and athlete.”

On nearly being called up with CM Punk in WWE: “I was supposed to debut a few times [before debuting as Trish’s fan], and even debuted with Punk on Sunday Night Heat. We came back through the curtain and they’re like, ‘Uh uh, we don’t see you two together at all. No way’. And they pulled the match. It was supposed to air on Sunday Night Heat and it never aired. I was like, ‘What happened? Were we awful? What do you mean we don’t match?’ I get it now and I’m grateful… I wonder how my career would’ve been different had I actually debuted in one of those different storylines that got canned at the last minute while I was at TV.”