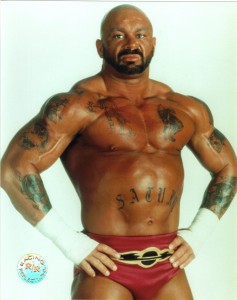 Highlights of this interview included the following:

What were his memories of Paul Heyman in ECW?

“Paul E was really great at putting us all together. He would do everything half-assed, last-minute which would make us all nuts but when it was done it was a good show all the time…Paul E would get us fired up. Paul E’s a great motivator, and he would convince us how everyone in the world was against us and it was only him on our side…Paul E would get everything out of you just by talking to you. There’s been so many times when I’ve been so mad at Paul I’m gonna kill him the second I see him. Two minutes after I see him I’m laughing and hugging him and telling him I love him. It’s unbelievable how he is. Paul E really loves wrestling, no way around it…not the wrestling business, but wrestling.”

Where did he enjoy working more, ECW or WCW?
“ECW. WCW was like being in Hell; it was the worst place in the world. Nobody was happy there. Everybody hated their job; it was horrible there…Everybody was unhappy, from the top to the bottom, and when everybody’s unhappy it’s a miserable place to be. Everybody just bitched all day. WCW made you hate wrestling; it was horrible back there…There was no boss in charge, anybody could do whatever they wanted, everybody would bitch all the time, the top guys never made shows; everybody was unhappy…The only thing that was good about that place was the money; they paid you good money.”

Perry also discussed other topics, such as:

This interview is available for listening at
http://www.iyhwrestling.com/viewnews.php?autoid=4686