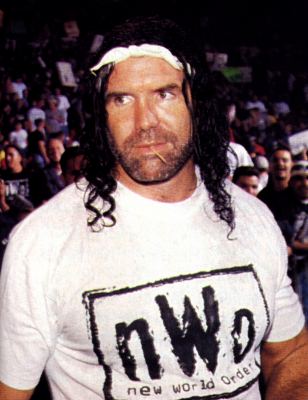 “I’ve got some dates coming up in Europe in November with Kevin Nash and Sean Waltman — doing a WolfPac signing and a question and answer (session). I think we’re doing Glasgow, Manchester, and London. Then we’re looking at some things in Japan. Now that Cody’s breaking into the wrestling business — he’s had 20 or so matches so far — we’re looking at some international bookings to get him seasoned and ready for anything that may happen for him in the U.S.”

His thoughts on steroids:

“If you’re going to try to be a pro athlete, why not use everything available to you? I’m not trying to get too involved in (the discussion), but I don’t have a problem with pro athletes being on steroids. You read about all of these baseball players getting in trouble, but I think there are a lot more important things going on in the world today than whether pro athletes use steroids to perform good. I’m not a big baseball fan, but I remember back when all those guys were hitting home runs all the time, and it was just more fun to watch. I don’t think people are getting hurt, I don’t think these guys were breaking into peoples’ houses or robbing old ladies’ purses to get the money to run out and buy steroids. When I went to WWF — it was still WWF at the time — when I was there as Razor Ramon, it was when the steroids scandal was in full swing. They were testing, and I was fully compliant with the drug policy. I went off steroids like everybody else did. And we all got smaller, but the playing field remained level. Big guys were still big, and the little guys were still little. But the reality is, when you’re on the road so many days, I don’t see how a little bit of steroids can really hurt anything. There are a lot of things that people could do that are a lot worse. That was just the time. That was then, and now is now. I’m living my life a lot differently now. And I’m happy to hear that the young cats now are not making bad choices — that’s encouraging.”

“It would be a dream come true for me but I want to clarify, it’s not up to me. If it were up to me, then I would love to have the Bobby Heenan job. I was always a big fan of Bobby Heenan. I would love to wear the headphones and a tacky sports coat, and be the heel commentator who just managed a select couple of guys. Bobby used to put down the headphones and head to the ring to manage Mr. Perfect and then Ric Flair. In my own fantasy world, created solely by me, I would love to be the Bobby Heenan broadcaster and then walk to the ring with Cody and maybe manage a sweet tag team and maybe one Diva. That would be my stable, and I’d be fine with that.”