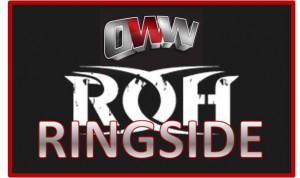 [Editor’s note – OWW would like to welcome Jose Perez.  He will be covering Ring of Honor for the website.  Look for “ROH Ringside” exclusively here at Online World of Wrestling.com.]

The opportunity has arisen to promote my favorite “current” wrestling promotion. It’s Ring of Honor (R.O.H.). Most of you have heard about it, some have watched, and I want to talk about it, on a weekly article that will be titled “ROH Ringside”. Each week, I want to discuss a certain show, storyline, match, etc. so that people can get to know what R.O.H. is all about.

However in this first article I want to talk about how I heard about, got into, and fell in love with the promotion.

I have been a professional wrestling fan since I can remember. As a kid growing up I watched typical W.W.F., however I also watched the local “Stampede Wrestling” from my hometown of Calgary, Alberta, Canada. Saturday Afternoon tradition was watching both of these federations, back to back. Except for some rare instances, I usually cheered the heels. Rick Rude, Mr. Perfect, Vader were usually on the top of my list of favorites around their time period, but I also had a liking for the Ultimate Warrior, Legion of Doom and of course, Bret Hart. I was never a Hulk-a-maniac and I couldn’t stand Shawn Michaels. My first live wrestling show was a Stampede Wrestling event, in which I saw Ron Ritchie take the North American Title from the Angel of Death, screaming with excitement at the top of my lungs. I attended many W.W.F. live events in Calgary, both as a kid and as a teenager. July 1997 would be the last W.W.F. event I would attend in Calgary, because in August of 1997 I moved to Spain. That W.W.F. Event was In Your House Canadian Stampede. It’s still considered to this day one of the best W.W.F. Pay Per Views of all time.

Thus, as I mention previously, begins my life in Spain. Spain is not a pro wrestling country. You speak with an average citizen and they only think of Tatanka, Undertaker, Ultimate Warrior and Hulk Hogan (although W.W.E. has gotten big in the past few years). Therefore when I arrived there was no pro wrestling to watch on T.V., I didn’t have Internet, and thus my pro wrestling days were dead.

However, in 1998 I installed a satellite dish at home, and low and behold I got TNT, and thus I got WCW Monday Nitro on Friday Nights. I got excited after the Monday Night Wars I left behind in Canada. So week after week I watched WCW Monday Nitro almost religiously (and eventually WCW Thunder) and it was fun. However, as we all know, around 1999/2000 the black days of WCW came by and WCW became almost unwatchable, until it eventually died.

After WCW died there was a German channel that started showing W.W.E. Smackdown! It did feed my appetite somewhat, but W.W.E. was not being much better, in my opinion, than WCW in its dying days. So pro wrestling was becoming very very stale for me, and I didn’t really care if I missed a show or not.

Despite all this, I still read the wrestling news, I liked to watch videos on wrestling, and I still loved to be involved and follow wrestling, because there’s also a certain mystique about the tradition and history of professional wrestling.

Part of this involvement was watching YouTube videos from wrestling fans. Although this was the time T.N.A. was starting to build its presence in the wrestling world, what really caught my attention was the mention of a federation called “Ring of Honor”. They mentioned that the promotion based itself on “Professional Wrestling The Sport”, had no over the top storylines, and was a true alternative to W.W.E. These characteristics captured my attention and I thought I would give it a try.

What would the first show be? Should I get a recent show? Should I look on forums and get a recommendation? Should I ask some of the YouTube wrestling fans? I decided for none of the above. I decided to watch the very first show. Therefore, I got on their site, and I bought their first show, directly from them; “Era of Honor Begins” from February 23rd, 2002.

Thus, the moment had arrived, and I popped that disc in. The intro to the DVD began, and the promos included were to hype that this was NOT Sports Entertainment, this was Pro Wrestling, how it should be. I was yelling “Hell Yeah”. Then my heart sank…. The first tag team to come out was The Christopher Street Connection; a tag team that acted as homosexuals. This was the wrestling I was dreaming about? This was the “Sport” of Professional Wrestling? I was disappointed, especially when the commentators were stating “There’s no room for these guys in R.O.H.”, until the Hit Squad came out to destroy this team. So I’m thinking W.W.E. rip off.

However, the next match starts and it featured two wrestlers which I have never of before at that time; Amazing Red and Jay Briscoe. They went straight into the match, and for the first “true” R.O.H. match of my life, I was pleasantly surprised. Jay and Red put on a great match.  It was a great way to introduce the product. Also, the middle card was not too shabby either.

Then we get to the main event. It was Christopher Daniels vs. American Dragon (Daniel Bryan for you W.W.E. fans) vs. Low Ki. I heard of these guys at that time when I watched the DVD, and heard they were the “future” of the business; however this would be the first time I would see them in action. And WOW what a match-up this was. This match was absolutely fantastic. The best three- way I have ever seen. It had action, in-ring psychology, unpredictability of deciding a winner. This match alone got me hooked on Ring of Honor, and made me decide that from that point on I would buy each and every show from there on out, one by one and in order.

This caught my attention, for several reasons. First of all, this told me that this wrestling company was going to be about the in-ring action. I was going to enjoy it; I love professional wrestling as an art-form. Second of all though, I had a funny feeling that this was going to be the prelude to put people over as heels. I would later learn during the first year of Ring of Honor, that that was exactly what the Code of Honor was meant for.