Home / WWE / Ronda Rousey and the Rock team up at WrestleMania

Ronda Rousey and the Rock team up at WrestleMania 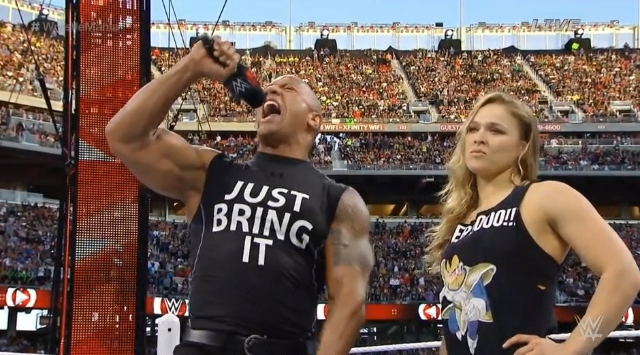 In one of the best moments of WrestleMania 31 the Rock brought UFC star Ronda Rousey into the ring to confront the Authority, Triple H and Stephanie McMahon.  Read about this historic moment here!

Lilian Garcia introduces Triple H and Stephanie McMahon, who are in the ring. She announces 76,976 people in Levi’s Stadium, a new attendance record. Stephanie goes on and turns on everyone by saying they’re all here for her and her husband. Triple H takes the mic and heels on the crowd too, saying beating Sting was like beating all 76,976 of them. He goes on about how they own all the fans, they own the Divas, they own the Superstars…The Rock’s music hits and out he comes to a huge pop.

The Rock takes his time getting to the ring and soaks it all in. Fans cheer for him. Rock hits the ring and they chant “this is awesome” now. Stephanie says she gets it, people are happy to see him but need to be quiet now. Rock can’t speak yet because everyone is going nuts. Rock says they don’t own the fans and damn sure don’t own him. Rock gets a pop for being an East Bay Boy. Rock tells them they have two choices – Triple H can go dress up like Terminator again or they can create a WrestleMania Moment right here, right now. Rock cuts a promo and is in Triple H’s face now. Triple H doesn’t back down and steps up. Triple H say they had a helluva ride and he remembers kicking Rock’s ass for most of it. Triple H says he has nothing to prove to Rock. Rock says Triple H has clearly left his balls in Stamford, CT. Rock readies for a fight as Triple H takes his jacket off. Stephanie gets in between them and says Rock just has a chip on his shoulder and plays up to the crowd to feed his ego. Stephanie says Rock knows that without the McMahons, there would be no Rock.

She brings up Rock’s father and grandfather, saying they all owe the McMahon family. Fans chant for Shane McMahon. Rock says she’s talking about the Johnsons and the McMahons but the truth is she wouldn’t be in power if it wasn’t for Vince McMahon’s Johnson. Stephanie slaps him. She asks Rock what he’s going to do, hit a woman? She yells at him that this is her house, her people. She yells at Rock to get the hell out of the ring. Rock backs away and Stephanie taunts him big time. She keeps going on and Rock stops. He walks back around the ring where UFC’s Ronda Rousey is sitting. Fans start chanting Rousey’s name. Rousey stares Stephanie down and the crowd pops. Rousey hops the barrier and Rock walks with her into the ring. A “holy shit” chant starts as the four face off. A “Ronda’s going to kill you” chant starts. Rock says he would never hit a woman but he has a very good friend who would be happy to. Stephanie says she and Ronda are friends, Rock might not know that. Stephanie says she’s a big fan and Ronda is a fan of hers. Stephanie says the Four Horsewomen were ringside for her SummerSlam match. Stephanie tells Ronda to tell everybody but she won’t. Stephanie hopes Rock didn’t feel Ronda’s head with hopes and dreams of a WrestleMania Moment. Stephanie says that’s ridiculous and won’t happen. Stephanie says in the world of MMA she would be foolish to mess with Ronda but this is the squared circle, this is her ring. Stephanie says unless Ronda is going to enjoy WrestleMania like a nice little fan, she can get the hell out. Ronda says any ring she steps into is hers. If Stephanie wants her to leave, she needs to make her.

Stephanie gets serious and tells Ronda to get the hell out of her ring… now. Ronda gets angry looking too. Rock says that look means she’s about to reach down Stephanie’s throat and play jump rope with her Fallopian tubes. Triple H laughs. He says that’s the last thing Rock is going to say about his wife. Rock hears him and agrees… Rock decks Triple H and fights him into the corner. Triple H comes out stumbling and Ronda takes him down. Stephanie tells Ronda not to touch her husband again. Stephanie gets in her face and runs her mouth. Stephanie swings but Ronda blocks her and grabs her arm. Stephanie screams and goes down. Ronda picks her back up by her arm and shoves her back to the mat. Stephanie retreats out of the ring with Triple H. Rock says that’s called being owned and that’s the biggest WrestleMania Moment of the night with The Rock and Ronda Rousey laying the SmackDown on their candy asses. Rock and Ronda stand tall as Triple H backs up the ramp with Stephanie. Rock and Triple H have words. Rock raises Ronda’s arm as the crowd pops and his music plays.