Home / Columns / AS I SEE IT: The world’s most famous Bingo Hall is back in business

AS I SEE IT: The world’s most famous Bingo Hall is back in business 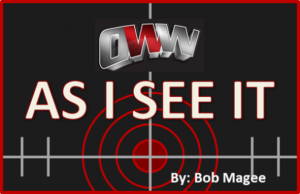 AS I SEE IT: The world’s most famous Bingo Hall is back in business
Bob Magee
Pro Wrestling: Between the Sheets
PWBTS.com

Call it Viking Hall, XPW Arena, Alhambra Arena, The Arena, Asylum Arena, or the current name, 2300 Arena…but by whatever name you call it, the ECW Arena is having its first wrestling weekend in nearly 2 1/2 years.

If you go to any of the shows this weekend, it will look much different inside than the Arena you remember. It’s bigger, it’s brighter, it’s nicer, it’s cleaner, the bathrooms work, the concessions will be expanded (and that’s the beginning of the planned updates). The classic entrance to the Arena will eventually be no more. A new entrance has been built on the Swanson Street side of the building. A new lighting system will be installed, the notorious issues with sound will be dealt with as walls and ceilings will be re-done for acoustical purposes. The 2300 Arena is expanded to cover the old Forman Mills (RIP) as well as the traditional ECW Arena space.

But changes notwithstanding, it’s still Swanson and Ritner, it’s still South Philadelphia, down the street from Tony Luke’s…and there’s wrestling there.

As said in past months in this column, it’s the intent of Roger Artigiani to bring wrestling back to the Arena, but other events as well. Previous to the Arena’s closing, MMA and boxing cards (including boxing cards televised on ESPN2, NBC Sports, and Telemundo. He wants that to return, along with bringing in other events.

For information on the new Arena, go to the new website.

Interesting note: it isn’t just the Arena that’s changed, but the neighborhood…somewhat. A new bowling alley, South Bowl, is under construction right at Swanson and Oregon (where we turned left off of Oregon to get to the Arena), and Adventurer’s Mini Golf is scheduled to open late in the spring. Swanson Street is also reported to be getting resurfaced (a pleasant change from its lunar-like driving surface of the past).

I have to note that the lineup for Saturday and Sunday has become somewhat fluid, to say the least over the weekend, so to be updated on the lineup throughout the week, please go to Extremerising.com or their Facebook.

THE Sandman returns to Extreme Rising and the former ECW Arena with his trademark cigarettes, beer, and his trusted cane.

World Title
Stevie Richards defends against a wrestler to be named

BLK OUT vs. Da Hit Squad with Pitbull Gary Wolf

ALL tickets (besides Golden Circle) are ONLY $20!!!

Steve Corino vs. “The Dark One” Devon Storm

The first ever “EXTREME RIOT” match. More details on that match, talent lineup, matches and more to be unveiled in time.

More matches to be announced.

Finally MaskedMania will be taking place on Sunday, April 27th, at the 2300 (ECW) Arena in South Philadelphia at 5 PM EDT. For more on the show you can visit MaskedMania web site where you can find ticket and iPPV info. The show will be airing on iPPV for only $9.95 via Highspots. You can watch it live or on VOD which will start 30 minutes after the show ends and will also give you access to rewatch the show for 30 days after the event. Commentary for the event on iPPV will be in English handled by Leonard F. Chikarason and Joe Dombrowski.