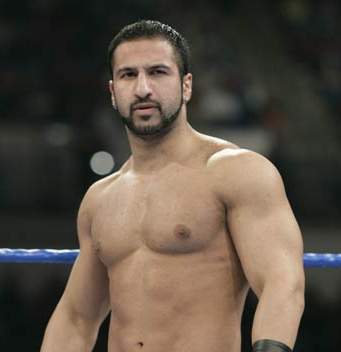 Shawn mentioned he’s now living in Houston, after moving from Minneapolis, Minnesota where Daivari says he was born & raised. They then discussed the weather in Minnesota & how it effected Shawn Daivari’s travel schedule.

Doc pointed out that Shawn has wrestled for TNA before & Daivari noted that he has worked some televised matches for the promotion.

Shawn Daivari continued by saying in 2002/2003 he was starting to get noticed and that spoke about being offered a WWE contract the same week he was booked for Japan on his first tour, both of which occured in the summer of 2004.

Adam asked if Shawn worked for ROH. Daivari pointed out he has wrestled for Ring of Honor, noting he had five and six matches for them & his last independent show he appeared on was from ROH.

Doc asked about Daivari’s & Muhammad Hassan’s hiatus from WWE in 2005, he stated this maybe because of UPN/Viacom but he doesn’t really know the reason why. Doc asked about his reactions to the storyline of managing Muhammad Hassan. Shawn said he was cool with it & highlights he is a legitimate Arab-American and spoke about how people reacted to him after 9/11 where he felt treated differently like a minority and that he used the reactions he received helped play his character better.

Shawn Daivari says he didn’t think the angle with Muhammad Hassan was distasteful & they didn’t mess with the soliders at ringside at WWE shows. He highlighted that it was more about ‘strong political satire’ and noted it was better writing on behalf of the creative team. Daivari highlighted he has been threatened over his character, but the same fans want a picture & autograph and noted the fans enjoy being part of the show.

The ‘Wrestling Weekly’ listeners in the live chat room are then given the opportunity to ask Shawn questions.

The first question is about Muhammad Hassan and whether WWE should re-sign him or be signed by TNA. Shawn Daivari stated that Hassan is now out in Hollywood and hasn’t done any autograph signing and independents & noted Muhammad is seemingly done with wrestling.
Shawn is asked about whether he will join TNA’s X-Division and he spoke about having a ninety day no-compete clause with WWE and what day it expires. Daivari then emphasised he would like to wrestle for TNA and for any other promotions in Mexico, Japan.

Adam asked about Ring of Honor now having pay-per-view and Shawn said ROH’s is now like ‘the biggest independent in the world’.

Shawn is asked whether TNA is complicated to keep up with or not. Daivari agreed that sometimes is can be, and highlighted that it happens in TNA & WWE and also happened with WCW too. “Being complicated can lose your audience.” He noted. “TNA has to appeal to that channel surfer, they have their core fans…they just need to grab everybody else”.

Adam Martin asked Daivari about the ratings and how important were they to him wrestling for WWE. Shawn spoke about ratings and that now wrestling is driven by pay-per-view and the free shows are more like commercials. He then talked about Booker T going to TNA and how it could increase their ratings & how Booker could ‘bring the product up’ with his wrestling knowledge and noted that they worked together while at WWE.

Shawn is then asked about the reason behind his release. Daivari pointed out he quit WWE on October 8th after six months of contract negotiations with WWE, which would have ran to 2011. When they couldn’t settle on a creative resolution, Shawn Daivari stated he went to Stephanie & Vince McMahon and let them know he wouldn’t be resigning and asked for his release early, as he was still contractually obligated to WWE. Daivari emphasised WWE were cool about him leaving and thanked him for his work there.

Shawn has an official website at www.shawndaivari.com and he can be booked via his agent at [email protected] for wrestling seminars, independent shows and autograph signings.

Doc then gives Shawn his best wishes and thanks him for being a guest. Next week’s guest will be JJ Dillon, talking about his new ‘Guest Booker’ DVD with Kayfabe Commentaries.