Home / Columns / Squandering A Mega Star: The WWE Blew It With Ryback

Squandering A Mega Star: The WWE Blew It With Ryback 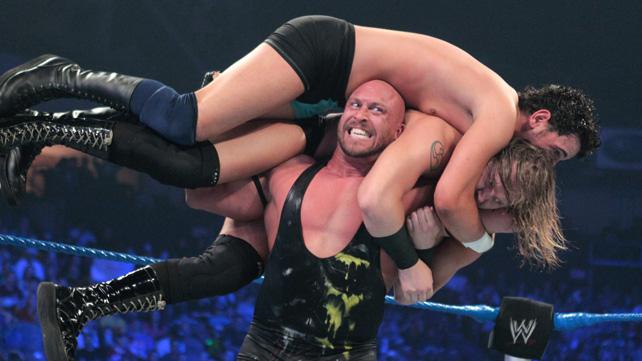 Ryback was revealed to be taking time off this week, with possible reasons spanning from injury to a character revamp. 411’s Greg DeMarco sees it as an opportunity to right a wrong: squandering the mega-star that he could have been!
John Cena‘s return to Raw from a one week hiatus brought about more complaints of him being stale (those complaints are stale), being booked too strong and hurting Bray Wyatt‘s credibility. It also brought out more calls for the face of the company to do an about-face…and turn heel. And while I agree that John Cena would be an amazing heel (and Cena himself seems to agree that he has a heel run in him), there is no one in position to assume the mantle of face of the company. No one to grant a record breaking number of wishes. No one to sell truckloads of merchandise. No hero for the kids to worship. No…well, no John Cena!

The tragedy in all of this is that the WWE had the next John Cena. A man who was so insanely over he could have realistically defeated CM Punk for the WWE Championship—prematurely ending the Straight Edge Superstar’s monumental title reign—and no one would have doubted the decision. A man who had boatloads of natural charisma, an uncanny connection with the WWE Universe and marketability that was second only to John Cena himself.

Oh, and did I mention the catchphrase? Yeah, he had a great catchphrase…

Make no mistake about it, “Feed Me More” was one of the most over catchphrases of the past ten years. That does make a difference in the success of a superstar. Ryback was over, and ready to have the rocket strapped to his back.

When the WWE needed someone to fill in for John Cena against CM Punk at the above referenced Hell In A Cell, that man became Ryback. Up to that point, Ryback largely won short, exhibition style matches with no intention other than to get the monstrous Ryback over with the largest fan base possible. In fact, he was so over that John Cena is a documented fan.

Read more at http://www.411mania.com/wrestling/columns/333430#i0rSWwWwkY9FZ71q.99
Related ItemsRybackwwe
← Previous Story Did the WWE drop the ball at Battleground?
Next Story → The History of the National Wrestling Alliance