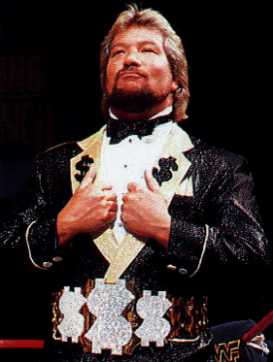 “The Million Dollar Man” Ted DiBiase Discusses His Induction Into The WWE Hall Of Fame, Strong Words For The Ultimate Warrior (And Why He Is Glad The Warrior Was Not Inducted Into The WWE HOF & Not A Part Of The WrestleMania XXVI Weekend), His Response To The Critics Who Panned This Year’s Class For Not Having “Bigger Names,” What He Sees For His Son (Ted Jr.) On RAW/The Creative Direction Of His Son’s Character, & If A Full-Time Return To The WWE For “The Million Dollar Man” Could Be In The Works After Last Monday Night’s Legends Lumberjack Match

Ted joined The Big Mosh, Blade, & “The Chairman Of The Board” Todd Vincent for his return to “Your Home Of Wrestling Radio” (for his first interview/public comments since his induction into the WWE Hall Of Fame), which is now available in Windows Streaming Media or via Monday Night Mayhem’s official Podcast on ITunes:

Interview highlights courtesy of The Mayhem’s official correspondent, Paterson From New Jersey:
His thoughts on the WWE’s “Class Of 2010” & the critics who panned this year’s WWE Hall Of Fame inductees for not having “bigger names” announced (including the previously speculated names of The Ultimate Warrior & The Honky Tonk Man): “The people that went in I thought were very deserving. If you’re a follower of just the WWE, the WWE Hall Of Fame is no longer simply just the WWE. I believe the company has realized that there are so many people that contributed to this industry that ultimately in one way or another, contributed to the WWE. Gorgeous George is one of the most famous names ever in wrestling. You talk to anybody that never followed wrestling, everybody heard of Gorgeous George. (Antonio) Inoki obviously, Wendi Richter was a gal who was there at the beginning of the whole ‘Rock ‘n’ Wrestling’ thing.”

Why Ted was glad The Ultimate Warrior was not inducted into the WWE Hall Of Fame this year & not a part of the WrestleMania XXVI weekend in Phoenix: I’m glad he wasn’t there. I’m glad he wasn’t there because he’s somebody I don’t particularly care for, and quite frankly, he was somebody who got a big push. He’s one of those guys that has never really appreciated what was done for him, and all you have to do is watch the DVD. There’s a lot of guys that did well in the industry that may have been lacking in some areas. But here’s a guy who the only reason he ever had a great match, every great match he had was directly depended upon who he was wrestling. And if the guy across the ring from him couldn’t lead him around by the nose, he couldn’t have a good match. So the fact that he wasn’t called on doesn’t bother me at all. I thought that since he lived out in that area, I thought that could have happened, and quite honestly, it would have been a very tense backstage environment if he & I were together. He’s one of those guys who has been given so much in terms of an opportunity in our industry, who even to this day doesn’t appreciate it, and I don’t know for the life of me who he thinks he is.”

What are the major differences between the wrestling industry when Ted was in his prime vs. now/World Wrestling Entertainment today: “In terms of the industry as a whole & in terms of what the WWE has done to make it better for the talent, a four-day work week, which is something we never knew. I always compare it to the old NFL to the new NFL. Every company has it’s growing pains and had to grow to a place where they are able to do these things. Again compensation across the board…oh my gosh! My son is probably going to make this year…I would guess if he doesn’t do what I did in my best year, I’ll be surprised. Compensation is so much more. Not to mention where they are going. When I did international interviews for the Hall Of Fame, I did interviews with guys from Poland, China. These guys are going to places I wouldn’t dream about going.”

What it meant to him for his sons (Ted & Brett) inducting him into the WWE Hall Of Fame: “To be inducted into the Hall Of Fame, any Hall Of Fame, it’s being honored by your peers. I know some go it’s a work, but it’s not. Arn (Anderson) & Ricky (Steamboat) and all the guys I talked to were very congratulatory & everything. It was a special moment, because you are being recognized by those who you have been in the business with, and it was extremely special to be inducted by my boys. The legacy of just my family, and I said it the other night, I wish my dad was here to see it.”

What he believes is in store for his son in the WWE post-WrestleMania & if we will see a full-time/more-defined role for “The Million Dollar Man” alongside his son or separately: “I have no idea guys. Whenever the company calls on me, and they want me to make a cameo appearance, and if they would like me to do something more on a regular basis, I’ll cross that bridge when I get to it. As far as my son, I think now & in the coming year, this is time when you will see him branch out more on his own. I think when you look at the roster & the guys that are there, it’s time. It’s time for them to start stepping up a notch, and we’ll just see how it goes.”

More is contained in this exclusive interview with the newest inductee into the WWE Hall Of Fame, including Ted’s candid thoughts & comments on why Virgil was not at the HOF Ceremonies at The Dodge Theater, if a future Hall Of Fame spot is deserved for The Honky Tonk Man, even more differences in wrestling today from his glory days, & being an integral part of this year’s WrestleMania weekend, along with next year’s in Atlanta…several months early! You can meet “The Million Dollar Man” live & in person as part of the Promolast Atlanta Reunion Pro Wrestling Fanfest, Friday June 4th & Saturday June 5th at The Renaissance Concourse Hotel in Atlanta, GA. Log onto http://ww.PromolastEvents.com for ticket information & the entire guest lineup (featuring: Howard Finkel, Booker T, Diamond Dallas Page, “The Total Package” Lex Luger, Ron Simmons, Raven, & many more).

“Your Home Of Wrestling Radio” is officially presented by ReelWrestling.com (located at http://www.ReelWrestling.com), where your favorite Superstars are just one click away! The award-winning Monday Night Mayhem (voted on by you, the fans as the “Show Of The Year” in the 2009 & 2010 Wrestling Radio Awards) is also sponsored by: Sizzlin’ Sauces (the official hot sauce of The Mayhem: http://www.SizzlinSauces.com), Ringside Digest (the official news source of The Mayhem: http://www.RingsideDigest.com), TicketRelief.com (the official online traffic school of The Mayhem; register today for your simple & hassle-free defensive driving course: http://www.TicketRelief.com), B. Brown Video (where you can relive the moments & memories of professional wrestling’s rare & vintage moments: http://www.BBrownVideo.com), & Kayfabe Commentaries (the home of the all-new “YouShoot: Jim Cornette” DVD: http://www.KayfabeCommentaries.com).