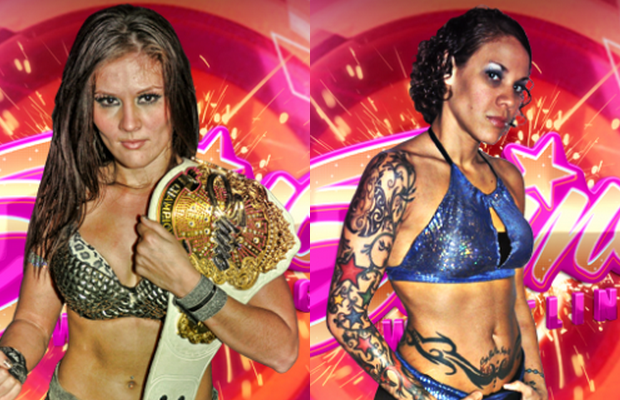 The first of those matches announced will be for the SHINE Championship. Due to Rain‘s retirement after SHINE 16, she will obviously not be first in-line for a rematch. SHINE officials have decided that new champion Ivelisse Velez will face none other than NCW: Femmes Fatales Champion Mercedes Martinez. Will Mercedes leave SHINE 17 the holder of two championships?

Elsewhere on the card, Angelina Love will face the Valkyrie stable’s newest member, Serena Deeb, following events from SHINE 16. Serena impressed in her debut at the last show with a win over a departing Santana Garrett, so can Serena make it 2-0 in SHINE?

In addition to the singles matches, all eight teams have been announced for the SHINE Tag Team Championship tournament. The participating teams are: Christina Von Eerie and MsChif – MsEERIE, Kimber Lee and Cherry Bomb – Kimber Bomb, Heidi Lovelace and Solo Darling (with Daffney) – The Buddy System, Malia Hosaka and Brandi Wine, Mia Yim and Leva Bates, Tracy Taylor and Su Yung – The West Coast Connection, Sassy Stephie and Jessie Belle Smothers (with Nevaeh) – The S-N-S Express and Allysin Kay and Taylor Made – Made in Sin.