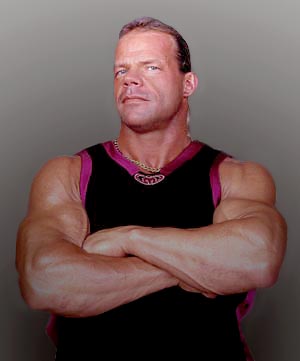 “The Total Package” Lex Luger recently joined Steve and the Scum on WGD Weekly, discussing all points from his storied career in professional wrestling. During this near 90 minute interview with WGD Weekly, Lex touched on all the most controversial spots in his career.

Some highlights of the show include Luger discussing:

The Miss Elizabeth tragedy: “…It was a very dark, sad time in my personal life…I’ve made a lot of bad choices outside of the ring over the years that led to me giving up my family, my beautiful wife and two children…I developed a double life and there was a lot of collateral damage from that to my friends, my family and those closest to me including Miss Elizabeth. She always will be the first lady of wrestling…it was a real tragedy, I was living a lifestyle back then, a lot of drugs, alcohol, I call it the life of folly in my book, it led to a lot of tragic things and that was the biggest tragedy you could ever think of to have a close friend like Elizabeth as a result of it. People say well Lex, you didn’t make her drink or shove pills down her throat, but I was a very big influence on her life at the time and I was doing that and she wanted to do what I did, so if you talk about regrets in the past guys, we can’t erase the past and we have got to take responsibility and I take a lot of responsibility for that tragic event and what happened…”

His thoughts on first finding out about Vince McMahon buying WCW and being on the last Nitro: “…I was happy for Vince because I knew, man, he had won, that was a genuine moment for him, I was like, yeah, buddy, everybody had you counted out there when we were beating you for “x” amount of weeks straight, I was happy for him…”

On the night before WrestleMania 10, not becoming WWF Champion, and internet rumors: “…contrary to what is said, Vince never promised me the belt…he never made me any promises at WrestleMania between Bret, or I, or Yoko…nor did I expect him to make any, why would he, I was thrilled to be a part of the main event of WrestleMania…it’s funny I was talking to a guy in an interview recently and a guy said, ‘It was on your Wikipedia that you were drunk the night before at a bar at WrestleMania 10 and you were supposed to win the belt and Vince got mad at you,’ I wasn’t even anywhere near New York. I was with my wife and two kids in Hartford, Connecticut, staying with friends the night before WrestleMania…I did a lot of stupid stuff back then, but that wasn’t one of them…rumor becomes fact sometimes, I laughed at that for years, of all the stupid dumb stuff I did outside of the ring, that was one that I didn’t do…I always found that
humorous, crazy how rumors can start…Who came up with that one?…”

On the Vince Russo coming in as head writer in WCW: “…I think that Russo and Ferrara did their best to create a young, fresh group of guys, kind of doing an invasion like the now did and really on paper, a pretty good idea. They had a great reputation coming from the WWF for being very creative, really when we found ourselves slipping, consensus wise most of the guys were pretty excited that they were coming in and I think they gave it their very best effort, and the young guys came in and gave it their best effort, I think part of the problem was for when the young guys, when they came in and were beating these legendary guys like Hogan…in the middle of the ring…I think the fans as much as they love seeing young talent emerge, I think it was almost like a little bit too much too soon in my opinion and the fans didn’t really buy into it like they had hoped. It was a good idea but the fans didn’t quite buy into it…they did their best, but things just didn’t work out the way they hoped, it wasn’t from a lack of effort on the new guys part, the writers or the young wrestlers, it just didn’t get over the way they had hoped…but I didn’t think it was a bad idea…”

On Ric Flair and being a Horseman: “…well, Ric lived his persona both in the ring and out of the ring, I found that out right away, I feel like for about three years there hanging out with the Horseman, I feel like I didn’t sleep for almost three years…Ric could stay up all night…then he go to the gym and work out with me, then he go and wrestle and hour broadway, I don’t know how he did it…Ric will always tell you image is everything, he always had a limo waiting for us, we flew usually private or if we flew commercial, first class, stay at really nice hotels…Ric was everything he said he was both in and out of the ring, that’s for sure…”

On Flair leaving WCW in 1991 with the title before their scheduled cage match and showing on WWE TV with it: “…I was scheduled to wrestle Ric in the cage and I was scheduled to win the title that night…I wasn’t told a lot, but they told me, we’re putting you in the cage with Ric and you’re winning the world title…as far as what happened after that, it was political stuff behind the scenes that I was not privy to, I heard that Ric was trying to negotiate a new contract, and I wanted the best for Ric, so when Ric ended up on television with the belt in the competing organization, I never had any hard feelings about that because I knew Ric had worked so hard and had such an incredible career, he was trying to do what was best for him and his family, from a business sense, I never took it personally…I was disappointed I didn’t get to wrestle Ric in the cage to win the world title, but I wasn’t upset with Ric that he went and did what he had to do and what he thought was best business wise for Ric Flair…WCW at the time, they were negotiating with Ric almost right up until the day of the match …to still come in and do the match, it just fell apart at the last minute…Ric almost was WCW, so for Ric to leave was a huge void and vacuum that myself and nobody could possibly even entertain the thought of replacing…they didn’t even have a belt ready yet…I think  a lot of the guys were disappointed that Ric wasn’t there, but the show must go on…”

In addition to these comments, Luger also touches on his football days and playing with Ron Simmons in the USFL, his start in wrestling and working with Hiro Matsuda, the infamous steel cage incident with Bruiser Brody, joining Crockett Promotions and working with Tully, Arn, J.J., and Flair, the original War Games match, Barry Windham, Ricky Steamboat, the WBF, the move to WWF, the “Narcissist”, working with Bobby Heenan, his longtime friendship with Sting, the Lex Express and slamming Yokozuna, showing up at the first Nitro, winning the World Title from Hogan on Nitro, the Monday Night Wars, his many personal demons, and much, much more…