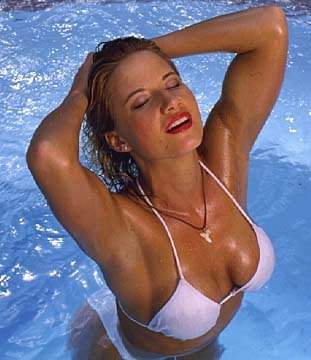 Women Superstars Uncensored (WSU), the only All-Female promotion on the northeast, returns on 9/22 with another special double DVD taping. The event will mark WSU’s 5th & 6th shows! Already scheduled to appear are big names such as Tammy “Sunny” Sytch, “The First Lady of Wrestling” Missy Hyatt, ECW Original Angel Orsini (The Prodigette) & many more! Here are the announced matches for the first taping:

This match has been brewing to happen again in WSU ever since these two first collided on 3/3! Alicia, the defending WSU womens champion, spoiled the in-ring return of Becky Bayless on 3/3, defeating her soundly after seeing her own blood. The first match between these two saw Alicia bleed profusely, however the sight of her own blood set Alicia off and Alicia went on to win the match.

Becky, knowing she wouldn’t be ready to beat Alicia, took herself off of WSU’s 5/5 show, and sent in long-time friend, Luna Vachon, to teach the cocky Alicia a lesson. However, that planned backfired on Becky, as Alicia was able to beat Luna in the middle of the ring cleanly on 5/5.

Becky & Alicia would then meet again, this time in managerial roles, on WSU’s 5/18 event. After brawling a bit, the two had to be pulled apart. Becky showed fire like never before, and for WSU fans, it looks like there is a new Becky in town. Even Alicia, who underestimated Becky in the past, looked unsure of herself.

Becky was supposed to take on Alicia on 7/14, but due to severe illness, couldn’t make the event. Alicia accused Becky Bayless of ducking her. Becky has responded by demanding a NO-DQ match against Alicia on 9/22, for the WSU Women’s Championship!

Alicia has been very busy in WSU, as while Becky was recuperating on 7/14, Alicia became the first ever WSU Womens Champion, defeating Nikki Roxx, Amy Lee & Luna Vachon in a Fatal-Four Way that went inside & outside & all over the building. Since winning the championship, Alicia, who is very arrogant but talented, has been a fighting champion. However, Alicia recentlyÂ was tripped up by Alexa Thatcher, who was able to upseat Alicia for the WSU Womens Title on 8/17. It would be a short reign for Alicia, as Alicia would win back the championship, after a henious pre-match attack, the next day on 8/18.

Alicia, who is overlooking Becky Bayless, calling Becky “a fat porker bitch”, said her title is more important than anything involving Becky Bayless. Alicia currently has title defenses scheduled against Talia (9/7 for PWS) & DellaMorte (9/15 WUW) and might have too much on her plate. Becky is training extra hard, preparing herself for the biggest match of her career.

If Alicia is still the champion on 9/22, this will be a title match. To Becky, the championship would look great around her waist and boost up her credibility on the womens wrestling scene, but to Becky beating Alicia at this point means more to her than the gold. However, for Alicia, it is all about the WSU Womens Championship and remaining champion. Should Alicia have the belt, she will lose a champions advantage, as Alicia has accepted the NO-DQ stipulation.

It is no secret that Alicia hates Becky and Becky hates Alicia and on 9/22 it all comes to a head. The Queen of NJ meets her perhaps her toughest challenge yet against the Pride of NY. Alicia vs Becky Bayless will be your main event on 9/22.

All-wrestling stand-out Cindy Rogers debuts for WSU on 9/22. Cindy won’t have an easy debut, as she takes on now a former WSU Womens Champion, Alexa Thatcher. Alexa, who’s now had taste of WSU gold, wants nothing more than to re-establish herself as the top wrestler in the company. Alexa even waived off her guaranteed Title Rematch for 9/22, opting to gain more experience and more knowledge in order to be 100% prepared once she challenges for the WSU title again.

Alexa Thatcher was thrilled when she heard Cindy Rogers was debuting in WSU and immediately asked WSU for a chance to prove herself against the wrestling machine, Cindy Rogers. Cindy Rogers, knowing a win over a former WSU womens champion would quickly skyrocket her in the rankings accepted in pleasure.

On 9/22, we will have a classic technical wrestling match as one of the best in-ring wrestlers on the circuit, Cindy Rogers, goes one-on-one with one of the hottest prospects today, Alexa Thatcher. Will Cindy Rogers shoot to the top of WSU on 9/22?

Will Alexa show that she’s not a fluke and be able to pick up a huge win? We’ll find out on 9/22.

Alere Little Feather, who’s been on a losing streak in WSU, after losing to Amy Lee & Alexa Thatcher, looks to right the ship on 9/22, taking on newcomer Roxxie Cotton. Roxxie Cotton, known for fun-loving ways, looks to start off her WSU career with a win. Perhaps the odds are in her favor, as it is suggested that Alere Little Feather has been in a downward spiral since going 0-2 on 7/14.

When WSU caught up with Alere, Alere told WSUWrestling.com that she has been seeking guidance from her fellow Native Americans. Alere went to one of her Native American Elders, who happens to be a Tribe Leader and was told to look for answers in her heritage. Alere has done alot of soul searching and has re-embraced her roots. Alere has also found an old Indian recipe. This old recipe is a powerful potion, which has been past down for the last several centuries in the Native American community. This potion, when drank, gives a person great might and will, and even a stronger drive than imagined. Will Roxxie be able to overcome what seems to be a new Alere Little Feather? Will Alere continue her losing streak? All the questions to be answered on 9/22.

One half of Satan’s Sisters, Amy Lee, has put out an open challenge to anyone who has “the c*&$” to step up to her. Amy Lee, who ran Kayla Sparks, Miss Deville & Liz Savage out of WSU, after giving them the ass kicking of a lifetime with her Satan Sister running mate Luna Vachon, has made it clear that she will take on anyone, anywhere, anytime in WSU. Who will be brave or perhaps stupid enough to take on Amy Lee on 9/22? Amy Lee, who’s never lost a singles match in WSU, looks to be the person to beat if you want to make a name for yourself. However, that is ALOT easier said than done. Amy Lee, in a profanity laced tirade told WSU she doesn’t care who signs on to wrestle her and there’s a 99% chance that whoever steps in the ring with her, will join Kayla, Deville and Savage on the “Ran-Out-Of-WSU-By-Amy-Lee” list.

Jana of the Soul Sisters vs Taylor Nicole

On 7/14, The Soul Sisters, one of the hottest & most charismatic tag teams in all of wrestling today, continued dancing their way into the fans hearts and shaking their booties into victory. The Soul Sisters of Latasha & Jana defeated DellaMorte &Â  Taylor Nicole on 7/14. Della Morte & Nicole are furious about losing to such a free-willed team, that they’ve challenged the Soul Sisters to one-on-one matches, in hopes of trying to take the Soul Sisters out of their tag team element. Will this strategy work? We’ll find out when Jana battles Taylor Nicole, one-on-one, on 9/22.

“The First Lady of Wrestling” and perhaps the biggest gossiper in WSU, Missy Hyatt will be on hand with a special edition of Missy’s Manor. Missy has promised WSUWrestling.com that this will be the most explosive and exciting edition of Missy’s Manor yet, as Missy has lined up a ton of guests for this event! Already invited to be on the Manor are Amy Lee, Mercedes Martinez & the first ever “diva” in wrestling, Tammy “Sunny” Sytch!

Missy Hyatt, who has personally endorsed Amy Lee & Luna Vachon on 7/14 has invited Amy Lee on her show to talk about what Amy did to Kayla Sparks, Miss Deville & Liz Savage. Whenever there is a microphone in front of Amy Lee, Amy Lee always makes herÂ  opinions known. This should be explosive.

Also scheduled to appear on Missy’s Manor is the returning Mercedes Martinez. Martinez, coming off shoulder surgery, will tell everyone in WSU her plans and her goals during this special edition of Missy’s Manor.

If that wasn’t enough, Tammy “Sunny” Sytch will be Missy’s featured guest. There has been one wrestler who’s caught Tammy’s eye, and Tammy plans on confronting this person on 9/22! This promises to be the best edition of Missy’s Manor yet!

ECW Original, The Prodigette, now going by the name of Angel Orsini will be in the house on 9/22. Angel has been scouting WSU by watching WSU DVDs and plans to make her name known to everyone in WSU on 9/22. Who will Angel take on first in WSU? Does Angel have any allies or does she have any enemies? Everything will be made clear, as Angel will be wrestling for WSU on 9/22.

Talia Madison is expected to be in the house on 9/22. However, someone very close to Talia, in Talia’s personal life, is expected to have a baby on or around 9/22. Talia has told WSU that she might not be able to make the event due to this pregnancy. If Talia is able to make the show, Talia will be there on 9/22. If Talia has to be at the hospital for morale support, then she will not be on the event. Talia originally wasn’t going to take the 9/22 date, but WSU has given her an open door, where if she can make it with last minute notice, she will be there. Fans looking to see Talia in 100% confirmed WSU action, can check her out on DVD through the DOIVideo.com store and/or check Talia challenge Alicia for the WSU title on 9/7 for the PWS promotion in Garfield, NJ.

All this and much more takes place on 9/22. Others scheduled to appear are Foxxy Foxxy, Stacy Hunter, DellaMorte, Destiny & much much more! Keep checking WSUWrestling.com for all the latest updates. You can also purchase WSU’s first four shows on DVD, plus the “Missing Matches” DVD, through WSUWrestling.com! All DVD’s are discounted and will play on any DVD player. The first four WSU DVD’s, “Destiny”, “Bad Luna Risin”, “WSU Title Tournament” & “Satans Sisters Revenge” are usually on sale for an even more discounted price at DOIVideo.com

All tickets for both shows are only $5. That’s basically $2.50 a show! In between shows, WSU will be hosting a special meet & greet session, where fans can get autographs and pictures of their favorite female WSU personalities.

Lastly, WSU is in the works to announce a major name, who will be added to the 9/22 event. Nothing is official yet, but WSU hopes to make this announcement on 9/9. This major name just adds more value to what already is a cheap ticket at only $5!

To purchase tickets in advance, please Paypal $5 to [email protected]