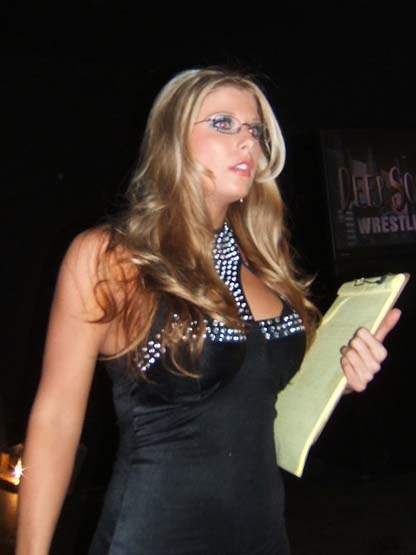 Krissy Vaine, who just debuted on the September 28 edition of WWE Friday Night Smackdown in an angle where she attacked Torrie Wilson, has already left World Wrestling Entertainment. Vaine and her boyfriend/wrestler Ryan O’Reilly, (who was being featured on WWE Heat), both requested their releases.

On Tuesday, October 16th, Krissy Vaine and Ryan O’Reilly will simutaneously hold their first audio interviews about this situation on Wrestling Weekly. They will join hosts Doc Young and Les Thatcher to explain why they asked for their releases, what plans WWE had for them, what their next plans are, and answer YOUR questions!

Also, former WWE, WCW and most recently TNA star Jerry Lynn will join the program to discuss his time with TNA, what’s he been up to since his release, and will also answer questions from our live chat room!
All this, plus Doc and Les give the weekly rundown of the weeks news and views of the wrestling industry!

Join us in the chat room live by clicking on the chat link, to interact with other listeners during the program and sumbit questions for the hosts to ask our guests on the air!

The show starts Tuesday at 8pm Eastern, don’t miss this one!