WWE.com presents: “The True Story of the Curtain Call” 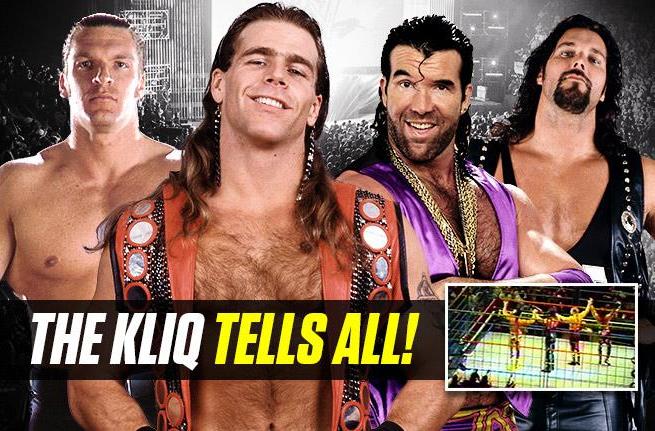 The footage makes you appreciate just how far technology has come since May 19, 1996. Had it happened today, a hundred iPhones would have captured the moment in high-definition from every conceivable angle. Instead, it exists as a single shaky video clip shot from a handheld camcorder somewhere in the mezzanines of Madison Square Garden.

It shows four men in a WWE ring surrounded by a blue steel cage. The quality is sketchy and the colors bleed, but the figures of Shawn Michaels, Scott Hall, Kevin Nash and Triple H — enemies in the ring, but 4/5ths of the backstage collective known as The Kliq (along with Sean Waltman) off-screen — are somehow unmistakable. One day later, Hall and Nash will exit WWE and head to WCW where they will start The Monday Night War as generals in The New World Order. But, tonight, they celebrate in front of an appreciative crowd as longtime friends in an act that is both a touching show of camaraderie and, in the eyes of many traditionalists, an unforgiveable insult to sports-entertainment convention.

Check out backstage photos of The Kliq

Eighteen years later, their celebration is remembered as “The Curtain Call” (or, in some circles, “The MSG Incident”) and its impact has yet to be forgotten. A few hours before Scott Hall was inducted into the WWE Hall of Fame, WWE.com sat down with most of The Kliq (The King of Kings — once the group’s junior member — was busy running an empire) to talk about the most controversial night in the controversial history of their controversial alliance.

This is the story behind The Curtain Call.

WWE.COM: Did you guys plan The Curtain Call ahead of time or did it just kind of happen that night?

KEVIN NASH: This may be the last time we’re in a Lumina van! We should really drink tonight.

MICHAELS: Then, that night, as best as I can recall, it was Hunter coming up and going, “Hey, are we doing that thing we talked about?” I don’t think anybody remembered it.

NASH: I walked in and talked to Vince and Pat [Patterson]! You [points to Michaels] were with me and he said it was fine and we were supposed to go to [New York City steakhouse] Smith & Wollensky afterwards. And it just turned into a thing …

WWE.COM: Before we get into the fallout, let’s talk about the incident itself. What do you remember about that moment at the end of the night?

SCOTT HALL: I remember standing in the ring and we’re all there together. It was unheard of, but the people appreciated it. I remember looking at Kev, we’re all hugging and I remember thinking we all made it.

NASH: I remember — and I think we may have even said it in the ring that night — that we weren’t disbanding The Kliq.

MICHAELS: We were taking over the business.

NASH: We’re going to go down south and take over Ford Motor Company. You guys run GM and we’ll run the automobile industry.