Home / WWE / WWE fans gets a taste of WrestleMania

WWE fans gets a taste of WrestleMania 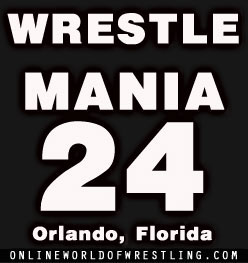 WHAT: WWE fans can get ready for the electricity and excitement of WrestleMania XXIV at Universal Orlando Resort. WWE’s Wrestlemania Fan Axxess Tour is making a stop at the Universal Studios Florida theme park, giving fans the opportunity to watch, attend and experience WWE like never before. Activities include autograph sessions with WWE Superstars, a tournament featuring the popular video game Smackdown vs. Raw 2008, trivia challenges and the opportunity to view exclusive WWE Superstar videos and memorabilia. Guests will also have the opportunity to create their own WrestleMania XXIV photo moment, take home a DVD of their own ring entrance with music and props and much more.

Universal Orlando Resort is home to two distinct theme parks, Universal Studios Florida and Universal’s Islands of Adventure. Universal Studios Florida is a motion picture and television theme park featuring attractions such as Shrek 4-D and Revenge of the Mummy – The Ride. Universal’s Islands of Adventure is home to some of the most thrilling and technologically-advanced attractions ever made, including The Amazing Adventures of Spider-Man and The Incredible Hulk Coaster. The resort also includes an entertainment complex, three on-site hotels and the widely-popular Blue Man Group show.