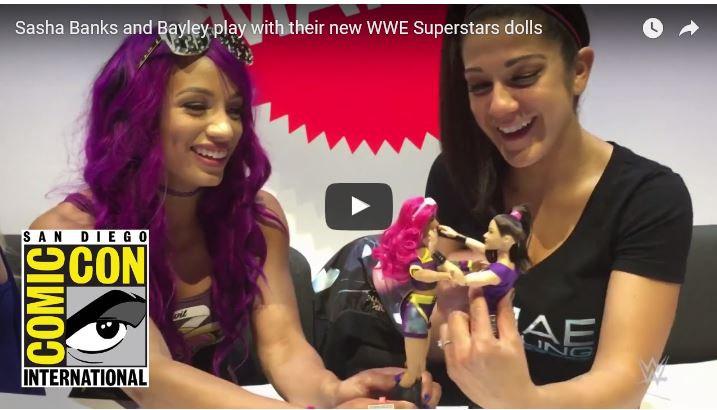 Here is the press release:

EL SEGUNDO, Calif., and STAMFORD, Conn., July 20, 2017 – Mattel and WWE are launching a girls’ product line that features the first-ever fashion dolls of Nikki and Brie Bella, Sasha Banks, Natalya, Charlotte Flair, Becky Lynch, Alicia Fox and Eva Marie, to leverage the popularity of WWE’s female Superstars and give its sizable girl fan base a new way to connect with their favorite brands.

The new WWE Superstars product line, which was revealed today at San Diego Comic-Con, offers fans an original way to play and includes the following:

Role Play items that include a WWE Women’s Championship title belt with authentic styling and sleek metallic medallions, in addition to fun accessories like a Bayley-inspired headband and Sasha Bank’s “Legit Boss” rings.

Action figures that have deluxe articulation and bold ring looks that include the Superstar’s iconic accessories.

This is the first time female WWE Superstars will have a fashion doll and role-playing line, in addition to the action figures inspired by their in-ring characters. The dolls will be available for preorder online only at Toysrus.com beginning Monday, July 24, and exclusively at Toys“R”Us® stores nationwide and Toysrus.com this September.

Read more at this link.