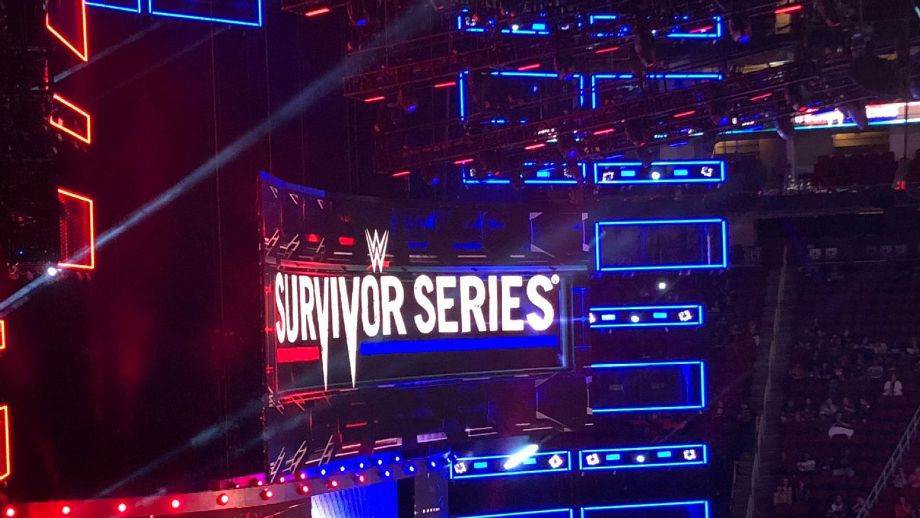 Raw vs. SmackDown. Champions against champions. Survivor Series 2017, emanating live from the Toyota Center in Houston, is largely about brand bragging rights. The stakes are high in the men’s five-on-five Survivor Series match, with general manager Kurt Angle‘s job hanging in the balance, but more so than anything else, Survivor Series will feature several dream matches that most fans never would have expected to see.

Tim Fiorvanti is live in Houston covering the action, along with additional coverage from Matt Wilansky and match ratings from ESPN Stats & Information’s Sean Coyle.

After inserting himself into the match just a few days before Survivor Series, it was clear Triple H would play a key role in the main event. Courtesy WWE

From the moment Triple H inserted himself into the men’s five-on-five Survivor Series match and pedigreed Jason Jordan, it was immediately clear that he and Kurt Angle were going to have problems.

It took until the closing moments of the match, with everything already in hand and Angle ready to have Shane McMahon tap out, but Triple H’s cause was eventually realized as he attacked Angle from behind, pedigreed him, and allowed McMahon to pin Angle before ultimately still claiming the match for Team Raw.

The set-up of dream match scenarios, especially early on, was a lot of fun to watch and while the in-ring work wasn’t spectacular, it was solid. Many will call the conclusion a bit overbooked, but it planted multiple seeds as we near the beginning of WrestleMania season. Perhaps it served its purpose. Time will tell.

It was a rather one-sided conclusion to an otherwise heavyweight classic of a traditional Survivor Series match, but it certainly laid the groundwork for what’s to come on the road to WrestleMania.

Everything about this match just felt big. From the time the horns in Angle’s entrance hit, even after an amazing match between AJ Styles and Brock Lesnar, the crowd had an entirely different gear to hit, and they were ready to do it well before the bell even rang.

Action started with McMahon blindsiding Strowman — and he immediately realized the folly of his efforts when Strowman threw him all the way across the ring. Samoa Joe and Randy Orton tagged in, and that’s when the action truly started in earnest.

Joe got the early edge, with both an RKO and a Coquina Clutch teased, and that offered Finn Balor the opportunity to tag himself in. The crowd got heated again when Shinsuke Nakamura extended his hand, and the two former NXT champions mixed it up as the crowd got into a hearty “NXT” chant. The mind games started early, when both Balor and Nakamura broke on the ropes by taunting each other.

Balor looked over to Triple H, who extended his hand, and Nakamura beckoned him to “come on,” which Triple H happily obliged. After a brief back-and-forth, Triple H hit a facebuster with his knee to Nakamura’s face which sent him stumbling backward — allowing Bobby Roode to tag in for the first time, and thus pitting Triple H against two of his most successful NXT efforts back-to-back.

Roode got in some good licks and some big chops, but ultimately fell to a spinebuster. Triple H mocked Roode’s “Glorious” chant, swirling his hands before hitting a suck-it taunt, but missed a pedigree as Roode hit a spinebuster of his own. They went back and forth again, missing their finishers, and then Triple H drove Roode into the corner, allowing Angle to tag in for the first time.

Angle hit three German suplexes, but Roode rolled over and allowed Nakamura to get back in there. Even as Team Raw spilled into the ring without tagging into the ring, Nakamura was able to attack all that came after him until he angered Strowman and ran himself right into a running power slam: Braun Strowman eliminated Shinsuke Nakamura

After a back and forth with Roode, Strowman hit another power slam, sending him out as well; Braun Strowman eliminated Bobby Roode.

It was all going too well for Raw, though, as Samoa Joe tagged himself in and caused the whole team to fall victim to in-fighting. Angle and Triple H went toe-to-toe, and then the whole operation broke down as Orton and McMahon used the distraction to try to even things out.

John Cena and Orton failed to hit an Attitude Adjustment and an RKO, respectively, but did manage to knock Strowman out to the floor by working together. Strowman was right back up, though, and sent them flying as he prepared an announce table — for his own demise, as it ended up. Orton and Cena alone could not suplex Strowman through the table, but McMahon and the two eliminated Team SmackDown members were able to make it a five-headed effort.

Samoa Joe was able to stifle McMahon’s attempt to hit a flying elbow on the fallen Strowman, but that soon led to Joe and Cena mixing it up. This Survivor Series match was only the second time they’ve been in the ring together since Joe joined WWE, after breaking into the business and training together almost two decades prior, making it a special moment in and of itself.

Joe set up Cena with a Uranage, but as Balor tagged himself in, Joe’s preexisting tension with Balor boiled over and he stood in Balor’s way to prevent from hitting a Coup de Grace, because he wanted the glory for himself. Cena hit Joe with an Attitude Adjustment, hit Balor with one as well, and then hit Joe a second time with the AA to earn the pinfall victory; John Cena eliminated Samoa Joe.

Angle stepped in, and suddenly, their rivalry of more than a decade prior came back to the surface. Angle locked in the ankle lock briefly, Cena shook out, but then Angle popped up and hit an Angle Slam. McMahon ran in to break up the fall, but Balor successfully hit the Coup de Grace on Cena and Angle followed it up with a second Angle slam. That was enough to knock Cena out midway through; Kurt Angle eliminated John Cena.

Balor and Orton clashed in the ring, and during a break in the action, Balor spilled to the outside and nailed McMahon with a low dropkick into the barrier. He quickly got back to business by hitting a pair of dropkicks on Orton, but missed his shot at the Coup de Grace. Orton popped up and hit an RKO out of nowhere and Balor’s run was over; Randy Orton eliminated Finn Balor.

Angle and Triple H worked together briefly, but Orton disrupted the process long enough for everyone to be down. As McMahon recovered an extended his hand for a tag, Sami Zayn and Kevin Owens ran through the crowd to pull him off the apron and thwart the effort. McMahon battered both men with a steel chair, Orton hit an RKO on Owens, and the threat was otherwise averted.

All of that time, however, allowed Strowman to recover and tag himself in. He was quickly able to hit a power slam on Orton, and all of a sudden, McMahon faced a three-on-one deficit; Braun Strowman eliminated Randy Orton.

As Strowman stood poised in the ring, flanked by Triple H and Angle, McMahon paced on the outside of the ring as he tried to figure out how best to deal with this situation. After a couple of moments, he finally steeled himself and beckoned Strowman on — until Triple H tagged himself in and insisted of facing off with his brother-in-law. They circled for a bit, but Angle insisted on going GM vs. GM and tagged himself in instead.

McMahon got the better of the exchange throughout and attempted a half dozen pinfalls between DDT’s side-Russian leg sweeps and anything else he could think of. Angle finally turned it around and hit the Angle Slam, and slid right into the ankle lock, seemingly locking up the match.

McMahon simply would not give up. He tried to kick through, but Angle rolled with it. He teased tapping out, nearly reached the ropes.

Then the ruse was discovered. Triple H broke it up, hit a pedigree on Angle, and rolled McMahon on top of Angle for the pinfall; Shane McMahon eliminated Kurt Angle.

Triple H and Strowman stared each other down for what seemed like an eternity, trying to figure out what happened, and Triple H eventually seemed to briefly help McMahon before turning around and nailing another pedigree to lock up the match for Team Raw; Triple H eliminated Shane McMahon; Triple H and Braun Strowman are the survivors.

Triple H lifted Strowman’s arm multiple times as though he should be happy they won, but Strowman never stopped staring. He choked Triple H into the corner, screamed at him, but ultimately let him go. He turned his back though, setting Triple H up for a chance to blindside him for a pedigree, but Strowman wasn’t having any of it. With a running power slam, Strowman was the only man left standing at the end of the night. He added a second for good measure, ripped off his shirt, and sent the fans home happy.