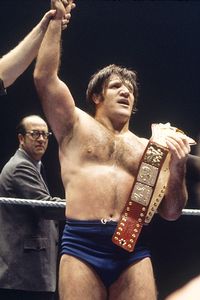 May 17, 1963 – Bruno Sammartino defeated Nature Boy Buddy Rogers in Madison Square Garden to win the WWWF Title; the match lasted 48 seconds. Recently dubbed as “the original screwjob”, promoters Joseph “Toots” Mondt and Vince McMahon Sr. led Rogers to believe that the contest would end in disqualification. Bruno informed Rogers of the last minute change in plans in the ring as they were about to wrestle each other.

Bruno said “We can do this the easy way … or the hard way”, Rogers chose the hard way. Rogers was overwhelmed by Bruno’s immense, raw strength, Rogers submitted to Bruno’s back breaker finisher. Bruno Sammartino was crowned WWWF Champion, and a new era was born, 50 years ago.

Check out the Forum thread here: