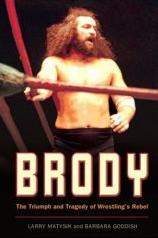 For the better part of two decades there was one wrestler promoters and fans loved but also feared despite him never wrestling for the former World Wrestling Federation and World Championship Wrestling. His name was Frank Goodish but you probably know him better by his ring name, Bruiser Brody. From World Class in Texas to the rings of Japan, Bruiser Brody thrilled audiences until July 16, 1988 when Brody wrestled in Puerto Rico. That night Frank Goodish was murdered in the venueâ€™s locker room by wrestler and WWC booker Jose Gonzales. Goodish left behind a young son Geoff and wife Barbara. Nearly 20 years later Mrs. Goodish joined with Wrestling at the Chase author Larry Matysik to create a living tribute to the man and his wrestling persona, BRODY: THE TRIUMPH AND TRAGEDY OF WRESTLINGâ€™S REBEL (ECW press, 206 pgs, $19.95 US)

Let me say I only knew the legend of Bruiser Brody by trading stories with wrestlers who knew him and fans that grew up watching him plus the couple of WCCW matches I saw on ESPN in the 80â€™s. So I was excited to read how a former football player and San Antonio Express sports writer Frank Goodish became the legendary Bruiser or as he was called in St Louis â€œKing Kongâ€ Brody. I am happy to say that Mr. Matysik and Mrs. Goodish have created one of the best wrestling biographies ever. Both provide hundreds of stories and memories and I am happy to say that not one of them makes the book dull. They get some help from other people that knew Goodish/Brody like former tag team partner Stan Hansen, Terry Funk, Buck Robley, Jack Brisco, Kevin Von Erich, JJ Dillon, â€œPlayboyâ€ Gary Hart and others. Also included are people that only knew Goodish as a friend and neighbor for decades. The book is opened with a forward by Wrestling Observer publisher David Meltzer whom befriended Goodish in the 80â€™s and an introduction by hall of fame announcer Jim Ross who knew Goodish from his time working the Mid-South Territory.

This book gives a direct and honest look at Brodyâ€™s career from his debut to one of the worst nights in wrestling. Thanks to his working for famed St. Louis promoter Sam Muchnick, Mr. Matysik is able to take you behind the curtain to see how Goodish created Brody and how he looked out for himself when it came to dealings with penny pinching promoters. In between the wrestling talk Mrs. Goodish talks about her life and how she became Mrs. Goodish after meeting Frank on one of his trips to Australia in 1977. The book is filled with photos of Brody in action and Goodish at home with his family. The hardest chapters to read are titled What Might Have Been where Matysik and Goodish contemplate if Brody had never gone to Puerto Rico. Would he have possibly gone to WWF and wrestled then champion Hulk Hogan who he had faced in Japan? Would he have gone to WCW or even ECW? Would he be working as a road agent for WWE now and taking an active role in his sonâ€™s life? Thanks to Mr. Gonzalez we will never know but this book will help you remember the impact Goodish and his ring persona left on the world of wrestling for years to come.