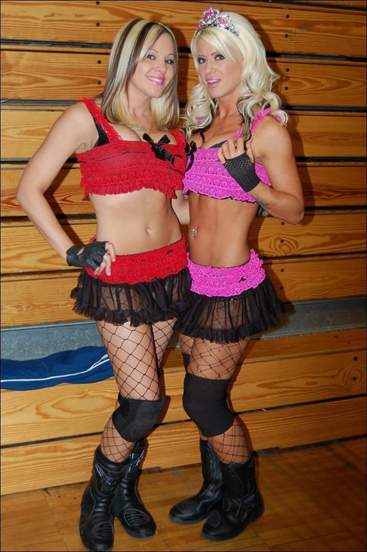 Some fans are just tired of TNA wrestling. I personally still like Total Nonstop Action Wrestling and like the product more than the idiotic WWE program. Then again, I probably would prefer to watch Nickolodeon’s Icarly more than WWE programming. So saying something is better than WWE is NOT a compliment at all.

There are rumors of Paul Heyman joining TNA and possibly giving them a whole new look. I am definitely not opposed to this because even though I like TNA wrestling, there are things that need to be changed and a great example of that was last night TNA Victory Road PPV match. More specifically Madison Rayne defending the TNA Knockout championship.

For example, on last night’s PPV Victory Road, Madison Rayne defended her Knockout Championship against Angelina Love. If Angelina lost her career would be over. So an unknown person (female, because you could see she had a rack kind of) drives a motorcycle to the Impact Zone. Madison and Angelina look confused. Angelina is on the outside and this mystery woman hits Angelina and throws her in the ring. The referee calls for the DQ and Angelina wins the title. A terrible win. But then again Angelina also started a reign as champion by opening a lockbox. Poor Angelina. No respect.
Wait! It gets better! So this person basically cost Madison Rayne the Knockout championship. Madison is obviously upset, so what does she do? She hops on the motorcycle’s back WITH the person that just cost her the title and they drive away.

I constantly bash WWE for illogical things in their storylines and overall boring and terrible booking. So it is only fair that I rant about something with TNA. This was just absurd on all ends.

Let’s start from the beginning. Mystery woman rides in. there is no indication she is with Madison Rayne. So I would think that the referee would force this person away. NOPE!

Mystery woman beats up Angelina, which could cause Madison Rayne to lose her Knockout title. Madison Rayne is furious. Madison Rayne will get her hands on the mystery woman to show the referee they are not together. NOPE!
Angelina, being a “babyface”, says that she did not come to tonight show to be handed a title like that. She came to beat up Madison and show her that she is an original and better than she could ever hope to be. NOPE!

Well, that’s pretty much it. A terrible ending. I’ll tell you what’s not terrible though. The Sunset Flip Wrestling Show and you can listen to the latest show at sunsetflipwrestling.podomatic.com

This week features the Raw report (with Disney’s Gummi Bears theme), Triple H out of Summerslam (yay!), Hart Watch 2010, The Adventures of Jack Swagger and much more. Check it out and have a great week everyone.