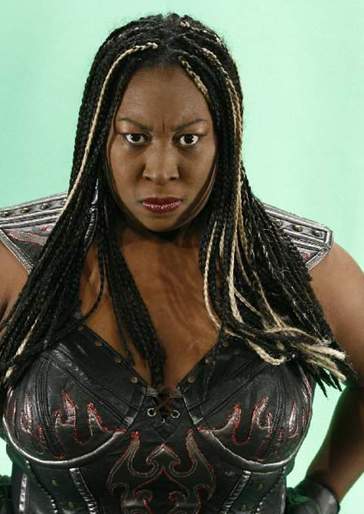 AWESOME KONG DISCUSSES JOINING WWE, MISCONCEPTIONS ABOUT HER TNA DEPARTURE, WHETHER SHE’D RETURN TO TNA, “THE SPONGE DUDE”, AND MORE By WorldWrestlingInsanity.com

She’s spent her whole wrestling career being either Amazing or Awesome.  Now the dominant former TNA knockouts champion Amazing Kong joins James Guttman for an uncut 30 minute ClubWWI.com shoot that fans have been waiting for!

Kong has rocked rings all across the world.  She’s pounded foes into the ground and made herself into one of the most unique and followed stars in female wrestling.  Later, her departure from TNA following a backstage altercation made her one of the most controversial.  Now hear her story from the woman herself – complete, uncut, and only on ClubWWI.com.  From Chyna‘s influence on her career to the WWE Hall of Famers supporting her WWE debut to the reality show that jumpstarted her career, she talks about it all.  For a full list of topics, head to: http://www.worldwrestlinginsanity.com/

As one of the cornerstones for TNA’s knockout division, Kong’s departure from the company left people shocked.  During her ClubWWI.com shoot, James Guttman calls her TNA’s Daniel Bryan due to the outpouring of support from fans after she left.  He asks her about the fan reaction and the former Knockouts Champion says she was touched to see how strongly people supported her.

“It was and is still very touching. People still message me on Facebook and Twitter and all my social networks, asking when I’m coming back.  Even on Twitter, I see that people still message Dixie (Carter) to work it out with me and have me come back.  That’s something that I don’t want to say is never going to happen.  You never know what’s going to happen because nothing’s ever final in life.  But it really made me feel good that people really were behind me, respected my decision, and it just feels really good when people take your side. (laughs)”

JG compares her leaving TNA to almost a Shakespearean play with its symbolism. She represented the old guard of Total Nonstop Action for many fans while Bubba The Love Sponge, who she had a highly publicized altercation with, was associated with Hulk Hogan‘s new regime.  When it all went down, the entire conflict almost seemed to take on a life of its own.  Kong explains to ClubWWI.com members that all is not as it seems sometimes in wrestling…

“It really did and unfortunately, what people think and perceived to have happened, didn’t really happen.  You know, it just happened that I departed around the time of public events happening with me and the Sponge Dude, or whatever.  It was around the time of Mr. Hogan coming in that I happened to leave so people make assumptions that those are the reasons, which some of those could have been catalysts – not Mr. Hogan coming in because he was great to work with – but some of those other events may have been the catalysts.  But not the real reason I left.”

Kong  speaks in-depth about her TNA career including her debut, what she focused on the whole time, the response from fans, fighting Gail Kim, how her gimmick has evolved, having her departure blown out of proportion, fan shock over meeting her, and more.

But, as her ClubWWI.com shoot continues, James asks the question that Kong is asked constantly…WWE?  How highly does a WWE debut rate on Kong’s to-do list?

“I ask myself this question every day.  I ponder on it every day.  I weigh what it is I’m gonna do as far as my wrestling future every single day.  I have yet to come to a conclusion.”

Kong then discusses the WWE Hall of Famers who are supporting her possible WWE debut, when they met, one big reason she’s not in WWE right now, and more.  But she also adds this thought…

“So having that support and the support from fans makes me think…should I be over there?  Hmm, I should be over there maybe. (laughs)  I have to see about that.”