Baron von Raschke to be Honored By the CAC 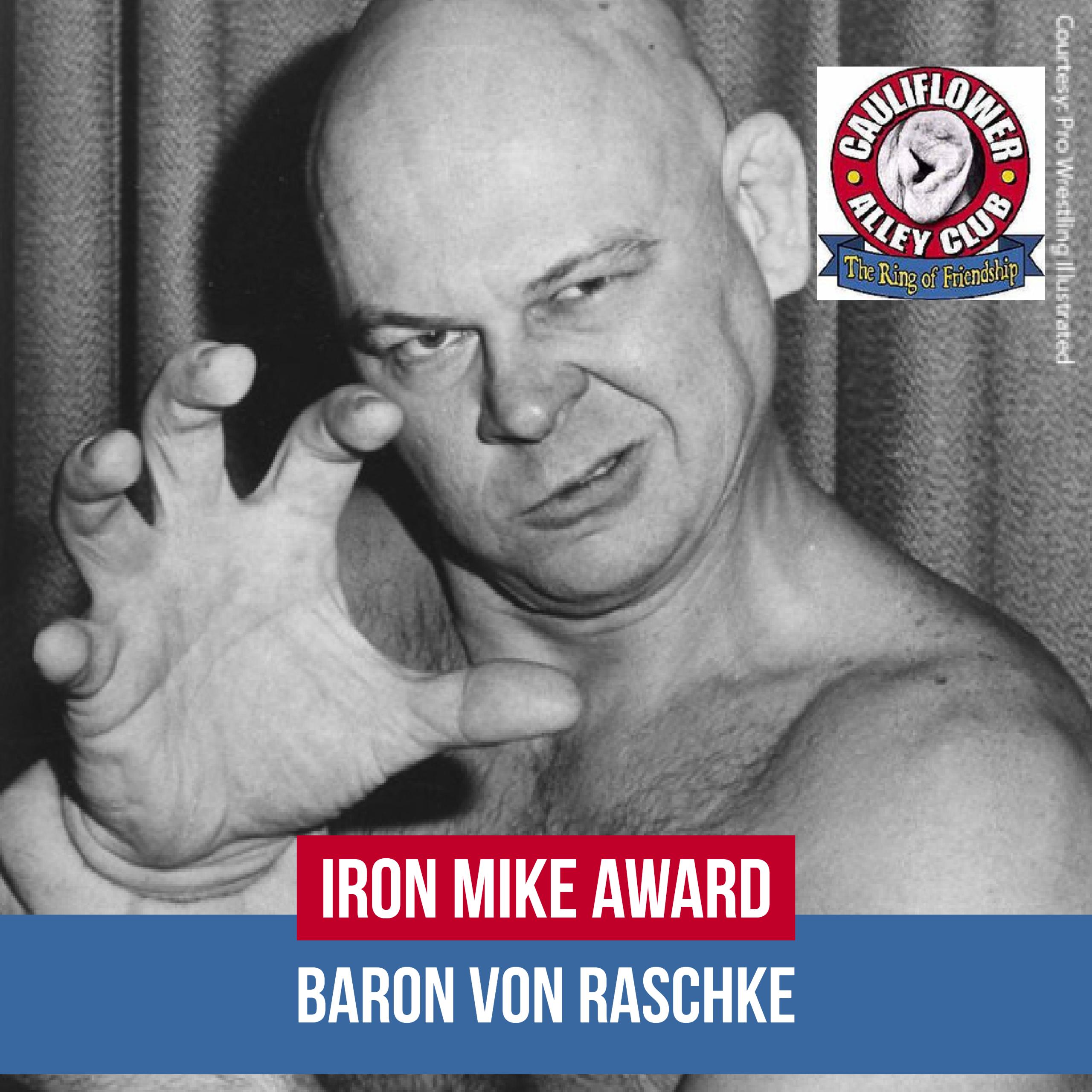 Baron von Raschke to be Honored by the CAC

The Cauliflower Alley Club is pleased to announce that Baron von Raschke will be honored at the upcoming CAC Reunion with a 2018 CAC Iron Mike Award!

After a successful amateur wrestling career and a stint in the United States Army, James Raschke started in professional wrestling in 1966 in the American Wrestling Association as a referee. He was soon wrestling under his real name, playing off of his amateur wrestling notoriety in the area.  He eventually changed his ring name to Baron von Raschke and claimed to be from Germany. He would do a goose-step and then put his finisher known as the “brainclaw”, on his opponent. His most memorable quote came at the end of an interview during which – running out of time before the next match and not fully hearing the question – he simply blurted out, “Dat is all da people need to know!”. Earlier in his career, the Baron had a finishing maneuver known as the ‘Prussian Sleeper’, a rather complex variation of a traditional sleeper hold. His trademark mantra at the time was; “I am ORDERED to win! I MUST win! and I WILL win!”

Throughout the 1970s and early 1980s he held numerous singles and tag team titles throughout several NWA and AWA territories, as well as wrestling for the WWWF, where his claw hold was “censored” by a huge red “X” on WWWF television because of the blood it would draw when applied. Managed by Fred Blassie, Von Raschke’s highest-profile match of his 1970s WWWF run came in March 1977, where he wrestled WWWF World Heavyweight Champion Bruno Sammartino for the title at Madison Square Garden in New York. Von Raschke lost the match by disqualification when, after Sammartino became tied up in the ropes, he shoved the referee away as he had his clawhold applied to Sammartino’s head. Sammartino defeated Von Raschke in a rematch a month later at Madison Square Garden, marking Sammartino’s last successful title defense before losing the belt to Superstar Billy Graham.

In 1978, Von Raschke was recognized as the first NWA Television Champion (the Mid Atlantic Television title had been renamed).

In May 1984, Raschke and The Crusher defeated Jerry Blackwell and Ken Patera for the AWA World Tag Team Championship.  They would lose the belts in August of that same year to The Road Warriors.

In 1986, he wrestled for the NWA‘s Jim Crockett Promotions where he reunited with former tag partner Paul Jones (who was now a manager) as part of Paul Jones’ Army.  He also filled in for the injured Krusher Khruschev, defending the NWA World Six-Man Tag Team Championship with Ivan and Nikita Koloff.  Toward the end of his run there he turned “face” against Jones and teamed with Hector Guerrero defeating the Barbarian and Pez Whatley at Starrcade (1986).  After teaming with Wahoo McDaniel at the 1987 Crockett Cup he left the National Wrestling Alliance.

He had a brief stint in the World Wrestling Federation in 1988 as the manager for The Barbarian and The Warlord (The Powers of Pain) under the name of The Baron, but was released shortly after his arrival.

Raschke resurfaced in the AWA, returning to the ring to feud with Soldat Ustinov and Teijho Khan in late 1988. He then went on to captain “Baron’s Blitzers” during the ill-fated Team Challenge Series. When the AWA folded, Raschke continued to wrestle for independent promotions, primarily in the Minnesota area, retiring in 1995.

Raschke also took part in one of the legends matches at WCW’s inaugural Slamboree: A Legend’s Reunion in 1993. He teamed with Ivan Koloff, losing to Thunderbolt Patterson and Brad Armstrong.

When not wrestling, Raschke worked as a substitute teacher. Upon retirement, Raschke purchased and managed a bric-a-brac shop called The Wigwam in Lake George, Minnesota. He sold it in 2000.

In April 2007, James Raschke began a several month run at the Minnesota History Theatre in a play based around his life, persona, and times in the AWA. The play detailed how a very mild-mannered and polite man created an in-ring gimmick that drew so much heat that he and his frequent tag-team wrestling partner (and real life friend) Mad Dog Vachonoften had to fight their way out of the ring.

Congratulations to Baron von Raschke on this prestigious honor!