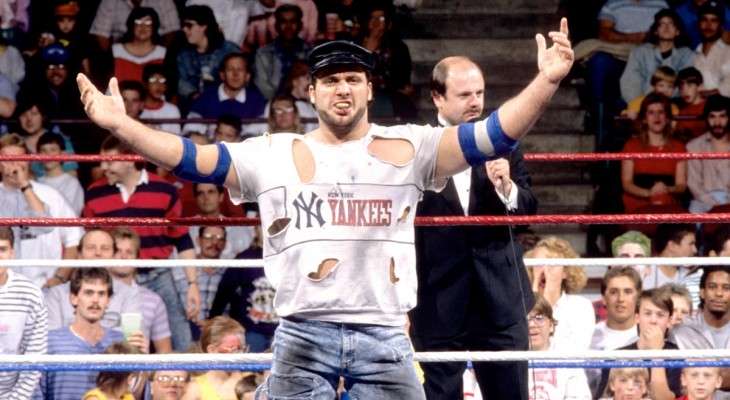 Everyone remembers the great Champions of professional wrestling. They are lauded for winning matches and titles, selling tickets and merchandise, and being the face of their promotions. But what about the wrestlers who never even came close to reaching that peak? Known as “enhancement talent”, or more commonly “jobbers”, there exists a certain group of wrestlers whose sole claim to fame in history is losing to basically every other wrestler on the planet. Some jobbers have made decades-long careers out of doing nothing but putting over talent. It’s a thankless job, one that brings neither money nor fame, but it’s one of the most important positions in any wrestling company, and it’s one we recognize today, with a list of the very best jobbers in wrestling history.

Also known as “The Duke of Dorchester” for reasons never fully explained, Pete Doherty spent over twenty years in WWE (his career was so long, it actually started back in the World Wide Wrestling Federation, when it was owned by Vince McMahon Sr), losing nearly every match he ever wrestled. As a jobber, Doherty never had a finishing move, but he did somehow manage to have a signature spot that was entirely appropriate for his level on the card: While he was locked in a full nelson, Doherty would put both feet on the ropes, forcing his opponent to release the hold. Of course, since both his feet were off the ground, this would result in The Duke landing flat on his back. Eventually, Doherty attempted to transition to the announce table, working as a heel color commentator on some of WWE’s syndicated programming. Much like his wrestling record, his announcing was terrible.

The man who was probably most famous for setting the first futility record in WrestleMania history, losing to King Kong Bundy in an alleged nine seconds at the very first Mania (the actual time was slightly longer), “Special Delivery” Jones was one of the most recognizable jobbers of WWE in the 80s. Jones actually teamed with WWE Hall of Famer Tony Atlas for a short period, even challenging for the WWE Tag Team titles, although they were unsuccessful in winning the belts. As part of that team, Jones would get one of the biggest wins in his career, as he and Atlas were the last two competitors in a battle royal (which was taped for VHS release) and decided to flip a coin to determine the winner, which ended up being Jones. In fact, Jones also ended up being the man who inducted Atlas into the WWE Hall of Fame in 2006.

No, we’re not talking about Sylvester Stallone, although the Stallion did debut at the height of Rocky’s popularity. Nobody would have mistaken the wrestler for Stallone’s iconic boxer, however, and in fact, he wasn’t even Italian! The Stallion, also known as Gary Sabaugh, wrestled in WCW (and its predecessor Jim Crockett Promotions) for over twenty years, and was one of the most well-known jobbers in the company. During his career, the Stallion also served as an advisor and stunt double on the infamous wrestling sitcom Learning The Ropes, which was exactly as bad as you could imagine, if not worse. Late in his career, the Stallion moved into a training role, opening a wrestling school in the Carolinas which counts among its graduates R-Truth and The Hardy Boyz.

Related Itemsbrooklyn brawlerFeaturedjobbers
← Previous Story 15 Terms You May Not Know The Meaning Of
Next Story → Larry Mercer: A Legend in the Making