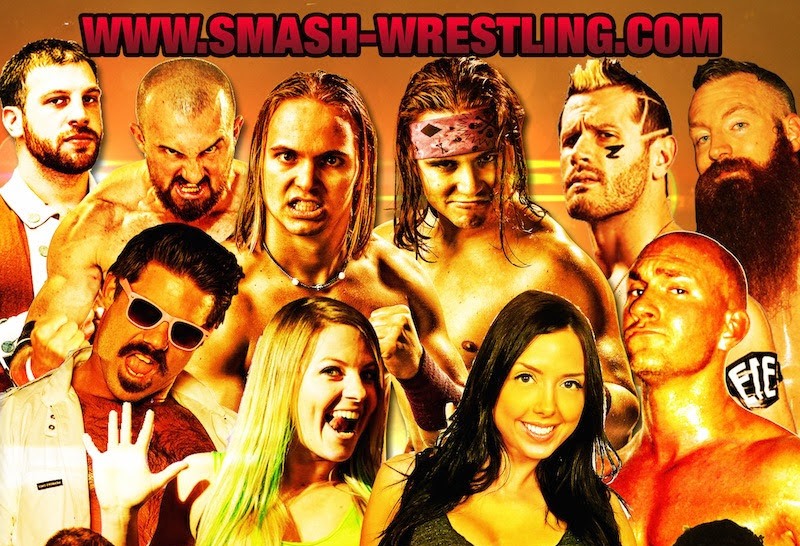 November 23rd, 5pm at the CanLan Sportsplex in Mississauga, Ontario, Smash Wrestling will host Challenge Accepted. Each match is structured around challenges made from one star to another.

The Young Bucks have been challenged by two of the best technical pro wrestlers on the scene today in Biff Busick and Drew Gulak…and the challenge has been accepted! Will Gulak and Busick bring the high flying duo down, or will they end up passing out at the ‘superkick party’?

‘Hacker’ Scotty O’Shea was carted off in an ambulance at “This Is Smash”, but before he was taken away, he told Managing Director of Smash Wrestling that he challenged Brent Banks to an AMBULANCE MATCH! THE FIRST IN CANADA’S HISTORY!

The World’s Cutest Tag Team, Joey Ryan and Candice LeRae have been challenged by the The World’s Fittest Tag Team, Pepper “The Body” and Cherry “The Bomb”. Who will prove to be the best intergender team in the world?

Johnny Gargano has challenged one of his best friends Gregory Iron. Iron coming off one of the most heartfelt and willful performance in Smash Wrestling history looks to continue to gain the respect of the pro wrestling world by competing against the very best!

Tyson Dux has challenged his student, Sebastian Suave. Usually the student challenges the mentor, but in this case, Tyson wants to see what his student has to offer now that they’ve both come so far!

John Greed feels that although the Overdogs have ended their problems with Josh Alexander, he still wants Josh’s respect on a personal level. At ‘Challenge Accepted’, Greed has the chance to earn that respect as Alexander has accepted Greed’s challenge!

VIP tickets have SOLD OUT for this show and general admission are flying out the door at the fastest rate ever! Make sure to grab yours NOW before they’re all sold out! Visit www.smash-wrestling.com/shop to GET YOUR TICKETS NOW!!!