The Harvard Of Pro Wrestling 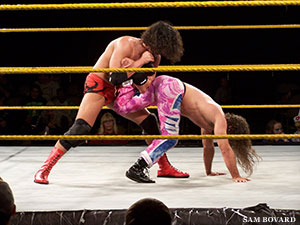 Before Cena And Lesnar Were Stars, They Went To ‘Harvard Of Pro Wrestling’
Article and photo courtesy of Sam Bovard, writer for thepostgame.com:

Rip Rogers might be a genius. Just ask him. He’ll tell you how, in college, he wrote just one article for the Indiana Central student newspaper, only to win the conference sportswriter of the year award. How he coached high school football in Union City, Indiana, for only one year – and led the Braves to a 9-1 record. If you value your dignity, don’t even think about matching wits with him on 1920s baseball trivia.

But the most genius-like quality about Rogers has nothing to do with accomplishment. For 26 years, he made a career in professional wrestling by making others look good. He could sell getting punched, kicked and thrown out of the ring better than anyone in his field. Professional wrestling is the art of athletic performance – and during his career, Rogers was DeNiro. He might just be the best loser in pro wrestling history.

To the bulk of WWE stars, that might seem like a dubious distinction. But Rogers is from the old school. After so many years of wrestling in dingy and dangerous venues, and traveling the globe to chase the ever-elusive gig, he knows what it takes to stay in such a fleeting profession. It’s simple, really.

“Overqualified and over [expletive] prepared,” says Rogers. “To stay ahead, you’ve gotta be able to do this-this-this and this. Because in this business, they’ll fire you for no [expletive] reason.”

Today, you won’t find the former “Convertible Blond” on the receiving end of any bodyslams. Instead, Rogers, now 55, lurks among the cluster of mobile homes and pick-up trucks in suburban Louisville. If you get lost in the tangle of empty warehouses where he’s rumored to be found on Saturday afternoons, follow your ears: You’re sure to hear his R-rated rants echoing off the rows of aluminum and concrete.

The area may not be glamorous, but it’s home to one of the most respected breeding grounds of wrestling talent in the nation – Ohio Valley Wrestling. The mountaintop of pro wrestling is Sunday in Atlanta at Wrestlemania 27. But the ascent starts at OVW. There is no better place to learn how to lose in America.

Since 2000, Rogers has guided raw, inexperienced wrestlers to WWE and TNA stardom. His three-hour classes attract aspiring wrestlers from literally all corners of the globe – Japan, England, Hawaii, Minnesota – to settle down in the less-than-striking flatlands of Kentucky. Although OVW ended its affiliation with WWE in 2008, it still remains the foremost in wrestling education, largely for one reason.

“Bar none … not because he’s my business partner, or because he’s my friend of 35 years … Rip’s the best in the business,” says OVW’s owner, Danny Davis. “When it comes to educating and giving the talent a foundation, there’s none better.”