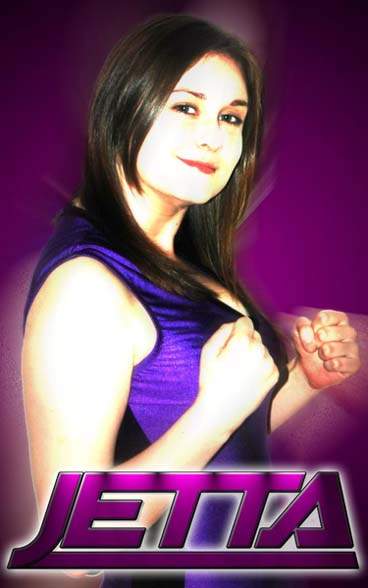 Captured-Beauty.com had the opportunity to talk with ChickFight and SHIMMER star Jetta. The newcomer to the American Women’s Wrestling scene answered a handful of questions put forward by members of the Captured-Beauty forum. Jetta discussed breaking into the business, working with Eden Black, being thankful for ChickFight’s expansion into the UK, and becoming an honorary member of the Minnesota Homewrecking Crew alongside Rain and Lacey.

For more interviews like this (others include Daizee Haze and SHIMMER Champion MsChif) head over to the Captured-Beauty website and forum.

How did you first get involved in wrestling?
It was kind of by mistake, a friend of mine was really into wrestling and I used to always make fun of her. Then the better friends we became the more she tried to force me into liking wrestling, one night I stayed around hers and she made me watch a PPV I forget which one it was around late 2001 and I actually quite enjoyed it and from then showed an interest and would watch it with her a lot. Then we found out there was a training school near by us went along and here I am!

Who inspired you?
There wasn’t really a set person that inspired me I just thought it would be a fun thing to do, like I say I wasn’t a big fan growing up but as I started training I watched more wrestling other then WWE and really found out about the history of British wrestling. I guess from then someone that inspired me was (and is) Jim Breaks mainly as he always worked really hard to make others look good, bumping all over the place for people but still managing to look a threat as well as really entertaining and interacting with the crowd.

What was the first ever Women’s match that you saw? What’s your opinion on those involved?
Ohh God! I have NO idea; it was probably a WWE match. Though I do remember the first time I watched Japanese women’s wrestling and I was blown away! I was just like WOW these ladies are insane! It was like nothing I had ever seen before. My opinions on the ladies was that they were very talented and that I didn’t want to be kicked by them ha-ha.

Where did you get your training in England, who trained you, and were there any nay-sayers trying to hold you back?
I trained at MPW in Coventry it isn’t running now, but a lot of the character and match structure stuff I learnt from working for promotions like Allstar and just general trial and error and I’m still learning what does and doesn’t work and I still try to get tips from others when possible and of course when wrestling different people you learn new stuff. There were no nay-sayers to my face, though one of the trainers at MPW did try to stop me branching out and working for different promotions, I still to this day don’t understand what his problem was, but thankfully I didn’t listen did my own thing and it lead to me breaking out a bit.

Before ChickFight branched out to England, how did you make a living as a professional wrestler?
I have never wrestled full time for a girl in this country its very hard to do so but before chickfight came here I was still wrestling a lot for LDN, SLAM, WAW, ALLSTAR here and there along with a lot of other promotions. I think chickfight brought a lot more attention to the women’s scene here but we’ve always been here.

How do you compare the circuit of the US to that of the UK?
Well the US is a lot bigger, I mean the UK is like the size of one of the smaller states. But I get the impression it’s probably the same but the US is on a larger scale, both have big promotions both have small ones that have no business running shows! I think in the US they market themselves a lot better and that’s a lot of why people are more aware of the promotions over there then over here but generally it seems most indie shows there pull around the same numbers most do here.

How did the opportunity of working for SHIMMER come about?
I first heard about Shimmer just before Lacey and Daziee Haze came over in 2007. I watched a couple of matches off one of the DVDs and I was impressed and surprised someone was taking a chance on all women’s shows. To be honest I didn’t think they would be interested in bringing someone over from the UK but a friend of mine offered to make me a DVD and all I had to do was send it off so I thought why not! I think I worked the ROH shows in Liverpool before I sent my DVD off and I guess that was kind of a trial. So it was a mixture of sending a DVD and I guess making a good impression at ROH in Liverpool.

How excited were you to be included in SHIMMER, and be affiliated with the Homewreckers?
I was excited as I was getting the chance to wrestle in America; to be put with the Home wreakers was a lot of fun … I LOVE those two hello! Best in the world!!! I’m proud to be the cream to their Oreo.

Who do you look forward to facing the most in SHIMMER?
The great thing about Shimmer is I would honestly look forward to wrestling anyone on the roster. I would like to get the chance to punch Alison Danger in the mouth though.

What’s it like working with well known talents such as Cheerleader Melissa and Daize Haze, did you feel any pressure to work to their level?
I wouldn’t say it’s a pressure if anything its less pressure because they know what they’re doing so it’s easy to work with them.

Have you had any serious injuries from wrestling? If you have, How?
Yes I’ve had two one in 2005 I broke both bones in my right forearm in a tag match. Both bones were broken so badly I had to have two metal plates put into my forearm hence the two scars I have on my right arm. I was 17 at the time. More recently in Jan 2008 I messed up my back and I ended up pretty badly hurt for a few months.

Which style do you prefer to wrestle in?
I guess British? I don’t know if I have a style! I guess I like to do simple heel/face matches and try to get the crowd as involved as possible I mean I work a lot of family shows so my style fits that type of crowd.

How did you come up with your finisher? What do you call it?
The only way, I stole it! I doesn’t have a name the person I stole it off told me to call it the “Jump Jett” haha but I call it a strangle hold lung blower.

Do you follow WWE and or TNA?
Not really I mean I hear about stuff from people at shows and I watch the odd thing I try to always watch Wrestlemania. I do have an idea of what’s going on but I don’t watch it every week.

What are your thoughts on the respective divisions?
On the women’s divisions? I think the WWE one is ok they seem to be moving away from all the bikini matches and a lot of the girls are very talented. I think that TNA have the edge on their women’s division though purely because all of the girls are distinctively different and have their own characters and a lot more time is invested into their matches.

In your opinion who is the best wrestler out there today?
Female – Sara Del Rey she’s just looks really natural in the ring everything she does looks flawless. Same for Amazing Kong, Melissa and ‘Chif.

Lacey, Rain, Daziee – All good wrestlers but what makes them stand out is they’re entertaining characters really larger than life they know how to work a crowd really well. I think all three would fit in really well on the camps over here.

In England Saraya she just has this presence that I’ve never seen with anyone else, Lisa Fury I’m really surprised she’s not in WWE yet. Eden black she’s got a different style and look to anyone else in the UK.

Men – Doug Williams, Johnny Kidd who is still amazing! Robbie Brookside who I have learnt a lot from.

Is it difficult finding other opportunities to wrestle in America considering your exposure is relatively new?
Ermmm.. I guess so but I’m only ever out there to do Shimmer I’ve never really tried to get work anywhere else; though I guess it probably would help if promotions over there knew who I was! But to be honest I’m happy going over and doing Shimmer but if I did get asked to work other places I would do it.

What was it like wrestling Dangerous Angels at the Ring of Honour show in Liverpool?
A lot of fun I was gutted that in MY home country they got a USA chant…. what was that about! But I had a lot of fun. I don’t remember too much from the match itself though I do remember it being Eden Blacks fault we lost!

What do you think of Custom Matches (Online) which so many talented wrestlers have participated in? Would you consider doing it?
I have done them for Slammin’ ladies, I think its fine I mean I wouldn’t do anything weird but just straight matches I don’t have a problem with, they’re good for practicing stuff making extra cash while I’m over and just getting some general ring time. They’re a good laugh also.