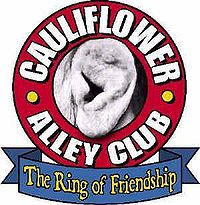 The Cauliflower Alley Club is proud to announce the 2014 honorees to be recognized at the 49th anniversary reunion, June 2 – 4, 2014 in Las Vegas, Nevada.

Along with Several Other Surprise Awards Including The Golden Ear, The Future Legend along with a few others….

Congratulations to all the 2014 Cauliflower Alley Club Honorees!