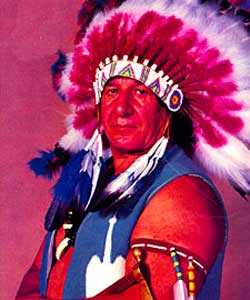 CHIEF JAY STRONGBOW INTERVIEW
By: Bob Colling from www.pdrwrestling.com
(WWF/E, WCW, TNA, ECW, ROH and other reviews all in one place! Including recaps of never televised WWF/WCW house shows!)

Chief Jay Strongbow was the guest on In Your Head Wrestling Radio hosted by Jack E. Jones, Oneinchbiceps and Barbie Richards at http://www.inyourheadonline.com

Chief Jay Strongbow will be appearing for Promo last on June 4th and 5th in Atlanta, GA. Strongbow doesn’t do a lot of fan fest appearances. He has only done three of four of them.

He says that Georgia is a little slower than everywhere else in the Northeast. He likes that it is quiet there as compared to other places. Strongbow likes being recognized when people ask for his autograph.

He talks about Duke of Dorchester and says that he is a classic wrestler and their will be only one of him.

Jack brings up a Shark Cage match with Doug Kent in Detroit. Strongbow didn’t like working in a small cage. He doesn’t know who came up with the idea and he didn’t want to do it at first but did it anyway.

Billy Graham is brought up and Strongbow says that he was in “never land” and wasn’t one of his favorites. Strongbow didn’t appreciate Graham saying he was in the twilight of his career and let him know in the ring. Strongbow also believes that Graham was all talk.

Strongbow helped about 80% of the wrestlers when he was working as an agent in WWF. Strongbow helped Bret Hart and his brother. He also helped Jack Briscoe, Hulk Hogan and Randy Savage to name a few. Strongbow says that Hogan says his “Hulk Up” was like his War Dance.

Strongbow thought the Hall of Fame was a great moment for him. He was inducted by his good friend Gorilla Monsoon. He doesn’t have many stories about Gorilla other than he knows that Gorilla can eat ice cream and cake!

Strongbow would like to see the fans of Atlanta. He will most likely bring his headdress.

Also join our free message board http://inyourheadboard.proboards.com/index.cgi to interact with the hosts and fans of IYH and to leave questions for upcoming guests.