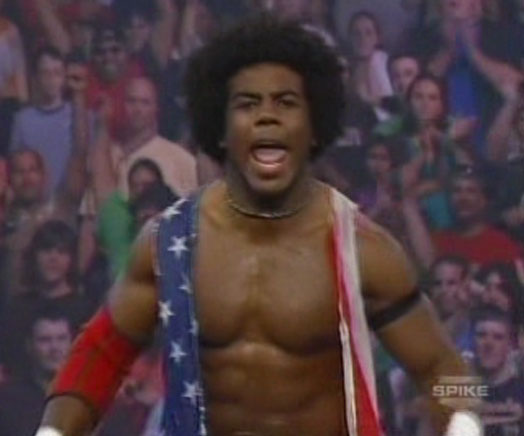 AUSTIN “CONSEQUENCES” CREED SPEAKS OUT ON HIS TNA RELEASE, INITIAL REACTION TO HULK HOGAN JOINING THE COMPANY, THOUGHTS ON JOINING WWE, AND MORE

Less than two weeks since he left TNA, ClubWWI.com gets to deal with the Consequences. In one of his first interviews since his departure, former TNA Tag Team Champion Austin “Consequences” Creed joins James Guttman for a 30 minute uncut shoot interview fans have been asking for!

From Pac-Man Jones to Black Machismo, Creed had become a Total Nonstop Mainstay since 2007.  Now as he embarks on the next stage of his career, Consequences talks about where he’s been, where he is, and where he’s going.  Hear his own story from his own words.  Featuring talk of everything from the full story of why he threw up during his infamous match with Amazing Red to the reason he joined show choir to his Pac-Man Jones tryout.  It’s your chance to hear from Austin directly before hearing rumors from everywhere else.  The exclusive shoot is up  at ClubWWI.com right now!  For a full list of topics, head to: http://www.worldwrestlinginsanity.com/am2/publish/newsnotes/ClubWWI_Creed.shtml

Also, for details on all our new guests, shows, and articles, you can join the World Wrestling Insanity Facebook Fanpage at: http://www.facebook.com/pages/The-World-Wrestling-Insanity-Dot-Com-Page/275219172353

Less than two weeks since his Total Nonstop Action release, Austin Creed had plenty to talk about with James Guttman on ClubWWI.com.  The main question that most fans have with guests who had just recently left their companies is about future plans.  JG starts things off by asking Creed about them.  Now free from TNA, what’s the next step?  What can fans expect from the exciting former X-Division star?

“I’m good, man.  I’m still working on getting my P.H.D.  So I’m focusing on that still.  Still wrestling on the Indys, so it’s not too bad actually.”

At 23 years old, Austin still has a long career ahead of him, if he chooses.  James and Creed discuss his youth and how he got his initial tryout with TNA as a partner for Pac-Man Jones during the infamous angle they worked a few years ago.  Now, though, times have changed and TNA has moved from Pacmania to Hulkamania.  Many fans point to this new direction as one of the reasons people like Creed are no longer there.  Guttman asks about Hulk joining the company and what Austin’s initial thoughts were when he heard about the yellow and red regime riding into town.

“I kind of saw it as, you know, the older guys coming in – the veterans coming in – and the younger guys getting to learn from them.  So that’s what I was most excited about because there were so many guys that I had the chance to see growing up and finally being the same locker room as them and learning the things that they know.  Still being very young and not having that many years in the business, I know that I’m still naive to a lot of things, but this was our chance to kind of find that stuff out and take our games to the next level.  So that’s what I was expecting.”

The former Consequences Creed goes on in his ClubWWI.com shoot to talk about what happened in TNA after the new regime came in, the feeling that TNA was always teetering between greatness and falling off the cliff, working with Jay Lethal, the insane story of why he threw up when wrestling Amazing Red, the X-Division mentality, veterans and rookies both painting each other with a broad brush rather than treating individuals and individuals, and more.

The other main question about his release that most will ask about is surprise.  Was it?  Did Creed see it coming and is WWE in the cards?

“It wasn’t really a surprise because they hadn’t really done anything with me in the past three months.  So honestly, I had been working the Indys like crazy, doing my thing there.  So, I’m booked up for the next two months.  I really wasn’t expecting (my release), but it wasn’t a surprise.  I understand why.  They weren’t using me.  They didn’t have anything for me storyline-wise.  So it’s better for them to let me go.  When I was there, everybody was really good to me.  I don’t really have anything to complain about.  It’s wrestling.  You can be used on one hand and on the other hand, they might not need you because they have some other guys to use. Once they started filtering in the older guys and a lot of us were hanging out at home, I got the feeling they were gonna cut us loose.  So I got my ducks in a row and was ready for it if it was going to happen. As for wrestling elsewhere, I’m just looking for other avenues.  I’m really big on Con.  Like  Dragon-Con and Comic-Con.  I’m a big nerd.  So I’ve been trying to hit up some of them that have wrestling shows.  I’m going to Japan in May for the first time so I’m looking forward to that.  It’s not really a bad thing.  One door opens, another one closes.  There’s more than one company to wrestle for and more experiences to have.  I’m 23 years old.  I still have a ton to learn.”

Austin’s ClubWWI.com interview covered a ton of topics.  For all your Creed information, you can check him out online at GoCreedGo.com or follow him on twitter at @AustinCreed