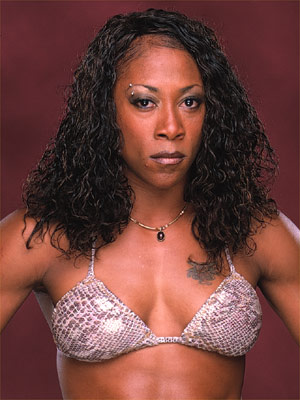 He was called up the morning of the show to replace a pummeled and broken Mikey Pacifica, who was literally annhilated by Danny Demanto and Kevin Matthews the night before in his match with Balls Mahoney against The Commandos. Pacifica himself was scheduled to replace the once-again-retired Vicious Vinny in the tournament, and this final roster change to replace him brought in Philadelphia’s own Devon Moore, an accomplished Northeast wrestling star in his own right who, with a partner with more victories in WSU than anyone else in the tournament, and the winner of the 2010 J-Cup Women’s Tournament the previous night, Alicia, ended up as the 2010 King And Queen Of The Ring Tournament winners on Saturday night April 3rd, as National Wrestling Superstars and sister promotion Women Superstars Uncensored concluded their two-promotion two-show weekend with this annual classic, which drew an enthusiastic and energetic throng of fans to Kearny, NJ’s Presbyterian Boys & Girls Club.

The show opened with NWS ring announcer Johnny Falco & WSU ring announcer Destiny introducing the field of eight inter-gender tag-teams and explaining the rules of the tournament. Devon Moore was introduced as a replacement for Mikey Pacifica, who was injured at the hands of Danny Demanto and Kevin Matthews the previous night in Neptune. Devon’s partner Alicia was originally scheduled to team with Demanto, but after witnessing what he did to Pacifica, she exercised her right to choose a new partner. A furious Demanto lamented on being “stuck with” WSU newcomer Marti Belle, and confronted Alicia, who promptly slapped Demanto. Devon Moore came to her aid, and NWS Commissioner Gino Moore ordered that the first-round match between the two teams begin immediately.

In the First Round Matches:

Devon Moore & Alicia defeated “The Cold-Hearted Playa” Danny Demanto & Marti Belle. Despite Danny’s power and Marti’s rookie enthusiasm, Devon and Alicia prevailed, with an Alicia-Bomb on Marti sealing the deal. Demanto took out his frustrations on Marti, who slapped him as well. (Demanto seems to have issues with his women wrestler partners all weekend!)

Former WWE developmental protege “Too Cocky” Kevin Matthews & former TNA star Nikki Roxx defeated J.D. Smoothie & former ECW Women’s Champion Angel Orsini. Angel and Nikki continued their rivalry from the previous night, and Angel had Nikki ripe for a pin after planting her into the mat with her “Kiss Of Death” Flatliner, but Matthews threw Smoothie out of the ring, and while the referee was checking on him, Matthews powerbombed Angel and placed Nikki on top of her in time for the referee to turn around and count 1-2-3.

“The Love Machine” Nicky Oceans & Jana defeated Junping Joey Janella & Niya by submission. The WSU rookie Niya made a good accounting of herself, and after a back-cracker by Janella on Oceans was poised to take out Oceans from the top rope, but Jana knocked her off, then after an Attitude Adjuster by Oceans on Janella, Jana locked Janella in the JanaVice, and the referee called for the bell.

WSU World Champion “The Latina Sensation” Mercedes Martinez came to the ring, and said that even though she was not contractually obligated to appear on tonight’s show, she was a fighting champion, and issued an open challenge to any WSU competitor in the locker room. This brought out none other than Melissa Coates, who flashed her ample muscles and promised to out-muscle Mercedes for the title.

WSU World Champion “The Latina Sensation” Mercedes Martinez retained her title by submission over Melissa Coates. Melissa’s power advantage indeed frustrated Mercedes early on, and she even powered out of Mercedes’ attempt to put her in a Fisherman’s Suplex, but then Mercedes reversed a powerslam attempt into a Rear Naked Choke, and Melissa eventually tapped out.

In the Semifinal Matches:

Devon Moore & Alicia defeated “The Love Machine” Nicky Oceans & Jana. Once again there was no stopping Devon and Alicia. Oceans broke up Alicia’s first Alicia-Bomb pin attempt on Jana, but Devon clotheslined Oceans out of the ring and Alicia hit a second on Jana for the pin.

Former WWE developmental protege “Too Cocky” Kevin Matthews & former TNA star Nikki Roxx defeated former ECW stars Balls Mahoney & Jazz. After an Underhook Back Suplex by Balls on Matthews, he and Jazz seemed poised to go to the Finals, but out came Bison Bravado and Amber, still smarting from their loss to Balls and Jazz in the first round. While Balls and Bison exchanged words on the outside, Amber snuck into the ring and DDT’ed Jazz. Nikki took advantage and covered Jazz for the 1-2-3. An enraged Balls picked up a chair and swung it in every direction in frustration.

WSU Spirit Champion (with manager “The Diva” Rick Cataldo) retained her title against challenger Tina SanAntonio. The rookie Tina made a good accounting of herself, but Brittney had the extra advantage of Cataldo on the outside, who pulled the referee out of the ring after a bulldog and pin attempt by Tina. Brittney eventually RKO’d Tina into the mat for the victory.

In the Tournament Finals, Devon Moore & Alicia defeated former WWE developmental protege “Too Cocky” Kevin Matthews & former TNA star Nikki Roxx to become the 2010 King And Queen Of The Ring. The fight began almost immediatey, with both teams, exhausted after two grueling matches each, were determined to put away their opponents quickly. After both Matthews and Nikki worked over Alicia for several minutes, Matthews missed a splash attempt and Alicia tagged in Devon who pummeled Matthews. Matthews tumbled to the outside and Devon took him out with a flying spalsh, leaving Nikki in the ring to receive an Alicia-Bomb and get pinned 1-2-3.

As Devon and Alicia were handed the crowns and celebrated with the fans, WSU World Champion Mercedes Martinez came out and congratulated Alicia on winning a second tournament this weekend, and once again told her she was looking forward to their match at WSU Uncensored Rumble in June.

NWS returns to action in two weeks’ time with a double-shot weekend Friday April 16th in Carteret, NJ and Saturday April 17th out in Tower City, PA, both shows headlined by former WWE star Rikishi.Follow NWS on the Web at www.nwswrestling.com.

WSU’s next show will be the Uncensored Rumble on Saturday June 26th in Union City, NJ, featuring the aforementioned WSU World Championship Match between Mercedes Martinez and Alicia, the Uncensored Rumble Match itself, and more to be announced. Follow WSU on the Web at www.wsuwrestling.com.