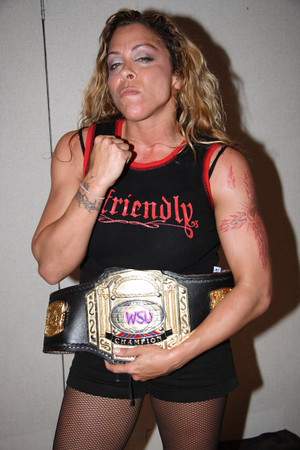 National Wrestling Superstars teamed up with its sister all-ladies promotion Women Superstars Uncensored on Friday night April 2nd for the first of two big shows this weekend, the 2010 Jersey J-Cup Women’s Tournament, which returned to its original home at Neptune, NJ’s Shark River Hills Firehouse Hall. A good crowd on a Good Friday filled the hall to watch eight of the top lady wrestlers in the Northeast, including a few former TV superstars, battle it out for the coveted trophy.

The show opened with NWS ring announcer Johnny Falco and WSU ring announcer Destiny introducing all eight participants. Former TNA star Nikki Roxx tried to take the trophy home right away, claiming she was just saving time on her inevitable win, but former ECW Women’s Champion Angel Orsini got in her face and the two almost had their match right away before they were separated by officials.

In the First Round Matches:

Alicia defeated Tina SanAntonio. Tina fought courageously but the newcomer was no match for the veteran Alicia, and soon fell victim to an Alicia-Bomb and was pinned.

WSU Spirit Champion Brittney Savage (with manager “The Diva” Rick Cataldo) defeated Marti Belle. Brittney claimed her original opponent Divina Fly didn’t show up because Brittney had sent her to the hospital after their last match. Belle put up a good fight, but with Cataldo’s interference, Brittney managed to put down Belle with an RKO for the 1-2-3.

Former WWE Women’s Champion Jazz defeated Jana. The double-tough Jana met her match in the super-tough Jazz, and after a hard-hitting brawl, Jazz put Jana away with a Michinoku Driver for the 1-2-3.

Former ECW Women’s Champion Angel Orsini defeated former TNA star Nikki Roxx. This was the most evenly-matched and competitive first-round match, as both veteran stars gave it their all. Nikki tried to work over Angel’s arm for several minutes, but the former WSU Champion held on in her quest for a shot to regain the gold, and eventually put Nikki down with her “Kiss Of Death” Flatliner for the pin.

Before the next match, The Commandos (“The Cold-Hearted Playa” Danny Demanto & “Too Cocky” Kevin Matthews) came out, with their manager Brittney Savage. After insulting the Neptune fans, they turned their attention (and insults) towards former WWE World Heavyweight Champion and Hall of Famer The Iron Sheik, who was in the building signing autographs. They then called out Mikey Pacifica, who would be facing them later that night, and asked him point-blank who had the balls to be his partner against The Commandos. Appropriately enough, the answer came in the form of former ECW hardcore icon John “Balls” Mahoney, who came to the ring armed with a chair. Balls asked Commissioner Moore that since The Commandos had a manager, they wanted one too, and pointed to The Iron Sheik, who gladly accepted.

In the Semifinal Matches:

Alicia defeated WSU Champion Brittney Savage (with manager “The Diva” Rick Cataldo). The title wasn’t on the line, but Alicia was still out for a measure of revenge. It was an uphill fight, though, as Cataldo provided plenty of interference from the outside, even pulling the referee out of the ring after Brittney was caught by an Alicia-Bomb. But Alicia hung on, and after hitting Brittney with a running knee-lift in the corner was able to pin her 1-2-3 to advance to the finals.

Former ECW Women’s Champion Angel Orsini defeated former WWE Women’s Champion Jazz. These two combat veterans exchanged holds and brawls for several minutes, and it looked like it could go either way, until Angel caught Jazz with a “Kiss Of Death” Flatliner for the pin.

WSU World Champion Mercedes Martinez retained her title against Amber O’Neal. Undefeated at 6-0, Amber came into the match cocky and confident, but soon realized she had bitten off more than she could chew, as the champion pulled out all the stops. A missed superkick by Mercedes accidentally took out referee Kenny Edwards, and Amber hit Mercedes with the title belt, but no referee to see the cheating also meant no referee to count the pin either. By the time the referee awoke, Mercedes had recovered, and planted Amber into the mat with a Fisherman’s Suplex to get the pin and retain her title, and end Amber’s undefeated streak in WSU.

The Commandos (“The Cold-Hearted Playa” Danny Demanto & “Too Cocky” Kevin Matthews, with manager Brittney Savage) defeated former ECW hardcore icon Balls Mahoney & Mighty Mikey Pacifica (with manager The Iron Sheik). Before the match started, Demanto revealed he had an ace in the hole, and pointed out the fine print in the contract for the match where The Commandos get to choose the referee, and called out “Mr. Entertainment” J.D. Smoothie. Commissioner Moore conceded that this was in the contract and there was nothing he could do. Balls and Pacifica refused to be intimidated, and took the fight to The Commandos. Demanto locked Pacifica in a Camel Clutch and teased The Iron Sheik at ringside, but The Sheik clocked Demanto with his cane to break the hold. After Balls was tagged in and cleaned house, a miscue by Brittney almost cost The Commandos the match, and an angry Demanto shocked the crowd by striking Brittney and leaving her laying on the floor at ringside. Balls Mahoney, a true gentleman at heart despite his hardcore image, went to help Brittney, which left Mikey in the ring to be double-teamed by Demanto and Matthews, and eventually pinned after an extremely fast 1-2-3 count by Smoothie.

As The Commandos were leaving the ring, they began to threaten a long-time fan sitting at ringside, but were stopped by NWS newcomers Pat Buck and Jay Silva, The Lone Rangers, who were also sitting at ringside. A brawl broke out between the two teams, and Commissioner Moore announced that the two would meet at NWS’ show in Basking Ridge, NJ in June, and warned them they would be fired if they went after each other before then.

In the Final Match, Alicia defeated former ECW Women’s Champion Angel Orsini to win the 2010 Jersey J-Cup Women’s Tournament Trophy. The two veterans and former WSU World Champions fought hard inside and outside the ring, neither giving any quarter in their quest to earn the next title shot. After finally getting back into the ring, Alicia fought her way out of Angel’s attempt at a “Kiss Of Death”, and planted her with a pair of Alicia-Bombs to get the three-count and victory.

The entire WSU locker room came out congratulate Alicia as she stood triumphantly with the trophy, except Angel who ducked out of the ring with a bitter expression on her face, as she had lost the only chance she had of getting a title shot. Then WSU World Champion Mercecedes Martinez came out and congratulated Alicia on her return to the number-one contender’s spot, and promised they would have the fight of their lives at Uncensored Rumble in June.

NWS and WSU continue their double-shot double-promotion weekend on Saturday April 3rd with the “2010 King And Queen Of The Ring Tournament” in Kearny, NJ.