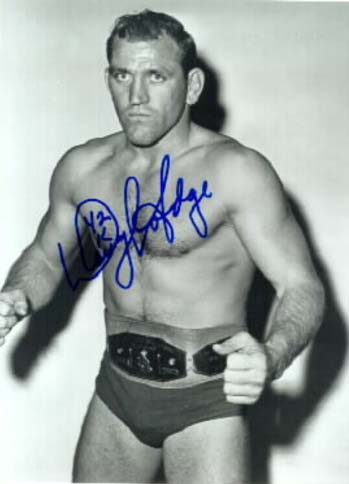 By: Bob Colling from http://wrestlingrecaps.wordpress.com/

Jack, OIB and Barbie Richards are joined by Danny Hodge. Hodge will be appearing at the NWA Legends Fanfest from August 5th- 8th in Charlotte, North Carolina. For more information please go to www.nwalegends.com

Hodge enjoys attending the fan fests as he likes meeting up with wrestlers and fans.

Hodge talks about several different holds in wrestling. Hodge says that a professional headlock is “awesome”. Hodge  never had to use his holds in the ring to protect himself. Hodge mentions that they had challenges were people would have to last three minutes in the ring to get $5,000. No one ever lasted the three minutes!

Hodge says that his favorite wrestling move was whatever someone would give him. Hodge says that God was good to him for his extra strength that no one ever sees. Hodge liked seeing the expression on peoples face when he put them in a hold. Jack volunteers OIB to take a hold at the Fan Fest!
Jack asks what kind of exercises Hodge would do. Hodge would pick cotton and chop lumber doing everything he could with his hands. Hodge says that he wasn’t going to disappoint someone who worked all week to see him wrestle.

Jack mentions that Hodge will be inducted into the Hall of Heroes. Hodge will be inducted by Jim Ross. Hodge says it is a honor and that Ross was a “super friend” when he started out in the business. Hodge knew that Jim Ross could do anything and wasn’t surprised that he became a successful commentator. Hodge says that Jim Ross barbeque sauce is by far the best sauce he has ever tasted.

Jack talks about Bob Sweetan and how Hodge gave Sweetan a receipt for taking liberties with Jim Ross when he was a referee.

Don Douglas calls in and asks Hodge about a match with Ron Wright. Hodge says that Wright was a tough kid and that he came back from going to the hospital. Hodge considers Wright a friend now but back then you fight for you life.

Jason calls in and asks Hodge his thoughts on the modern day wrestlers like Brock Lesnar and Kurt Angle and asks about Bob Backlund. Hodge puts over Backlund as a tough man and admires Backlund for what he had done. Hodge didn’t answer about Lesnar and Angle, possibly forgetting the question.

Joel calls in and asks about a Japanese promoter named Ricky. Hodge says that Ricky was a god of wrestling in Japan. Hodge talks about beating Lou Thez for a championship in Japan. Hodge mentions that no one has beaten him since that time.

Hodge mentions that he won 8 out of 10 boxing matches and wasn’t paid so he went into wrestling. Hodge says that wrestling is the harder sport between boxing. In boxing you box for three minutes and then rest for a minute. While when wrestling you wrestle for a straight nine minutes without a break.

Jack asks about the Assassin and wonders if it was different to wrestle someone with a mask. Hodge talks about being asked to put a mask on but said he didn’t want to because it impairs your vision. Hodge went to Mexico and liked the fans and everything but didn’t get along with the promoter. Hodge didn’t have a guarantee contract and wasn’t make much money.

Barbie asks Hodge about his thoughts on how junior heavyweight wrestling has changed. Hodge says that wrestling changes all over the place. Hodge goes on to talk about all the places that he went to several different areas.

OIB asks with Hodge was young today if he would go to MMA. Hodge says “without a doubt” he would go into MMA.

Brandon calls in and asks Hodge about his former partner Skandor Akbar. Hodge says that Akbar was a very strong man and says he was a great man. Hodge says he showed him a lot of things but not everything and that Akbar realized that when they wrestled each other.

Jack plugs the NWA Legends Fan Fest that will be taking place on August 5th thru the 8th in Charlotte, North Carolina. Hodge talks about the Briscoe Brothers and says they are still great friends. Hodge misses Jack Briscoe, a lot. Hodge says it is very difficult to wrestle in 90 minute matches.

Hodge says it has been a pleasure to be on the show and thanks the guys for having him on the show.

For more information on the NWA Legends Fanfest please go to www.nwalegends.com