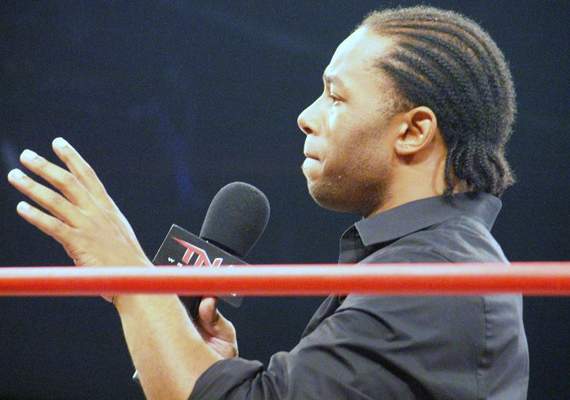 This past Tuesday Night, Former TNA Superstar Jay Lethal joined Alan Wojcik for Online World of Wrestling Radio, heard Live on the Wild Talk Radio Network (http://www.wildtalkradio.com) at 9pm ET, to discuss all the topics that people wanted to know in an Hour Long Interview. Some of the topics that were on the table included the following:

On the possibility of joining WWE

“I would say yes, Only because I can honestly say that anyone that is a pro wrestler in my generation you became a pro wrestler because of one reason and one reason only and thats because of WWE. ECW was big WCW was big but I think for my generation it was WWE that made you want to become a professional wrestler and why would you not want to get a chance to work for the company that made you love this business, so I would have to say yes.”

“The first conversation we had lasted for five minutes. It was a three way call because I did not believe that it was it was really the macho man, as the guy was trying to get me to believe it was really him. He told me he liked the stuff, he didnt see it on TV, but saw it on youtube, I didnt think I offended him, I think I annoyed him, as this fan was calling him, as I am a fan of Macho Man, its very weird to have a fan call you, just to talk.”

On the famous promo with Ric Flair on Impact

“After the segment, I got to the locker room first and I was so nervous that my hands were numb and I was waiting for Flair to come back through the curtain, cause I didnt know what he thought of it, I dont know if he thought it was good, before flair came back everyone was applauding because they liked it, I thought they just thought it was funny, but when Ric Flair came back through the curtain he had the biggest smile that I have ever seen in my life, I walked up to him and hugged and then I knew it was okay.”

On receiving the Phone Call about his release

“I was called by Head of Relations Terry Taylor while at a Baseball game. I should have seen it coming, as I hadnt been on TV in five months. It wasnt like hey Jay Lethal, you messed up, I honestly believe it was we have nothing for you. We kept you long enough with getting paid, its just now time to clean up and make some cuts.”

On being apart of TNA Destination X

Other topics include his return to Ring of Honor Wrestling, more on the conversation with Terry Taylor and the conversation they had when Terry Taylor was released from TNA Wrestling, How he got his Job in TNA Wrestling and more stories from his career. All of this was covered in this Hour Long Interview with Alan Wojcik on Online World of Wrestling Radio, which you can hear now by logging on to www.wildtalkradio.com and you can listen to some of the biggest names in Wrestling each week by listening to Online World of Wrestling Radio Tuesday Nights at 9pm ET LIVE on the Wild Talk Radio Network on www.wildtalkradio.com.

Related Items
← Previous Story AS I SEE IT: Tournament of Death Results
Next Story → OWW Radio is Declared “5150” Tuesday 9pm