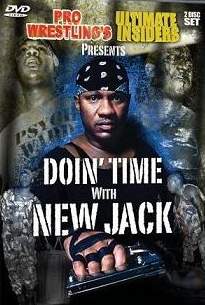 He is one of the most INFAMOUS figures in all of pro wrestling history. For over a decade now fans across the world have heard about the escapades of this extreme superstar: the BLOOD SHED, the STABBINGS, the BEATINGS, the LAID OUT opponents, the VENDETTAS, the WEAPONS, the CONTROVERSIES, the Â³RATSÂ² and more! Never short for words, the “Original Gangsta” has always got something to say about EVERYTHING and EVERYONE! But to find someone that is actually willing to sit down and interview him. . . That is a challenge!

Thankfully, Dr. Keith Lipinski (host of the renown Dr. Keith Lipinski Show on F4WOnline.com) has stepped up to the challenge as he sits down with New Jack to ask all of the questions fans have wanted to know and provide them with an UNSCRIPTED, UNCENSORED, UN FNÂ¹ BELIEVABLE look inside the life and times of the HARDCORE LEGEND! And if you donÂ¹t think this will lead to some uncomfortable moments . . . Think again!

And on this LIMITED EDITION special version, go beyond the interview and experience some of JackÂ¹s most extreme and controversial matches from XPW, including the legendary “Free Fall” match against Vic Grimes and follow Jack as he takes Keith into the heart of South Central Los Angeles for a day the
good doctor will never forget!

There is a reason that NEW JACK HAS BEEN BANNED FROM EVERY WRESTLING COMPANY HE HAS EVER WORKED FOR AND SOME HE HASNÂ¹T EVEN STEPPED FOOT IN! And, itÂ¹s all revealed when you spend your time…DOIN’ TIME WITH NEW JACK!

New Jack & Dr. Keith Go To South Central – over ninety minutes of footage as Dr. Keith and New Jack in a rental car, fighting LA Traffic, discussing life and times on the way to the wonderland known as South Central LA.

Trailers for some of Big Visions numerous Professional Wrestling titles

*** *** ***
“When it comes to unique personalities on wrestling radio shows, Dr. Keith may top the list. Add New Jack to the mix and you have the potential for a legendary DVD. A legendary adults-only DVD that should likely stay out of the hands of authorities, but a legendary DVD nonetheless.” – Bryan Alvarez, Figure 4 Weekly Newsletter