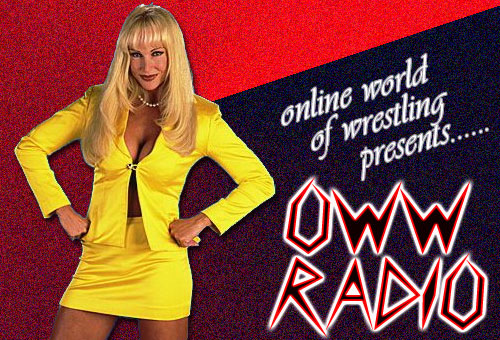 Debra McMichael Interview Notes:
– Debra said she was married to Steve Mongo McMichael for 13 years; her role was being an NFL wife. Debra put together a resume package of Steve McMichael and gave it to someone she knew at Turner Sports. WCW President Eric Bischoff saw it and hired Mongo
– Debra was only supposed to travel with Mongo as it was put in his WCW contract
– Debra has a background in Theatre
– Debra begged Bischoff to be put on television
– Debra got along with Nancy “Woman” Benoit. Debra commented that their on air ‘hatred’ worked well because Nancy was from the old school of wrestling and Debra was coming in from a different world
– Debra said she cried a lot when she heard about the Benoit Family Tragedy.
– Debra felt very guilty that she couldn’t speak out about her own experience as a victim of domestic abuse as she felt that it may have helped the situation which still bothers her to this day
– Debra is now a spokesperson for Domestic Abuse
– Debra described the events which led to her divorce from Steve McMichael
– Debra spoke fondly of Eddie Guerrero, Andrew “Test” Martin and Owen Hart
– Debra traveled with Val Venis and Test before she met Steve Austin
– When asked to share memories of Owen, Debra had to take a moment to answer as she was overcome with emotion. Debra described the events which led to Owen’s death
– Debra and Jeff Jarrett had to go straight in to character for a pre-match interview. Debra broke character and began crying in front of the cameras when she saw Owen laying on the stretcher
– Jeff went to the hospital and returned to the arena to grab Owen’s belongings in the locker room
– Debra spoke about WWF Women’s Title victory over Sable in the Evening Gown Match
– Debra talked about how women’s wrestling changed from her days hanging with Sensational Sherri in the WCW locker room to the Nitro Girls and the Attitude Era women’s wrestling
– Debra spoke of how her relationship with Stone Cold Steve Austin started over a hug. They tried to hide their relationship from their peers
– Debra called Steve Austin a great entertainer and a great wrestler and she’s glad that he’s doing well with his acting career
– Debra has not spoken to Jeff Jarrett or Dixie Carter, Debra is relying on the internet fans to support her quest to be a part of TNA
– When asked where she could see herself in TNA, Debra said she could see herself in a power role given her past experiences
– Debra spoke of her role in the Christopher Atkins film Gathering of Heroes: Legend of the Seven Swords
Interview Ends 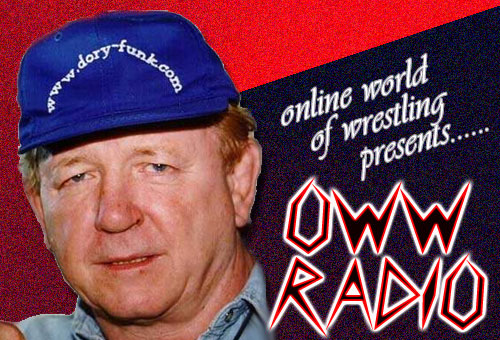 Dory Funk Jr. Interview Notes:
– Dory Jr. spoke of his father Dory Funk Sr.
– Dory’s father was by his side when he won his first NWA World Title from Gene Kiniski
– Dory said being inducted into the WWE Hall of Fame will be the highlight of his career
– Dory spoke about the Funking Conservatory, he mentioned that six of the Conservatory’s alumni will be wrestling at WretleMania; Jeff Hardy, Matt Hardy, Edge, Christian, Mickie James and Mark Henry
– Dory went on to say that the Funking Conservatory is the personal training school for All Japan Pro Wrestling in America, and that the Conservatory has a fine working relationship with WWE, TNA and other Japanese wrestling organizations
– Dory remembers traveling to Mid-Atlantic to team with his father and his brother Terry Funk to take part in a
six man tag match
– Dory spoke about his father being rather hard on him and brother Terry with their wrestling to the point where other wrestlers would defend Dory and Terry’s efforts
– Dory spoke about purchasing his father’s business partners share in the Amarillo territory with Terry
– Dory told a funny story about a young Million Dollar Man Ted Dibiase sitting at ring side during his father’s match (who played a notorious villain) and screaming at the angry crowd to leave his dad alone
– Dory spoke in detail of how the National Wrestling Alliance agreed on him to be NWA World Champion
– As World Champion, Dory wrestled 200 during his 4 and a half year reign
– Dory mentioned wrestling Jack Brisco 150 time, most of their matches together lasted an hour to 90 minutes
– Dory spoke about the honor of returning to Houston Texas for the Hall of Fame because it was in Texas where Dory wrestled Wahoo McDaniel and Johnny Valentine
– Wahoo McDaniel Jr. is training with the Funking’ Conservatory
– Dory spoke in detail of the controversy surrounding his loss of the NWA World Title to Harley Race in 1973
– Dory talked about how he went to wrestle for the WWF in 1986 to team with Terry
– Dory doesn’t believe that Vince McMahon was responsible for the death of the territories, he explained of the power of national television working against the territory system
– Dory spoke of the ‘other’ relative Jimmy Jack Funk who was brought in by the WWF to replace Terry who had left the federation
– Dory talked fondly of him and Terry being the first non Japanese wrestlers to be portrayed as babyfaces in Japan
– Dory spoke about wrestling Nick Bockwinkel at WCW Slamboree ’93
– Dory listed a large, honorable list of his favorite opponents
– Dory elaborated on the ‘Dory Funk Method’ – teachings that former student Steve Corino talked about during an OWW Radio past episode
– Dory shared a memory of training former student Andrew “Test” Martin
– Dory praised Paul Heyman calling him an innovator and commending him for doing his own production in ECW
– BANG TV is produced in a similar way to the old ECW
– Dory explained the situation about wanting Bret Hart to induct him into the WWE Hall of Fame and why he chose Bret
– Dory spoke about his close relationship with the Hart Family
– When Nick asked whether the WWE had been in contact with Dory about the possibility of taking part in the Chris Jericho vs. Legends match at WrestleMania XXV, Dory replied “that’s not for me to discuss”
Interview Ends

For more information email OWW Radio at [email protected] or visit the OWW Genesis Forum at http://www.onlineworldofwrestling.com/forums/ to to stay posted.  You can also call our toll free number at 1-866-543-6990

OWW Radio would like to thank the Producers for making this show possible. OWW Radio also wish to extend a big thanks to Dory Funk Jr. and Debra McMichael.