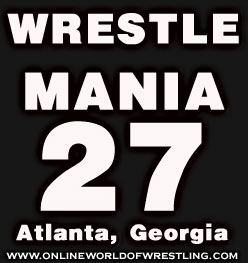 If you missed the Tuesday February 22nd edition of the Online World of Wrestling Radio with host Alan Wojcik and contributors from Wrestle Talk Radio/Otaku Talk Radio’s Spug & Mase plus Kevin K . Scott of Under the Ring, here are the highlights:

The program was opened with a review of Sunday’s WWE Elimination Chamber PPV, thoughts on whether putting John Cena vs. the Miz as RAW’s main event is going to increase buy rates/ticket sales, opinions on the reveal of the mysterious 2/21/11 man as the Undertaker who was quickly followed by the return of HHH, whether “Hacksaw” Jim Duggan is WWE Hall of Fame material and previewed some of the contributors choices for WrestleMania 27 matches.

Our 100% free to listeners “WrestleMania Memories” guest was former WWE creative team member David Lagana who is currently a consultant for Ring of Honor. This hour long interview took listeners through a typical WWE creative team meeting, what the atmosphere was like working with Vince McMahon, Stephanie McMahon-Levesque, Jim Cornette, Paul Heyman, Michael Hayes Ed Koskie & Brian Gewirtz, how it differed from a season in the writers room on the Friends TV program, transitioning from a writer’s assistant lead writer of Smackdown/ECW, leaving and moving onto ROH. Mr. Lagana helped preview Saturday’s ROH 9th Anniversary iPPV and talked about his new I Want Wrestling website which features new podcast options.

After a commercial break, the contributors broke down last Thursday’s TNA iMPACT, teased the taping in Fayetteville this Thursday and who would they like to see Jeff Hardy face at the upcoming Victory Road and Lockdown PPV.

Kevin’s TNA column is featured on “Under the Ring” which is featured on www.poughkeepsiejournal.com along with fellow OWW Radio contributor Phil Strum.

Alan announced on the next show will feature WWE Hall of Fame member and wrestling legend Jerry “the King” Lawler who will talk about his upcoming match teaming with Brian Christopher taking on Bill & Jamie Dundee on March 2nd. In addition Mr. Lawler will take your calls and emails on a whole variety of topics.

In addition to Mr. Lagana, Alan announced on March 8th former WWE/NWA/AWA World Tag Team champion Road Warrior Animal will be our featured guest to discuss the release of his autobiography “the Road Warriors: Danger, Death, and the Rush of Wrestling” to be released on March 1st.

Online World of Wrestling Radio is hosted by Alan Wojcik (http://alanwojcik.tripod.com for credentials) with contributors from across the wrestling world and the most important people, listeners like you joining in the chat room and on the air!! No opinions are too outlandish (just no profanity please.) The show airs Tuesday nights 9pm until we run out of stuff to talk about on the Wild Talk Radio network. The links to listen live can be found at www.owwradio.com and www.wildtalkradio.com .