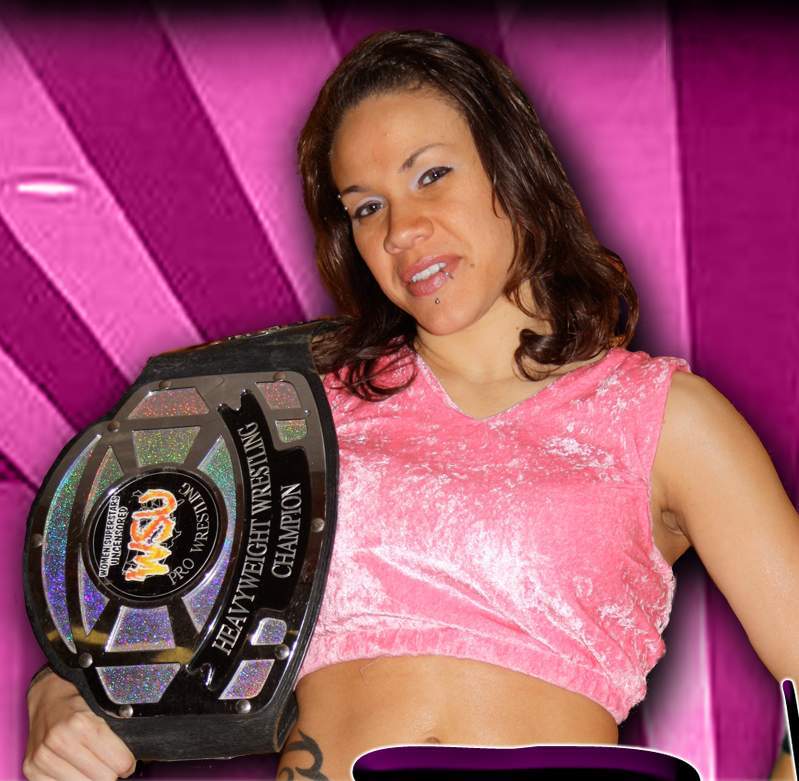 Mercedes Martinez vs Serena:
An Eye For An Eye & Hair For Hair?
Report by Jimmy Gentry of WSUWrestling.com

WSU World Champion Mercedes Martinez has been heralded by the top critics of the wrestling community, the fans & her fellow women wrestlers as the top womens wrestler today. From being called “the best champion in all of wrestling today” by WrestlingObserver.com’s Joe Babinsack to being the highest ranked independent wrestler on Pro Wrestling Illustrated’s Top 50 Women of Wrestling List, Mercedes Martinez is the barometer of womens wrestling in America today.


Ever since winning the WSU World Championship on 3/7/09, Martinez has been the hardest working female champion in all of wrestling. Other womens champions may only defend their titles once every 6 months in some cases, while some defend it once every 6 weeks, but in her near two year span as WSU World Champion, Mercedes Martinez has defended the championship 35 times against quality opposition. Martinez is averaging nearly 1.5 title defenses a month, and has defeated the likes of Mickie James, Awesome Kong, Nikki Roxx, Rain, Angel Orsini, Angelina Love, Portia Perez, Jazz & Alicia, among others.

While Mercedes Martinez has dominated the womens wrestling world, and has made history in doing so, from winning the longest ever match in womens wrestling history when she defeated Angel Orsini in a 70 minute Iron Woman match to competing in bull rope matches, cage matches & ladder matches, her long-time friend Serena Deeb was signed to the WWE. It is no secret that the WWE is the organization that is watched by the most amount of people & can make dreams come true for certain wrestlers. However, for womens wrestling, WSU is the place where women wrestlers try to perfect their craft and show why womens wrestling should be taken seriously. There are no pudding or blue-mat fetish matches here. WSU is the place to come to show that you can really go in between those four ropes.

Serena Deeb was excited to join the WWE. Aligning herself with “The Straight Edge Society”, Martinez’s friend that she used to travel the roads with changed. Believing an extreme life-style choice, the person that Martinez used to confide in seemed to disappear. However that all seemed to change, when Serena left the WWE in 2010. Serena, feeling free again, reached out to Mercedes Martinez, and the two rekindled their friendship.  Serena felt a huge burden off her back and now had her old friend Martinez to talk to and get advice from.

For this exclusive report, WSUWrestling.com found out behind-the-scenes information, that it was Mercedes Martinez who asked WSU to employ the services of Serena Deeb. Martinez, who has a great track record when it comes to suggesting talent for WSU, was listened to, and Serena was brought in for WSU’s first iPPV, “Breaking Barriers” on 11/6/10. WSU matchmakers pitted Traci Brooks vs Serena Deeb, a first time ever match. It would later be known that Martinez, while having a match with Jazz on the same show, was watching Serena’s WSU debut match on the monitors in the back to see if Serena had any ring rust from her WWE tenure.

Imagine Martinez’s reaction, as it was Martinez who put her neck on the line to get Serena Deeb into WSU, when she found out that Serena betrayed her. Privately, Martinez has wondered to sources if this was Serena’s plan all along, to rope Martinez in for a shot at the biggest prize in womens wrestling today, the WSU World Title.

On the “Breaking Barriers” event, Serena Deeb soundly defeated Traci Brooks after a spear. After the match, Serena denounced the fans, saying that she never needed them and they were a distraction. Everyone thought Serena was going to embrace the crowd and be a fan favorite, only for Serena to make it abundantly clear she wanted nothing to do with it. Serena spit in the face of her admirers and made it clear she was here for one reason – to become WSU World Champion.

When Martinez heard Serena talking about wanting to be WSU World Champion, Martinez was hurt. Here was her friend tricking her. Martinez would later go on to say that if Serena wanted a shot, all she had to do was ask. Instead Serena made a loud statement – a statement Martinez heard loud and clear.

On the “Martinez vs Rain II” DVD event, available at WSUVideo.com, Serena would win a number 1 contenders match against Jazz, Alicia & Portia Perez. Serena dominated the match and would pin Portia to earn the right to be number 1 contender due to defeating 3 previous number 1 contenders in one match.  Serena once again reiterated that it was her time and she wasn’t going to be wasting any of it.

In the main event of the “Martinez vs Rain II” DVD, Martinez would defeat Rain in an I Quit match. Martinez ended a near 2 year feud with Rain and retained her WSU World Title. However, a big celebration was not to be. The end of the night saw Serena sneak attack Mercedes Martinez and in act of “fe-masculating” her, Serena proceeded to cut off Martinez’s hair. Serena cut a huge lock of Martinez’s flowing hair and maniacally laughed, while clutching the hair to her chest. Even Jack Nicholson in “The Shining” was disturbed by Serena’s actions.

Serena then went into a tirade saying that she had Martinez’s hair and next she would take Martinez’s belt. Serena continued saying she was sick of hearing how Martinez was the greatest womens wrestler. Serena said she did not care about who Martinez beat and she couldn’t be the best unless she beat her.  When WSU tried to get Serena & Martinez under one roof for a press conference on 1/22/11 at WSU’s Final Chapter event, Serena refused, saying that the only time she will see Mercedes Martinez is when they are in the ring together. Serena has definitely gotten into Martinez’s head with her psychological and physical mind games and has even taken some of the hair off of Martinez’s hair to boot.

For this story, when approached Mercedes Martinez made it real clear:
” You tell Serena that I’m ready. Look at what I did to Angel Orsini in the Ladder match. And she’s someone I liked and respect. I no longer like Serena. I don’t respect Serena. What she did to me was pure bushleague. She could’ve had a title shot if she asked. Instead she wanted to rile up this Rican and now this match isn’t about me regaining my title via pinfall or submission. I don’t care if I get DQ’d or Counted-Out, I’m going to f&$# this b!tch up! She will be thinking, I wish I never came to WSU, and she will have that thought from her hospital bed on 3/5.”

On 3/5, Martinez will be 2 days short of holding the WSU World Championship for two years, as she won the championship on 3/7/09. However, her reign could end 2 days short, courtesy of a Serena spear. Serena is undefeated in WSU. But, as all WSU fans know, you don’t count Martinez out. Her track-record precedes her. A whopping 35 title defenses. The greatest womens wrestler in the world today. Greatness will be on full display on iPPV when Martinez & Serena do battle on 3/5 in the main event of WSU’s “Fourth Anniversary Show”. The Martinez era will either continue into year 3 or Serena will find true vindication & perhaps salvation – with the WSU World Championship.

You can view video packages of both these stars on our WSU Uncensored program, now available for free at http://www.inasectv.com/wsu


Don’t forget this match takes place on 3/5 at WSU’s Four Year Anniversary Show. Tickets are now on sale at WSUWrestling.com. You can also order this event on iPPV, where you can watch this match in your home & the entire event for a low price of $9.99 if you pre-order today. For details on how to watch on iPPV, check out: http://www.gofightlive.tv/Events/Fight/Wrestling/WSU__4th_Anniversary_Show/939