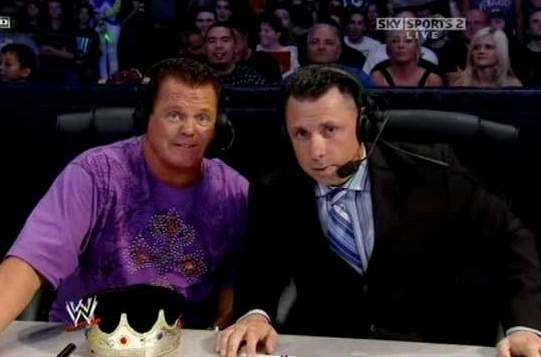 If you missed the Tuesday March 1st edition of the Online World of Wrestling Radio with host Alan Wojcik and contributors from Wrestle Talk Radio/Otaku Talk Radio’s Spug & Mase plus Phil Strum of Under the Ring, here are the highlights:

The program was opened with a review of last Thursday’s TNA iMPACT that saw some returns and matches set for 3/3/11, the arrival on 3/3 of a mysterious figure, the short term usage of former Jersey Shore cast member Angelina Pivarnivck and NY Jets star Bart Scott and why they thought Mr. Anderson should not be the #1 contender.

With ASW Florida’s Best of the Best event taking place this Saturday, we welcomed the current ASW Florida Tag Team champions the Uprising (“Essential” Eric Cooper & “Infamous” Eddie Taurus) to the program. The duo answered questions about their careers, working for the Florida promotions like Vintage, ACW, and ASW, being former rival turned partners and their heat with the “Emerald Emperor” Simon Sez. The audience was shocked when Simon Sez called in to ask the Uprising some intelligent questions. Log onto www.ASWFLorida.com for ticket and event information on Friday night’s event in Tampa and Saturday night’s event on Orlando.

Our 100% free to listeners “WrestleMania Memories” guest was WWE Hall of Famer member Jerry “the King” Lawler. In his brief time with us he addressed his WrestleMania 27 match with announcer Michael Cole, talked about trying to get Andy Kaufman in the Hall of Fame, would his legendary storyline with Kaufman in the 1980’s would get over with wrestling of 2011 and the proper way to draw heat from a crowd. Mr. Lawler will be teaming with his son Brian Christopher to take on Bill & Jamie Dundee TONIGHT in Evansville, IN. Find Coliseum Championship Wrestling on Facebook for event information.

As the topic shifted to the WWE, Spug spoke spoiler free about taking his family to the SmackDown! taping in Cleveland while the other contributors addressed the “firings” of Vickie Guerrero and Alex Riley, the signing of the former Mistico AKA Sin Cara, Dusty Rhodes coming to Cody’s aid on last week’s SmackDown!, the promo heavy Monday Night RAW and who they feel should sit in the announcer chairs on April 3rd.

Phil’s blog “Under the Ring” is featured on www.poughkeepsiejournal.com

Alan announced on the next show will  be former WWE/NWA/AWA World Tag Team champion Road Warrior Animal will be our featured guest to discuss the release of his autobiography “the Road Warriors: Danger, Death, and the Rush of Wrestling” available now in stores across America and websites like Amazon.

March 26th 2001 was the end of an era, the closing of the once great World Championship Wrestling. The promotion was purchased by the rival WWE. On our March 22nd show we will celebrate the legacy of WCW with two former members of their roster, former Monday Nitro announcer Scott Hudson  & former WCW superstar Marcus “Buff” Bagwell!

Related Items
← Previous Story Timeline: The History of ECW with Sabu
Next Story → Bruce Hart talks the release of his book