Home / Miscellaneous / Timeline: The History of ECW with Sabu

Timeline: The History of ECW with Sabu 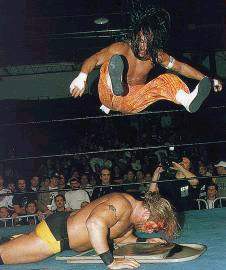 It is said of businesses and marriages…if it survives five years it’ll go on forever. ECW, in its original “Extreme” incarnation, lasted seven, had a groundbreaking effect on the wrestling business, changed how the majors presented their product, and amassed a die-hard army of fans.  . . . .  Then it was was gone.

Well, sure it hung aorund for a bit as an appendage of the WWE goliath. But everything that made ECW a significant entry in pro wrestling history. was gone after seven years. And in their new DVD series, “Timeline: The History of ECW,” producers Kayfabe Commentaries seek to pore over all the details for those years. The series is a spin-off of the critically acclaimed “Timeline: The History of WWE” which KC is also actively producing.

The debut episode went onsale today, and it spotlights one year, as all the “Timeline” DVDs do. The premiere edition features 1997 and it is told in great detail by Sabu. There are smiles. There is laughter. The is Krazy Glue. And there are genuine tears. Those tears were shed by one of the toughest men in the business, which adds to their gravity.

Sabu’s emotions rise to the surface when discussing Paul Heyman, the messiah-like leader of ECW, and his handling of one “accidental” indiscretion by Sabu. This, Sabu suggests, after many by Heyman. Oddly, Heyman remains revered by Sabu.

This is the magic of the “Timeline” series says Kayfabe Commentaries’ Sean Oliver. “How many second-hand accounts…in the form of books and newsletters, blogs, and whatnot…can we read about significant times in wrestling history?” Oliver asks. “It was always our contention that the stars of the WWE and now ECW would be the storytellers in our respective series. I don’t want the pundits to weigh in. So when you buy a ‘Timleline’ DVD, you will be guided through that specific year by someone who was there to see it, hear it, feel it, and wipe the damn blood off their body afterwards. In some cases, they wipe the tears too. The journey is real. And you’re there for it.”

The “Timeline WWE” series spans decades, and is therefore an open-ended project, with Kayfabe Commentaries releasing 4-6 editions per year. Since “Timeline ECW” will only cover seven years, Kayfabe Commentaries plans to release two per year. They have also partnered with RF Video for a special “Hardcore Pack” for each “Timeline ECW” release. This pack consists of the “Timeline” shoot-style interview, plus RF Video’s “Year In Review” discs for the corresponding years, allowing fans to have all the major matches and angles discussed in the interview.

“Timeline: The History of ECW – 1997 Told by Sabu” went on sale today at www.kayfabecommentaries.com

Related Items
← Previous Story AS I SEE IT: The Road Warriors book
Next Story → Download OWW Radio with Jerry Lawler!