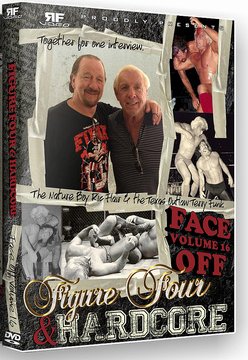 Editor’s note: This column originally appeared on http://slam.canoe.ca and was written by James De Medeiros.

When you think of some of the greatest rivalries in the history of professional wrestling, one of the first match-ups that jumps to mind is Ric Flair versus Terry Funk. Their 1989 rivalry epitomized all that is great about pro wrestling: Passionate performers, outstanding promos, amazing intensity, and an aura of authenticity that forced viewers to become emotionally invested.

When RF Video brought the same two men together for an off-the-cuff discussion about their relationship, rivalry, and careers, not to mention the history and future of the industry, that same passion shined through.

But their wrestler analysis didn’t end there. They also freely gave their thoughts on each other. Flair credited Funk as being one of the first guys who “introduced a little bit of entertainment into the seriousness of the business.” Funk responded saying “it was a work, but Ric never realized it when it came to those chops” adding that he’d inevitably end up with what he referred to as “blood blisters” after matches with Flair who Funk called “the best” worker.

Both men spoke about the importance of the NWA World Heavyweight title and detailed some of the challenges they faced as champions.

One of the more interesting challenges they mentioned was whenever they arrived in a territory, the organization would typically shoot every conceivable angle in the undercard, thereby making it difficult to have a standout main event on such a loaded show. Both men also agreed that one of their main goals as touring champions was to leave the territory, and the performers they wrestled, appear stronger than prior to their visit.

Funk and Flair also discussed what makes the current product seem so different. Arguably the two most compelling factors they mentioned concern characters in pro wrestling and the fans’ reactions. Flair said that he “couldn’t wait to get to the NWA convention every year” where Funk indicated that there was always “an extreme bunch of characters.” This lead Flair to state “all the characters are gone.”

Later in the interview, Funk identified what he believed to be the reason for the changes when he said “it’s the fans that have changed it. Not the wrestlers. Not the promoters.” Flair added that “the young guys now live off the Internet.” Without spoiling things, these old schoolers gave a somewhat surprising perspective on the dues paid by the current crop of young stars and gave their picks on who they believe could be the next big superstar.

The only real criticism of this interview is that some of the finer points of the storied rivalry were never touched upon, yet other more generic questions were asked. It would have been nice to hear their thoughts on the February 2000 version of their classic rivalry or even discussion of their pre-1989 matches.

For example, in discussing their 1989 rivalry they mentioned how WCW executives feared that TBS might pull their programming following Funk’s attempt at suffocating Flair with a plastic bag at Clash VIII. Even with such insights, what really made the interview special was that it seemed more like a casual conversation between two wrestling icons. They were relaxed, seemed to enjoy the discussion, and even took the time to squabble over two different types of Skoals tobacco products.

If you enjoy reliving some of the greatest moments in wrestling history, this volume of the RF Video Face Off series delivers.

James De Medeiros (@JamesDeMedeiros) is a communications professional who’s a former editor of a national health and fitness magazine, and is a writer of books, as well as magazine articles on a wide variety of topics.