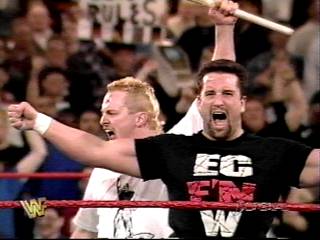 I am very excited about the Hard Justice event coming up. It’s going to be a great night for all old ECW fans. Say what you will about TNA having ECW wrestlers doing a TNA version of “One Night Stand”, but also remember this is something these guys need.

The ECW wrestlers need this because after One Night Stand 1, the WWE completely buried and tarnished the “ECW legacy”. Even the biggest WWE lover should be able to at least agree to that. All the original were put out one by one. Now, for the first time, all the ECW guys (except 1 important one) are free from WWE and this is their “last night”.

The current TNA contracted talent include Mick Foley, Raven, Rhino, Team 3D, Rob Van Dam and more. I expect most, if not all former ECW stars to come out for this. And personally, anyone who doesn’t may not care that ECW, the letters and promotion, were buried by WWE. Assuming everyone will be there, I have booked a card that I would like to share with you.

Actually, I’m only going to name the top four matches that I would promote. The rest I will invite you to listen to the Sunset Flip Wrestling Show next week to find out the rest of the card. I invite Paul Heyman, Dixie Carter, Tommy Dreamer, or whomever is going to be writing that show to read the following matches.

Before I start, there are a few things I should point. I am assuming Mick Foley will not want a regular one on one match. I also have ONE, numero uno, TNA wrestler on the show. In my opinion, TNA wrestling should get something out of this event and it beats 20+ “crusaders” that we had a couple of years ago. Of course, it is also assumed all the people I name actually accept an invitation. Finally, I had read that Tommy Dreamer has an injury so I will book him as if he is not wrestling.

Unfortunately Joey Styles is employed by WWE so he is the only person that has no chance of being part of this event. I would put Tommy Dreamer as an announcer along side either Cyrus or Joel Gertner.
Main Event

TNA Championship Match
Rob Van Dam © vs Abyss
Abyss is ranked number one for top contenders. Plus, out of all the major promotions right now (WWE, TNA, ROH) I think Abyss is one of the only people that would actually fit in the old ECW. He has been through one of the most brutal matches I have ever seen against Sabu. Barbed wire massacre anyone? I know the rumor is that they are trying to do Jerry Lynn against Rob Van Dam but I think this is much better because this is TNA’s small and minimal gain from the event.

Taz vs Sabu
This may be one of the most well known feuds in all of pro wrestling. Taz is a lock. He is already part of TNA wrestling. Of course my card can change if a certain wrestler is not able to perform in the ring, but since I haven’t heard anything I will book as if anyone can compete. I don’t believe Sabu is doing much right now and he has been in TNA wrestling before. I do not think it is a far fetch to expect him to be at this PPV.

6 Man All Out War
Team 3D and Brother Runt vs Mick Foley, Terry Funk and The Sandman
This will be the brawl of all brawls. On one side you have three of the most violent wrestlers of all time. There is the Hardcore Legend Mick Foley. One of the greatest of all time Terry Funk. Plus the barbaric Sandman. On the other side is one of the most recognized tag teams in pro wrestling Team 3D and of course their affiliation with Brother Runt is very well known. Picture it. ANYTHING GOES! You cannot tell me with a straight face that you would not be excited about this. Unless you are a type of wrestling fan that hates hardcore wrestling and buys a clothesline as a finisher in 2010. Or if you are a WWE fan and think that blood is “icky”.

This last match is probably going to shock everyone that is reading.
Beaulah vs Bill Alfonso
Ironically, two people that were non wrestlers, turned out to have one of the bloodiest, most violent brawls in all of pro wrestling. I would book them again in a match. Have it on a main stage PPV.

As I said earlier, the rest of the card will be revealed at this upcoming week’s Sunset Flip Wrestling Show. I will say this though, other stars I use include Shane Douglas, Raven, Jerry Lynn, Rhino, B.W.O., and Balls Mahoney.

You can listen to the Sunset Flip Wrestling Show at sunsetflipwrestling.podomatic.com and we are rapidly approaching episode 150. This week, I am very excited about pro wrestling because of things like the ECW event, Lucha Libre series, and much more that has nothing to do with WWE.

Related Items
← Previous Story The True Story of Memphis Wrasslin’
Next Story → AS I SEE IT: Promoting Wrestling 101