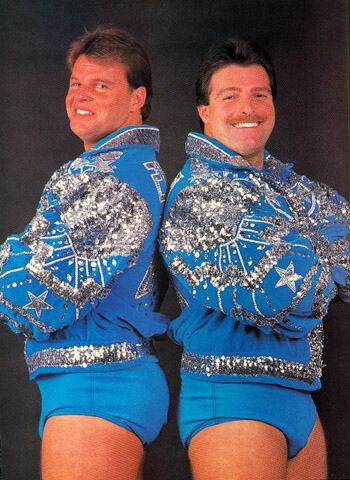 Jack, OIB and Barbie Richards are joined by Raymond Rougeau for this edition of In Your Head. Full audio available at http://www.InYourHeadOnline.com !!

Raymond says that he is no longer involved in the wrestling business. Raymond mentions that he was a French commentator for WWE from 1989 until 2002. Raymond is now a city councilmen for where he lives. Raymond loved the business but was tired of the traveling. He would only be home five times a month. While he was a commentator he would record shows at the WWE Headquarters and would have two weeks off at a time.

Jack brings up Ron Garvin and Raymond says that they hang out quite often and that Garvin stays at his home sometimes.

Raymond knew at a young age that he wanted to be a wrestler since his family always wrestled. Raymond was asked when he was 13 and was told by the age of 16 he would be a full fledged wrestler, and he was. His father smartened him up the first day he began to train to wrestle. Raymond also says that at the age of 16 he was lifting 300lbs.

A caller named Adam asks what was Raymond’s favorite and least favorite city to work in. Raymond loved working in Montreal. He didn’t have a least favorite city since they were treated very well. He does mention a Japanese tour that he went on when he was 20 that was a bad experience. He had a difficult translator to work with.

Raymond says that the best time of his career was when he and his brother Jacque turned heel in the WWF. He likes the fact that being a heel means more creativity to what you can do. Raymond really liked the theme music for their tag team. Jimmy Hart wrote the English version while himself and his brother recorded the French version.

Raymond talks about being baby faces at first for WWF. However, since they were getting mixed reactions they were switched to heels. Raymond says that 30% hated them, 10% respected their talent and 60% cheered them. Raymond recalls a meeting with Vince McMahon where Vince suggested they turned heel and it was funny since he and Jacque had just talked about it a couple of days earlier! Raymond wasn’t quite sure that Vince was right that they would be hated after saying they loved America.

Raymond says that Vince McMahon is a “super nice guy”. He only has nice things to say about Vince McMahon. Raymond didn’t get time to talk to Vince much during his wrestling days but when he became a commentator he spent some time with Vince. Raymond mentions that WCW offered him a large contract but simply declined it because he is a loyal man. Raymond met with Vince McMahon at Survivor Series 1994 and said that he was 100% WWF.

Raymond puts Pat Patterson over as being a creative genius. Raymond also talks about wrestling with Patterson in the Quebec area after Patterson turned on him to break up their tag team. Raymond worked one hour matches with Patterson and learned a lot from Patterson.

A caller named Dream asks about a story where Dynamite Kid claims to be sucker punched by Raymond and Jacque. Raymond has a lot of respect for Dynamite Kid. Raymond talks about Dynamite sucker punching Jacque a few days earlier. Raymond talks about Curt Hennig ribbing both sides saying that the other would be throwing them under the bus to management. Raymond recalls Dynamite slapping Jacques head and punched Jacques in the face. Raymond was hurt at the time and told Jacques that they needed to get back at Dynamite. Jacques stepped up and wanted to be the guy to get back at him. Raymond says that Dino Bravo warned Dynamite Kid that the Rougeau’s weren’t going to let it end there. Raymond recalls Vine McMahon wanting to have a meeting with them. So, they knew they needed to get their payback before the meeting since they could get fired if they did anything afterward. Raymond says that Jacques hit Dynamite and Dynamite got some of his teeth knocked out. Raymond also says that their weren’t any brass knuckles involved.

Raymond says his favorite tag team to wrestle was the Garvin Brothers. He also notes that they had a good run with the Hart Foundation for seven months when they first arrived in the WWF. Raymond also had fun wrestling with the Rockers. Raymond puts over Shawn Michaels and Bret Hart as great talents.

Jack asks about Raymond punching Daivari at a fan fest. Raymond was commentating his match live at the fan fest. After the match, Daivari started to poke fun at him because he lost and Raymond blocked a punch and punched him back.

Raymond and Jacque came up with their double team finishing move. Raymond enjoys the radio show and says he will be listening to the show. They also joke about the Iron Sheik interview that happened awhile back.

Raymond goes into a story about Iron Sheik and seeing him at a Fan Fest in New Jersey. Raymond says that Sheik began to cut a promo about the Dynamite Kid situation.

Raymond says that TNA has not contacted him to do commentating for them. Raymond sometimes watches wrestling. He doesn’t get WWE were he currently lives, but does get TNA. Raymond doesn’t like the fact that TNA uses a lot of former WWE wrestlers. He doesn’t like that they rehash the old stuff. Raymond agrees that they need to develop their own stars.

A caller named Carl asks about Raymond’s memories of Owen Hart. Raymond says that Owen is a great guy and mentions that he had a boxing match with Owen Hart in 1996.

Raymond reveals that he burnt his blue wrestling jacket in his backyard. He also burnt the cape he had.

Jack thanks Raymond for coming on and Raymond says he will be tuning into the show in the future!