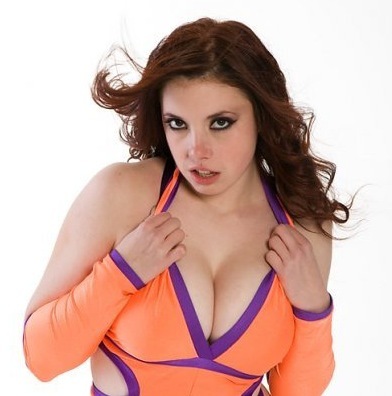 Her appearing on TNA Gut Check: “It was all real – that was my real reaction, and nobody told me about Joey Ryan either [who hopped the railing and demanded another Gut Check after losing the previous one]… I was really mad at him because I didn’t know that was going to happen. He was ruining my moment – I didn’t know if I was going to be signed and this could be my last moment on television.”

Not getting any direction on how to develop for a potential call-up to TV: “I was told one thing, then I was told something else and something else, and Taryn Terrell was signed and I was like, ‘well, I’m here, I could have been the ref.’ At the time it was very discouraging… I didn’t know if I had to change my look or change the way I wrestled.”

Her weight gain: “Health is more important. I would rather be beautiful and healthy. I was 108 pounds and for someone who’s 5’7?, it probably wasn’t healthy.”

Same-sex romantic storyline with Heidi Lovelace in OVW: “If it’s controversial, I want in. Bette Davis is my role model and would take the most controversial roles in Hollywood that they would not want women to play. She would play them and won Oscars for them. That’s what I want to do, so it wasn’t weird for me at all playing a same-sex love storyline. Plus, we were on the Christian Network and sponsored by Papa John’s which is a family company. It was very interesting to see how far we could play it and how much we could do.”

How her heel the character in OVW came about: “The character I portray now is emulating a girl who bullied me from elementary school. I take her and remember how I felt when she cut my hair, put gum on my feet and when I got jumped. When I decided to take this Taeler Hendrix character and run with her I drew a lot of inspiration from things like Pretty Little Liars.”