Former WWE star Marc Mero shares his thoughts on his ex-wife Sable, the WWE, and more 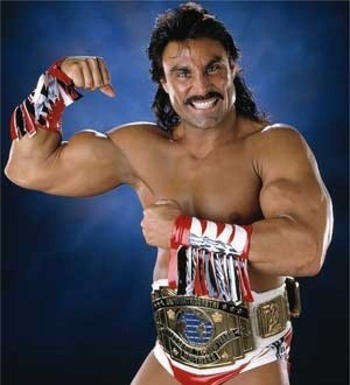 Former WCW TV Champion and WWF Intercontinental Champion, Marc Mero recently joined Steve and the Scum on WGD Weekly for a thirty minute interview that can be heard in its entirety here:

The former, Johnny B. Badd speaks on a wide range of topics including his ex-wife, Sable, the Honky Tonk Man’s short run in WCW, Triple H, Arn Anderson, DDP, and much more. Highlights of Mero’s chat with Steve and the Scum include him discussing:

His thoughts on his ex-wife Sable becoming a star when he was injured and working on screen with her: “…I had blown out my knee and needed total reconstruction on my knee, I was out for eight months and in that time off was when my ex-wife became very popular, you know going out there and selling merchandise and becoming a diva and so on. Then they came up with the storyline of me being jealous of her and I’m thinking ‘wow, what a great idea.’ I know a lot of wrestlers were saying, ‘That buried you, when a girl beats you up or something your never considered anything again,’ but, you know what, all that didn’t matter. They were backing up the Brinks truck to our house, so you really look at what is really important, its entertainment, its being an actor, and I’m being paid very well for it, and now, she is getting paid very well for it. So, all in all, you look back…I have no regrets…it all worked for us, like I said, there was
nothing I would change…

Leaving the WWF, the Sable lawsuit, and their relationship: “…Unfortunately, the ending of the WWF didn’t go well. My ex-wife had some problems with the company and their was a lawsuit. I had three years left on a guaranteed contract…and I just decided to walk away, it just wasn’t fun any more. It was just a sad part of our lives…so, we left the wrestling arena and obviously the lawsuit was settled out of court between my ex wife and the WWF…its no secret, we got divorced in 2004 and she went on to marry Brock and I married an incredible woman that I have been married to for four years. So, we both went separate ways, but you know something that is amazing, we have never said a bad word about each other. I have nothing bad to say, you think about the good memories you had together. I have never been happier than I am now with my life…”

Working with the Honky Tonk Man during his abbreviated stay in WCW: “…When the Honky Tonk Man came into the company; it was exciting because he was a really well known name. It was really cool to be wrestling against the Honky Tonk Man. I think it was in Detroit I wrestled against him and it was a short lived stay that he had there. From what I understand, he had some disagreements with the company and their direction…so our match was changed a couple of times, what it was going to be like and what it was supposed to be like and whatever…but, whatever, he was a good guy. I liked Wayne…it wasn’t the kind of matches I was used to having…not as physical…but that worked for him. I only wish I was able to do that as good as he did, I wouldn’t have had to have about ten surgeries by now, you know…”

Arn Anderson helping him in WCW and Arn’s great sense of humor: “…He was so much fun to work with, I really liked Arn, not only as a great wrestler, he was unbelievable, but as a person, too…He had one of the best senses of humor. I always enjoyed the locker room when Arn was around…he is another guy that I learned a lot from and really helped me out in the ring…Arn was definitely one that really reached out and helped me with some ideas…I always have great memories of Arn…I have one really funny memory of Arn…a ‘working punch’ is when you can nail a guy, but it doesn’t even hurt him, but it looks like you took his head off, and I remember the referee coming over to me…he said, and now this is during the match, ‘Arn said punch him in the face as hard as you can’…I said, ‘why would I want to do that…ask him why he wants me to punch him in the face as hard as I can?’ He comes back and he goes, ‘because he says you’re working punch is killing him’…so, Arn had a great sense of humor even when you were wrestling him…”

Battling over the Intercontinental Title and in his early days in WCW with Triple H: “…Triple H was and is a talented wrestler, he was like a student of the game, you know.  I really enjoyed working with him. We wrestled each other hundreds of times, because obviously we would tour for quite a while on the road and we would wrestle each other every night, and not only that, we wrestled in WCW several times. I believe his first belt he ever won was when he beat me for the Intercontinental title. You’ve seen what he has done in his career and the amazing heights he has risen to…but he was really good to work with, very similar to “Stone Cold” in their work ethic…they can make guys that weren’t as talented, I wasn’t as talented as a Triple H or a Stone Cold, and they made our matches look fantastic…my hat is off to that guy…”

His program in WCW and longtime friendship with “Diamond” Dallas Page: “…It is no secret that Dallas and I are still great friends today. He is by far one of the hardest working people I have ever met, bar none. Just an incredible work ethic…When we were in our program together…we would go down to the Power Plant and work on our matches and moves…then all of a sudden, I get a call at like three o’clock in the morning…I’m saying ‘oh my gosh, who is calling me at this hour?’ Of course, I pick up my phone and its Dallas and he goes, ‘hey, brother, I wanna run by a spot,’ and I am going, ‘What, Dallas, its three o’clock in the morning.’ He goes, ‘I know, but I couldn’t sleep, I had to tell you this spot I want to do’… I’m thinking, ‘Are you crazy?’ But, that was his work ethic and I will tell you something, if you are ever going to bet on someone, bet on DDP, the guy…he has got that never die attitude and he never gives up…I just have such admiration for Dallas, not only as a friend, but just as a wrestler, as a human being, an entrepreneur…believe me, DDP Yoga is going to be a household word someday, you watch…”

In addition to these items, Mero also spoke at length with WGD Weekly about his transition from boxing to wrestling, Dusty Rhodes approaching him with the Johnny B. Badd gimmick, starting a wrestling career at age 30, working in WCW and WWF with Steve Austin, winning his first title and working with Steven Regal, receiving one of the first guaranteed contracts in WWF history and how Sable wound up becoming an on screen talent, winning the Intercontinental Title in a tournament by defeating, Austin, Faarooq, and Owen Hart, his various injuries, Vince McMahon liking the Johnny B. Badd character, the creative process behind the “Wildman” gimmick, his matches with “Toughman” competitor, Butterbean and the “Brawl for All” series on Raw, walking away from the WWF, returning as Johnny B. Badd in TNA, his current work around the world to raise awareness against bullying and much more

WGD Weekly with Steve and the Scum presents new material every week, with the first episode of Season Two set to debut the first week of January. Each week, they sit down with a different figure from the “glory days” of wrestling. All of the past shows, as well as their new ones when they debut are available at WGD Weekly’s Facebook page that can be viewed here https://www.facebook.com/WGDWeekly. All of their shows are also available on their YouTube channel and iTunes.