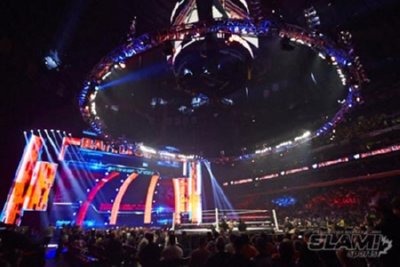 Editor’s note: This column originally appeared on http://slam.canoe.ca and was written by Dave Hillhouse.

BUFFALO, NY — Ah, Buffalo …you know how to take a ribbing in stride. Every single time the WWE rolls into town, there will be jokes about your football team, your chicken wings, and your weather. Tonight, you are treated to a brand, spanking-new pay-per-view with Battleground, so the WWE must like you. They must really, really like you. So why were you chanting “bull—-” at the end of the show?

The First Niagara Centre was hopping on Sunday night, right from the get-go. Despite this writer’s personal aversion to opening shows with World Heavyweight Championship matches, the crowd was eating up Rob Van Dam and Alberto del Rio, demanding tables (and getting everything but) and laying out the “This is Awesome” chant on the first match of the card. Patience, people, patience.

Incidentally, the garbage can that Del Rio pulled out was definitely not from Buffalo, as they have been mandated to use giant plastic bins for their curbside garbage. That actually would have been more fun, because I think Van Dam would fit inside one of them.

Maybe all of that early gusto took the wind out of the crowd’s sails too quickly, because they were restless during the Khali/Santino vs. Swagger/Cesaro match, then downright listless for the Intercontinental Title match. Apathy and championships are never a good combination.

Surprisingly, it was the Divas match that brought the crowd back to life. AJ usually receives a little more babyface reaction than heel, and that held true on Sunday night. The crowd’s interest grew during the match, as if their appreciation grew the more they realized they were being granted a Divas match of more than five minutes in length.

Speaking of heels with the face reaction, The Shield is usually treated well as they have that “cool” factor about them — but not in Buffalo. The crowd was so solidly behind the Rhodes’ family that The Shield were being booed and jeered, and every singly Rhodes was treated like a conquering hero. When they prevailed, I honestly can’t remember a live moment where something that was seemingly so obvious was nonetheless received with such enthusiasm. There’s no way to have known this, but it should have been the closing match of the night, given the reaction from the crowd.

After that high, there must be a low, and the low-point was definitely the short-lived “Fandango-ing” started by a handful of bored fans. It gathered enough momentum to distract from the Bray Wyatt/Kofi Kingston match, but died down early enough for everyone to enjoy Wyatt’s rather mind-boggling crawling spectacle.

CM Punk, on the other hand, has the crowd in the palm of his hand, and has the crowd so giddy that they start more than one “CM Punk” chant that builds up too much speed for its own good, dying in a cacophony of people trying to keep up with it.

After the Punk victory, as pointed out in Matthew Asher’s report [Battle may be over but WWE Battleground still leaves unresolved issues], the TitanTron lost power, as did all of the monitors surrounding ringside. The arena still had power, and the house mic still worked, but the PPV feed was clearly gone as all action ground to a halt. After a few moments of restlessness, manifested in a “We Want Power” chant, Brad Maddox emerged on the ramp to tell people that we would have power in three minutes.

Six minutes later (which isn’t bad, really), Randy Orton‘s music hit and we were back on. Not that the WWE could have done anything about the power failure, but the loss of momentum was tangible after the wait. If they had mics, and the lights were on full for the ring, one wonders why they didn’t send someone down to the ring to at least keep talking the crowd into a frenzy. Maddox could have done fine, or Vickie. Come to think of it, Vickie was seen laughing earlier on about how this could be the night that Maddox gets blamed for blowing the whole show. Is it possible that Guerrero pulled the plug?

Well, after the show, Maddox was quoted as saying “I was like, ahh, Vickie Guerrero, she never stops, she always has something up her sleeve. She just couldn’t let me have this one in a landslide, huh? I thought she had a hand in it. Most definitely, she had a hand in it.”

Other than those minor points, it’s exactly what was said after the PPV.

Anyway, with the crowd already a little antsy, the no-finish didn’t make them pine for the next show, it just got them ornery. As soon as Big Show‘s music finished, and once the PPV feed was gone, that’s when the “bull—-” chant started. As always, the WWE tries hard to send people home happy, so having Daniel Bryan knock Orton down with a driving knee gave the fans something to cheer about, but it was a grumbling mass that exited to drown their sorrows in Crisco Oil wings, hope for a better, more decisive outcome from the next Bills game, and enjoy the fine weather before the cold sets in.

Seeing as the WWE returns to Buffalo in January, that cold will have arrived, and you can bet the fans will pack the First Niagara Centre again … if only to warm up for a few hours.

Related Itemsbattlegroundwwe
← Previous Story WWE.com presents: The evolution of the steel cage
Next Story → CLASSIC VIDEO: WWE’s “Brawl to End It All” on July 23, 1984