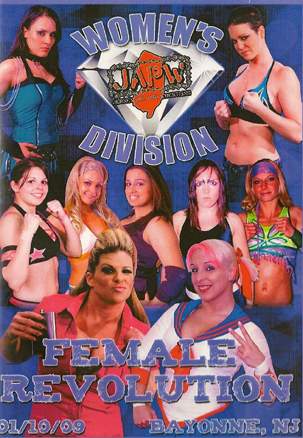 Jersey All-Pro Wrestling has been around for a very long time, and have established themselves as one of the top independent wrestling promotions in the United States. I have not gotten the opportunity to watch many of their DVD’s but I am usually entertained just by reading reports on their shows. On January 10th of 2009, JAPW became the latest company to take advantage of the growing demand for serious women’s pro-wrestling. In the shadows of promotions like SHIMMER and ChickFight, the JAPW Women’s Division presented its first ever event in Bayonne, New Jersey called “Female Revolution,” featuring some of the most well known women’s wrestlers in the world!

INTRODUCTIONS: The lead announcer was joined by Steve “Monsta” Mack for the introductions of the JAPW Women’s division roster. The microphone was broken so it was hard to hear what they were saying during the introductions. He introduced Cheerleader Melissa, who looked grumpy with her arms crossed in heel mode. Then he introduced Sara Del Rey, who also looked grumpy in a missing link sort of way. Next up was Sassy Stephie, frickin’ awesome Portia Perez, and the tough-as-nails LuFisto. Then we were introduced to newcomer Marie Lollipop, “Girl Dynamite” Jennifer Blake, Daizee Haze, “The Portuguese Princess” Ariel, and “TNA Knockout” Nikki Roxx. Finally Mack introduced the headliner, “the reason why I watch TNA” ODB! Suddenly out of nowhere ODB shoved LuFisto and there was a brief scuffle to hype the main event between ODB and LuFisto – which was changed to a Last Woman Standing Match..

“Ninja Master” Portia Perez vs. “Girl Dynamite” Jennifer Blake: Portia got the ball rolling backstage, telling Monsta Mack that Jennifer Blake wouldn’t have even made it to Canada if she (Perez) didn’t pave the way for her. That’s a little bit true. It was a short match that saw Blake get some shots in, but Perez pulled a fast one by pinning Blake with her feet up on the ropes for leverage!

Cheerleader Melissa vs. Nikki Roxx: One commentator actually said it was a battle of TNA Knockouts, but the other guy corrected him saying Melissa only had a couple dark matches. I know, I know. Kayfabe. This match could main event any independent show in the world, and put the male wrestlers to shame in the process. Melissa softened up Roxx’s back and basically dominated the match before winning with the Kudoh Driver. Great match, but I would expect more from them if they were higher on the card.

Roxxie Cotton vs. Sassy Stephanie: My crush on Roxxie Cotton is officially out of control. Yet she continues to refuse to email me. Do I look stalkerish to you? Oh well, I will continue to admire her from afar. Stephanie is a bit green, and her ring gear is too loud. Roxxie made Sassy Stephie tap out with the Crippler Crossface and took another little piece of my heart.

Daizee Haze vs. Sara Del Rey : Sara Del Rey has officially gone insane, wearing a green Barack Obama t-shirt. She reminds me a little bit of the Missing Link, but maybe Bull Nakano is a more appropriate comparison. Her opponent was fellow SHIMMER athlete Daizee Haze. Announcer Steve Mack said it best when he stated that Del Rey was “like a woman possessed.” Del Rey was ruthless with her offense, and actually survived a Heart-punch from the Haze (possibly because she has no heart?). Del Rey got mad and stretched the Haze into a pretzel until she tapped out from the pain!

“The Portuguese Princess” Ariel vs. Raisha Saed: I don’t know who Raisha Saed is but she has beautiful eyes. Yes, I just kayfabed you – deal with it! They are hyping this as Ariel’s return to the area. Not sure where she has been but she’s looking a little more grown up since I last saw her in SHIMMER. Saed botched a power-bomb, and nearly dropped Ariel on her head, but saved her from a broken neck. Saed followed up with the Jihad (Camel Clutch) for the win….. After the match, Saed announced that Awesome Kong will be at the next JAPW Women’s Division event!

Annie Social vs. Marie Lollipop: Annie Social must be a not-so-distant relative of the Adams family. Her opponent was French Canadian, Mary Lollipop, making her American debut. Social must have been late for the show cause she wasn’t out there for introductions and this match should have been up first. Thankfully, Social made short work of Lollipop. She sucks anyway. Get it?

Last Woman Standing – ODB vs. LuFisto: ODB isn’t really a good wrestler, but she’s a great entertainer, and definitely the star of this show. I would much rather have seen LuFisto vs. Cheerleader Melissa or Sara Del Rey. LuFisto looks like Japanese anime come to life – VIOLENT anime. Monsta Mack stumbled over his words, but actually called LuFisto a “rabid wolverine.” I left the room for thirty seconds and when I came back Lufisto was covered in blood! The fight spilled out of the ring and they started dumping beer all over each other. A few minutes later they made their way up to the stage, where LuFisto threatened to Power-bomb (or Pile-drive) ODB off the stage. ODB reversed it and Choke-bombed LuFisto off the stage through a table for the 10-count! Pretty crazy for a girl who had to retire for a year due to a back injury….

You can purchas this DVD, and other JAPW DVD’s, at www.JAPW.net