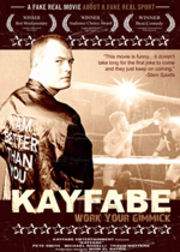 The movie KAYFABE is the hilarious look at the concept of “kayfabe” in the professional wrestling business. The script is just cheesy enough to be extremely funny, and has a lot of insider-type humor that only wrestling fans would understand. The film is what movie buffs call a mockumentary, setting out to poke fun the theory behind kayfabe as it fights for its life in modern day sports entertainment. Everything about this movie is fake, except for the kayfabe itself – which is appropriately ironic in my opinion. The script is actually quite clever, and the characters have been developed by someone who has obviously been around a pro-wrestling locker room or two.

The movie focuses on an independent wrestling promotion called TCICWF, run by a stubborn old fart of a promoter, who is set in his ways and is in denial over the dark cloud hanging over his wrestling company. His crew of wrestlers are on board with him through good times and bad. Throughout the production, I was trying to figure out if the wrestlers in the movie were actually wrestlers, or if they were just actors pretending to be wrestlers. I think most of them were professionals, but I had just never heard of them. Here is some insight on the characters.

Al Thompson (played by Travis Watters): He’s a stubborn old promoter with years of experience, living out the rest of his life in the wrestling business without updating his attitude or behavior. He is in charge of the show, but has relegated much of his duties to one of the more responsible members of the roster.

Rocket Randy Tyler (played by Pete Smith): He is the top heel, but behind the scenes he is the glue that keeps the TCICWF together. Without the Rocket, the TCICWF would have crashed and burned a long time ago. When the grouchy old promoter goes AWOL, the Rocket steps forward and controls the show like a true professional. In the ring, Tyler is blessed with all the charisma of a young Lance Storm – but still manages to get over big time with the fans as a bad guy.

Steve Justice (played by Michael Roselli): The promotion’s top babyface, a position which brings with it the enormous burden of a gigantic ego. He more often than not mistakes what’s good for business with what is good for himself and himself only. He’s more concerned about winning than putting on a good show for the fans that makes sense. He has been to “the show” (the term they use for WWE) and is confident that he will return one day. His main rival, heel Randy Tyler, also happens to be the booker, so Tyler has to play diplomat with Justice backstage while stroking his ego gently.

Robert Lafontaine (played by Scott Schnurr): The muscle-bound homo-erotic ambiguously-gay oily guy who walks around the locker room naked making everybody uncomfortable and doesn’t even know it. He gets himself into “positions” during the match and begs his opponent not to break the hold because it’s “so hot.” Everybody thinks he is surely gay, until the final scene when his super hot fiancé is introduced to a stunned dressing room.

The Rookie (played by Kurt Feiertag): Every locker room has its brash rookie, who will tell you “I’m not cocky, I’m just confident.” Well this guy is very confident. So confident, he finds a way to date the promoters beautiful daughter. He must have read Triple H‘s book about how to get to the main event in less than six months. The rookie becomes the target of hazing and ribs, as his fellow wrestlers initiate him into the business.

Tomahawk Jacques (played by Michael Jonsson): You will find a guy like this on every independent show. He is saddled with about a dozen different gimmicks, but he couldn’t get himself over with the fans if his life depended on it. Jacques goes out and pulls every trick out of his hat, but you can literally hear a pin drop as the fans fail to react to anything he does. You really begin to feel bad for the guy, until he finally comes out of his shell at the end of the movie.

Todd Powers (played by Ben Nelson): Todd Powers is a pure Christian, but also has a passion for wrestling. He is deeply conflicted about being apart of such an impure form of entertainment. I’m sure this is something many Christian wrestlers have to deal with in todays landscape. He was particularly confused after a disturbing match with ambiguously gay Robert Lafontaine involving a little bit of innocent dry-humping.

Lucky Lupichuk (played by Mike Willis): Lucky is the hardcore wannabe from every roster around the country. He cuts himself in every match, and bleeds all over the building. He’s oblivious to the damage he is doing to himself and represents the bloodthirsty sector of the pro-wrestling business. He never wins, but he is the most content member of the TCICWF roster. Here’s a funny clip from the movie to help demonstrate.

Cam Cunningham (played by Robert Parent): Poor little Cam Cunningham is a delirious trainee working on the ring crew dreaming of being equal to his hero, Rocket Randy Tyler. Despite his best intentions, he can never seem to do anything right. He repeatedly forgets to bring the ring bell to the events, and has to improvise with something he finds around the arena. He actually tried to impress his mentor by doing an unscripted run-in and got the crap beat out of his by both wrestlers. Some people just aren’t cut out for pro-wrestling, but they keep them around for the humor.

Jimmy Swagger (played by Michael Raven): He’s the geeky ring announcer with a cool name and is probably the biggest mark of them all. He marks out, especially at the idea of midgets coming to perform at the show. He is the only one to call out his broadcast partner when he says things that don’t make sense.

Marco Pain (played by Travis Watters): The heavily concussed hippie color commentator with an endless supply of whacky clichés. The twist here is that this self-proclaimed ladies’ man has more passion for the wrestling business than anybody else on the roster, and is quick to step forward with a passionate speech when the rocker room begins to crumble.

There are a few other minor characters but I will let you discover them for yourself. What a humorous look into the world of professional wrestling. We’re bombarded with constant negativity with premature deaths, steroid and drug abuse, and things of that nature. It’s time we start looking at the fun side of wrestling again. If you get a chance to check out KAYFABE, I encourage you to do so. If you want to learn more you can go to http://www.kayfabeentertainment.com

Kayfabe is to wrestling, what Spinal Tap is to music. Brilliant.