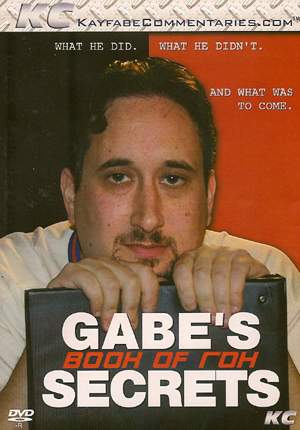 Online World of Wrestling DVD Review
Gabe’s Book of ROH Secrets
What He Did. What He Didn’t.
Available at www.KayfabeCommentaries.com
Reviewed By: Brad Dykens

If you’re a huge drooling mark for Ring of Honor like me, receiving the latest DVD release from Kayfabe Commentaries in the mail is a joy that cannot be compared to anything else. For some people, Gabe Sapolsky has one of the greatest minds for professional wrestling since Paul Heyman turned ECW into a cult phenomenon. Sapolsky has been called this generation’s Heyman, but he is not likely to sell-out like Heyman did any time soon. Gabe’s work as ROH booker was not without its controversy. Some people saw ROH as the final link between old school and new school wrestling, but there were many wrestling purists who felt ROH was just another nail in the coffin that housed professional wrestling’s rotting corpse. The fact of the matter is that Ring of Honor was the first promotion since ECW to develop a successful business strategy and implemented it well enough to expand into uncharted territory. ECW hemorrhaged money for most of its existence, while ROH was at least breaking even. With Gabe at the helm, ROH went from running monthly shows in Philadelphia, to running shows in over a dozen markets including events England, Japan, and Canada. Ring of Honor made its Pay-Per-View debut with Gabe behind the steering wheel. The dream, however, came to a crashing halt in the fall of 2008 when the wrestling world learned that their booking messiah had been suddenly and unceremoniously fired from his position in the ROH organization after a six and a half year stint.

Gabe’s Book of ROH Secret’s has been released to the public by Sean Oliver and the crew at Kayfabe Commentaries.com, which has previously released a Guest Booker DVD featuring Gabe Sapolsky. For those of you who are wondering; yes, there actually IS a book – and it has a totally awesome SLAYER sticker on it (among others). It is more like a binder of notes. This comes as no surprise as any good booker needs to find a way to organize a huge roster of talent into four monthly events. It’s only a smart to make plans months in advance, so the concept of this DVD was for Gabe to expose his plans for ROH in the event that he had remained on staff. Why let it all go to waste, right? Gabe talked about his ideas for each of the ROH wrestlers, and described how the shows would have played out under his watch.

Sapolsky is trying so hard not to be bitter. I honestly don’t think he is bitter, but probably had his feelings hurt a little bit. He clearly misses his job, but there is a sense of relief that he can now reclaim his life. Gabe talked about this at the end of the interview.

Sean Oliver had an easy job directing this DVD, as he mostly sat back and let Gabe ramble on about something he is clearly obsessed about (in a good way). Gabe’s passion for Ring of Honor is so evident; it is almost a tragedy that he is no longer associated with the product. Those who have continued to follow ROH know that it has continued and thrived without Sapolsky’s influence. Changes have been made, and there has been a noticeable change in direction when it comes to the flow of matches at Ring of Honor events. Most fans are clinging onto ROH because they love it, but I think most people would agree that there is something missing. Gabe doesn’t appear to have any ambition to work in the wrestling business any more, and that is unfortunate. Hopefully once his batteries are recharged, Gabe can find a new home in the wrestling biz. He could certainly use his talents to turn a different promotion into a success, and develop a whole new crop of superstars.

However, if this is the last we see of Gabe Sapolsky, I would just like to say THANK YOU for booking six plus years of unbelievable wrestling matches. Thanks for being a booker that respects the fans just as much as the wrestlers, and puts all of us ahead of himself. Thanks for appreciating the marks, and embracing the internet. Thanks for doing your part to save professional wrestling. Thank you, GABE.

Go to www.KayfabeCommentaries.com to purchase this and more than a dozen others.

Gabe’s Book of ROH Secrets
What He Did. What He Didn’t.
Available at www.KayfabeCommentaries.com
Reviewed By: Alan Wojcik

Since February 23, 2002 Ring of Honor had one person always associated with the product be it doing DVD commentary under awful assumed names or as the head booker. This past October that all changed when ROH’s financial people namely Cary Silkin decided Gabe Sapolsky was going to be asked to leave the promotion he helped make into an internationally known company. In addition Sapolsky stopped booking the Florida based Full Impact Pro promotion which was ROH’s sister promotion. For what appears to be the only time, Mr. Sapolsky sits down to air out what happened and what he had planned for the next months with KayfabeCommentaries.com for the DVD release Gabe’s Book of ROH Secrets.

The KC.com host as always is Sean Oliver and he gives Mr. Sapolsky an open forum to address how ROH came to be after ECW folded, his booking style and how he even became the booker, the way he wrote and produced the DVD’s, video wires and how the move to Pay Per View helped/hurt ROH. He talks going into the day he was asked to leave he had told Silkin he was going to make several changes including website content, booking “event” moments on the shows and dropping hype phrases he relied on for years. This isn’t Sapolsky’s first time working for KC.com, he did a Guest Booker DVD in which he booked the WWE’s revival of ECW. This time the booking is what would have been on the DVD’s if he had been running things in ROH. As comfortable as he seems in front of the camera, he also comes off as someone who is still trying to figure out what the hell happened. Sapolsky holds nothing back in addressing his feelings for the ROH fans and the talent he had at his disposal and what the future held for each of the top stars like Tyler Black, ROH World champion Nigel McGuiness, Austin Aries, Jimmy Jacobs, Davey Richards, Erick Stevens, Roderick Strong, the ROH Tag champs El Generico/Kevin Steen and others to be talked about. The following ROH events are discussed as “fantasy booking” in which Sapolsky opens up his loose leaf binder he used for booking:

Like I mentioned its “fantasy booking” since Sapolsky mentions in the opening segment his last show he booked was 10/25/08 “Ring of Homicide 2” event and the last DVD he produced was “Glory By Honor VII” 9/20/08 event from Philadelphia. Watch this segment and then check out the ROH website to see how much of his stuff made it to the actual DVD taping. Doing that made the DVD more educational. I have never been a faithful watcher of ROH so Oliver asking Sapolsky to run down the state of ROH when he was let go was extremely helpful. This DVD is highly recommended to ROH fans who want to see behind the curtain in a way they may never see again. You can buy this DVD on www.kayfabecommentaries.com where you can check out upcoming DVD’s like YouShoot: Kevin Sullivan, Inside the Office with Rene Goulet and Ringside with Vader.