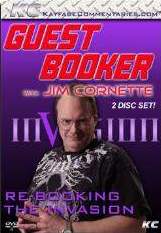 A few years ago, when Kayfabe Commentaries director Sean Oliver came up with the Guest Booker concept, he must have been holding a tennis racket in one hand and a Louisville slugger in the other, while thinking deep heterosexual thoughts of the legendary Jim Cornette. The idea that some day, if he worked really hard, he could one day call up Jim Cornette and ask him to be the subject of a video from his popular DVD series. So Sean Oliver set his plan in motion, preparing for his destiny, producing high-quality “Guest Booker” DVD’s with great minds like Kevin Sullivan, Gabe Sapolsky, J.J. Dillon, Gary Hart, Raven, Greg Gagne, Jerry Jarrett, and Bushwhacker Luke. It was all a great build towards the moment that he would finally get to sit down with the greatest mind that professional wrestling has ever produced – Mr. James E. Cornette!

You could never silence Mr. Cornette on any issue, and the first portion of this 2-disc set focused on many subjects near and dear to Cornette’s soul. The interview includes lots of stuff about his start in wrestling, details on how business used to be done, his booking philosophies, his part in the development of Ohio Valley Wrestling, and a little background information about the state of professional wrestling in 2001. Vince McMahon had just won the Monday Night War by literally purchasing WCW (World Championship Wrestling) from AOL/Time Warner and essentially owned the wrestling business. The entire wrestling world was finally about to get the one storyline they had been dreaming about for years, a major invasion gimmick where fans would get to see WWF vs. WCW and the possibilities were limitless. If you thought the McMahon’s couldn’t botch this one, you’d be sorely mistaken.

So eventually Sean Oliver pointed Jim Cornette’s attention towards the task re-booking the ill-fated WWF Invasion angle from 2001. Does the phrase “don’t get me started?” ring any bells? Cornette went on a multi-hour rant about what happened, what didn’t happen, and what should have happened – if Vince McMahon really wanted to make some money from the storyline that the wrestling world had been waiting a decade to see. Cornette booked some major programs throughout the year, culminating in a WrestleMania extravaganza PPV which will shock and surprise everyone who watches it unfold. It was very interesting to see which wrestlers Cornette supported, and which wrestlers were not pushed as hard as you might think. Cornette scripted a clever twist that no one would see coming, which allowed the storyline to continue for a second year. What a genius!

Check out KayfabeCommentaries.com and experience this genius work his magic!

March 2001 was the end of an era when World Championship Wrestling, the former Crockett Mid-Atlantic territory of the previous decades, was sold by AOL/Time Warner to its chief rival World Wrestling Federation. This was what wrestling fans including me had been waiting for, the chance to see the stars of WCW finally face off with WWF stars in the ultimate WrestleMania. The “Monday Night War” wasn’t going to end, WWF would keep Nitro on the air and wage war with WCW, right? Anyone who has watched wrestling since 2001 and read the books and seen other DVD’s (a review on one will be written soon) knows what really happened. How WWF refused to buy out the top WCW talent contracts from AOL/TW for their face value, how it caved into pressure from its TV network to bury Nitro/Thunder and how internal pressure from his wrestlers and writers made Vince McMahon destroy WCW by that year’s Survivor Series PPV. Now thanks to the Guest Booker series from KayfabeCommentaries.com we get to find out what would have happened if the Invasion angle was handled correctly. The Guest Booker is the man who was running the WWF developmental program in 2001 Jim Cornette.

After giving host Sean Oliver background on his place in wrestling in 2001 and how he got his start in wrestling, Cornette spends two discs booking the Invasion storyline in his vision from the last WCW Nitro in Panama City, FL. Cornette goes forward with the reality that WWF bought out all of the WCW guaranteed contracts (I mean everyone from Hulk Hogan and Ric Flair to Goldberg and Eric Bischoff) and all were willing to do what they were asked by WWF and Cornette/McMahon. Plus the WWF was able to keep WCW Nitro/Thunder on the air and book house shows. I feel Cornette is perfect for this spot since he was in the company in several capacities (is that a word) and saw how bad things went from the moment Mike Awesome, DDP and Booker T showed up on WWE TV. He has the business knowledge having worked under great minds like Dusty Rhodes, Jerry Jarrett, Jerry Lawler, Bill Watts and well Vince McMahon. He has some interesting ideas, some great match ideas, some a bit far fetched, but its his Guest Booker show so I will oblige him and not bury them here. In between breaths (which are few and far between) Cornette gives his thoughts on Vince McMahon and his family, Vince Russo, Johnny Laurinitis and the rosters of WWF, WCW and ECW. Bottom line: this is the best Guest Booker DVD to date and that’s hard to say with the likes of Gary Hart, Jerry Jarrett, JJ Dillion and Raven also in the series. Next up on the website for release is YouShoot with New Jack and Timeline: History of the WWE 1983. Checkout www.kayfabecommentaries.com

Kayfabe Commentaries once again is providing us with another great topic that anyone with half a brain could easily make interest with, as opposed to what we witnessed back in 2001 from the WWE. The man this time in the “Guest Booker” seat is one of the most outspoken & cleverly-minded individuals that has lived through decades of wrestling history from all over the United States & has worked in some of the biggest companies all in behind the scenes roles. Jim Cornette’s opinions being shared come from millions of experiences in all facets of the wrestling world & from a guy that totally understands “Booking 101.” Jim will talk about his background, his past bookers, & understandings of their various styles, guide you through the changeovers in the business that have happened in the last thirty years, as well as how to apply them into his booking of the biggest wrestling opportunity of all time. It’s WCW vs WWE in 2001. How can it be done to draw the most money & build the best fan base ever? Let Jim talk for almost three hours about this & fascinate the listener.

Clear & crisp commentary during the entire discussion between Sean Oliver & Jim Cornette. Dolby Surround in two channels. Basic setup with both men sitting down in front of the camera. The graphics & chapters are once again displayed, in addition to what is being booked is shown on the screen. KFC makes this topic completely understandable & easy to follow along.

For almost three hours, listen to Sean Oliver introduce Jim Cornette to the scenario. Jim will give a pretty-detailed discussion about his background in the business & all the things he found out as he began going from promoter-to-promoter & every wrestling company. Jim shares the comparisons from all the leading bookers from across the country & the changeover as to what we have now in script writers. He also will note that the main thing back in the day that bookers were striving for was to draw money, to get people to buy tickets, & fill up buildings, where as now it is how many dolls you have for sale or how big the quarter hour rating can be. Realizing the mentality that the average wrestling fan in the year 2001 realizes the insides of the business, Jim cleverly shares booking ideas & the swerves that created believability & excitement to hook the fans, plus sell the most tickets. We all remember how screwed up the entire “Invasion” angle was, some terming it the biggest & most-wasted opportunity of all time. Jim easily takes the simple idea & builds it for one solid year culminating at WrestleMania X-8, where the biggest epic battles for the wrestlers jobs are all on the line. Through serious build-up & easy logic, unplanned title changes, & “screwjob” endings as well as the utilization of the best wrestling stars in dream match situations, the results of this wrestling angle should no doubt be a thriving hot year for business, as well as a solid foundation when building up the future years with the new talent coming through. Listen to Jim as he tells us how it all can be done.

Get this DVD. This is the best ever KFC production yet, and they didn’t even have to do any research. The topic is so simple, and with Jim Cornette handling the discussion there is never going to be a dull moment. As a matter of fact, some stuff said was so interesting that I actually would back up my DVD just to hear if what I just heard was indeed what he said. Jim is fantastic in his role.

Sometimes it’s always good to suspend disbelief, which for the most part today is virtually impossible. This production produced by Kayfabe Commentaries can bring that great feeling within you.

As always, anytime KFC provides us with a topic like this, the results are always very interesting to the listener. In this case, Jim is great, sharing all the experiences he has had everywhere in his wrestling career, and melding it together into the biggest wrestling time period of all-time…or what it should have been. To put it in the words of Jim Cornette when asked about the WWE & their WCW Invasion angle, he could answer it in three very easy words, “They Blew It.”

This outstanding DVD, “Guest Booker With Jim Cornette: Rebooking The Invasion” is currently available via www.KayfabeCommentaries.com.