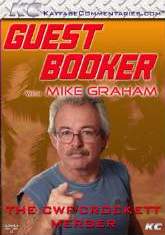 Not knowing very much about Mike Graham, I was prepared to really hate this DVD. All I knew was that he was the son of legendary wrestler/promoter Eddie Graham, and was an okay wrestler working for his dad’s territory. I honestly didn’t think he could draw me in and entertain me, but I can safely say that I was pleasantly surprised.

Kayfabe Commentaries director Sean Oliver asked Mike Graham to reorganize the late 90’s merger between his father’s Championship Wrestling from Florida and the Carolina-based Jim Crockett Promotions. In reality, twenty years ago, Crockett failed to capitalize on the opportunity and effectively killed the Florida territory. Most of the Guest Booker DVD’s go into great detail about picking a roster and setting up a full year’s worth of storylines, before booking a super-card type event. This DVD, perhaps to its credit, saved only small segment at the end of the DVD to talk about what Graham would have done if he were in charge during the merger. The rest of the 2 hour video was basically a shoot interview talking about the history of the Florida territory, the career of Eddie Graham, Mike’s stint with World Championship Wrestling, and the state of professional wrestling today. I ended up learning a lot from this one, and I know you will too.

During the 1970’s and 1980’s wrestling was hotter nowhere on the planet than Florida, home of Eddie Graham’s Championship Wrestling from Florida. Superstars like Dusty Rhodes, Mike Graham, Dory Funk Jr, the Brisco Brothers (not the current ROH stars) Hiro Matusda, the New Breed, Magnum TA, Lex Luger, Bruiser Brody and Steve Keirn were rolling in money and fans. Then suddenly Eddie Graham died and Jim Crockett Promotions (Mid-Atlantic) made an offer to jointly run Florida using the NWA stars to brighten things up. But that went sour fast and CWF’s legacy can only be seen on WWE DVD or On Demand.

Thanks to Kayfabe Commentaries we can find out how things should have been done. Mike Graham is the lastest member of the GUEST BOOKER visitors. However Graham and host Sean Oliver spend more than 3/4 of the 90 minutes alloted for the DVD talking about Graham’s past in the business from his days in the CWF locker room and booking office to his time working for WCW. He tells some great stories, stuff not the average fan would know about the Benoit/Malenko/Guerrero/Saturn/Douglas departure of 2000. The stories are great and could be a DVD on their own, but when you are supposed to be doing BOOKING its way off topic. Seriously the guest booking is in the final moments of the DVD. No matchmaking, no PPV or supershow planning like the previous Guest Booker DVD’s. The only thing keeping me from trashing this DVD is the respect I have for the Graham legacy in wrestling and Mike tells some excllent stories about his dad and Florida (where I cover wrestling.) Next to be released from www.kayfabecommentaries.com are YouShoot: Bob Holly and Missy Hyatt‘s Pajama Party w/Lacey Von Erich. their next YouShoot is scheduled to be Jim Cornette.